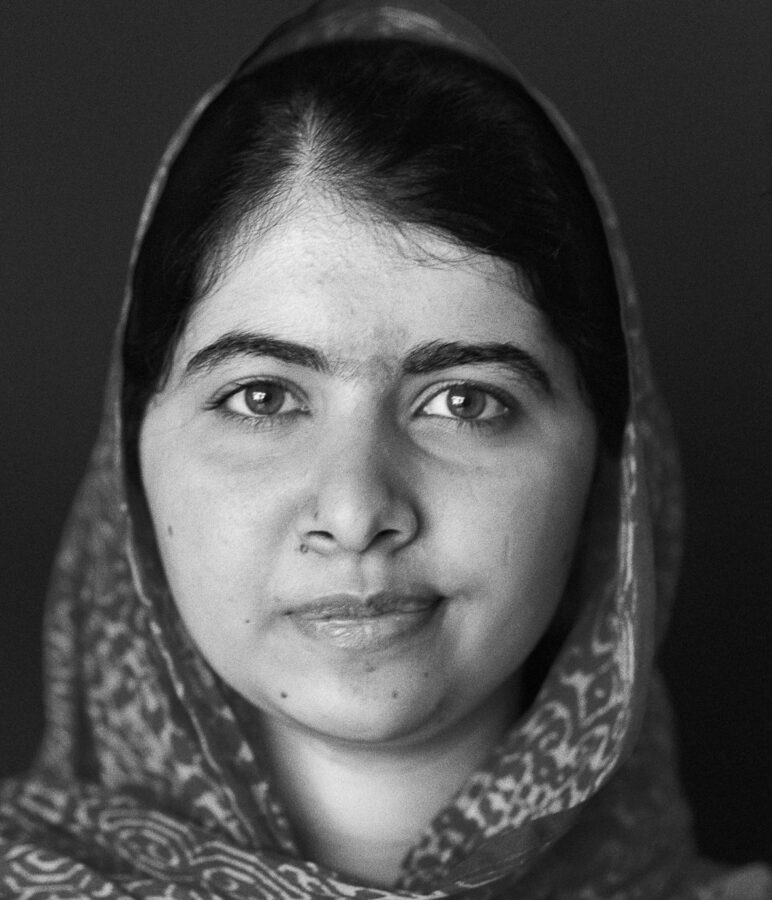 Taliban gunmen shot her for attending school. She became a prominent advocate for girls’ education, a Nobel laureate and a bestselling author. Malala Yousafzai brings her message to the South Bay.

Malala Yousafzai, the youngest Nobel laureate and world-renowned activist for girls’ education, who survived a Taliban assassination attempt, said her father inspired and supported her from the beginning.

“My dad is a feminist and women’s rights activist in action,” she told a packed auditorium last week during her final Southern California appearance in the Distinguished Speaker Series.

Unlike most men in patriarchal Pakistan, where traditions and tribal codes prevail, Malala’s father, Ziauddin Yousafzai, believed girls should have the same chance at an education as boys.

Malala’s father swam against the cultural current and celebrated the birth of a baby girl – a traditional disappointment – going so far as to add her name to a family tree that stretched back 300 years but was devoid of a female name.

With the love and support of her father, Malala attended school and thrived in the classroom. “I loved speaking like teachers,” she said. “I loved giving lectures.”

That all changed in 2007, when the Taliban took control of the Swat valley. Malala, who was 10 years old at the time, was banned from attending school. The fundamentalist regime made its opposition to girls’ education a cornerstone of their terror campaign, destroying some 400 schools. Malala said she cried often as she watched her younger brothers head to school while she had to stay at home.

Determined to go to school, she defied the Taliban and started an anonymous blog for the BBC, “Diary of a Pakistani Schoolgirl.”

As she and her father advocated more publicly for girls’ education, they attracted the attention of the media – and the Taliban. On the morning of October 9, 2012, a Taliban gunman shot 15-year-old Malala in the head, an incident she refers to as “the attack.” She was flown to the UK for her recovery and remembers very little of the trip except waking up and hearing doctors and nurses speaking English.

“I had two questions. ‘Where’s my father and who’s going to pay for this?’ I don’t have money,” she recounted.

Her family arrived a week later. Malala said her father felt a deep sense of regret and wondered if he should have stopped her from speaking out.

“I told him he made the right decision. I wanted to speak out and continue to speak out,” she said.

“It was that moment when I decided I want to be an activist, not just my right to go to school, but the right of all girls to go to school. I’ve been doing it ever since.”

In 2013, she and her father founded the Malala Fund, which works with local advocates around the world to provide quality and free education to girls. Malala has written several books, including her bestseller, “I Am Malala: How One Girl Stood Up for Education and Changed the World.”

“I was lucky. My father did not stop me from learning,” she said. “If I had been born in a different household, my life would have been totally different,” said Malala who was 17 when she was awarded the Nobel Peace Prize.

Like all her Southern California appearances, last week’s event was sold out.

Abigail Martinez, 12, who came with her mom, said Malala’s activism inspired her quest to change the dress code at her Catholic school so girls can wear pants just like the boys.

“She taught me to speak up,” Martinez said. “It can always make a difference, even if it’s one sentence.” ER