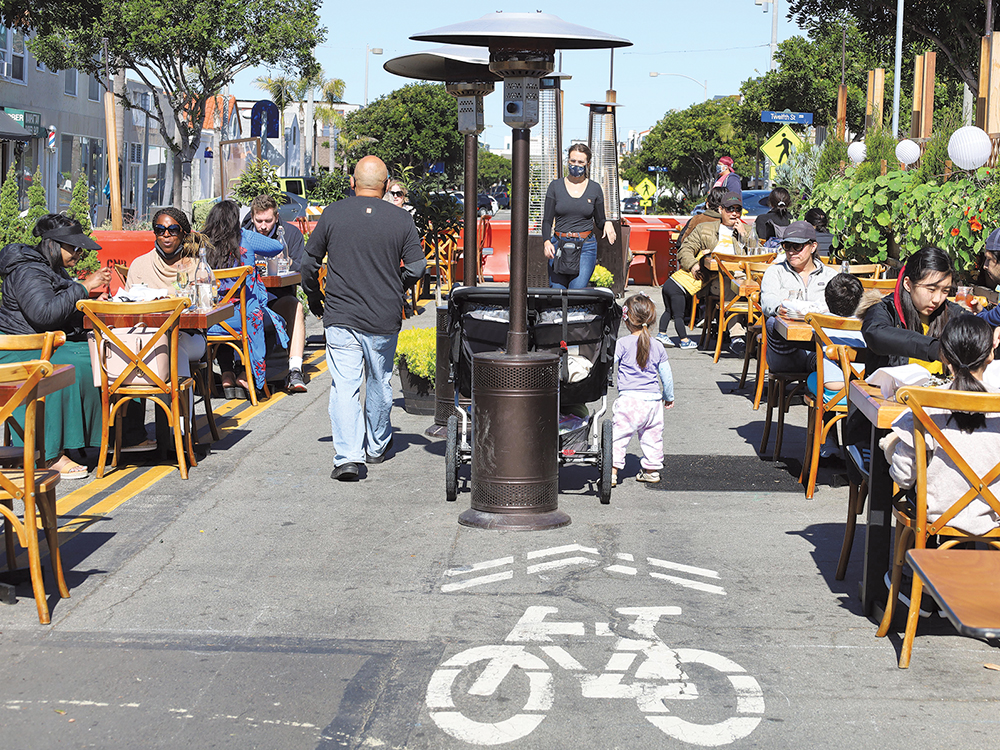 Manhattan Avenue in its brief tenure as a outdoor dining locale. Photo by Kevin Cody

The Manhattan Avenue outdoor dining experiment is over. The city on Tuesday afternoon issued a brief statement saying the closure of two downtown city blocks that allowed restaurants to expand outdoor dining to the street would end later that afternoon.

Mayor Suzanne Hadley, who was an ardent proponent of the street closure as a means of helping local businesses, said that the experiment had run its course.

“During Covid, our city staff and council have worked hard to pivot and adapt to new ways of aiding our business community, as well as create rewarding experiences for our residents and visitors,” Hadley said. “The Manhattan Avenue street closure was recommended by many in our community. Council was anxious to try it. We wanted to see how a temporary street closure might work and what issues it would reveal. Well, now we know. The closure worked well in some ways, but not so well in others.”

The closure, which went into effect February 12 on Manhattan Avenue between 12th Street and Manhattan Beach Boulevard, was intended to boost restaurants and nearby retail stores struggling after two months of COVID-19 restrictions emanating from LA County. The idea arose from a subcommittee that included councilpersons Richard Montgomery and Steve Napolitano, the Manhattan Beach Chamber of Commerce, the Downtown Business Association, and representatives from resident groups.

Montgomery said he also received a lot of positive feedback from residents, both downtown and elsewhere in the city, who wanted the closure to remain.

“In addition, the Downtown Business Professional Association informed us that all retail stores except one had positive sales since the closure was installed,” Montgomery said. “Closures, albeit temporary, did help our downtown businesses and their employees.”

The council received positive feedback from restaurateurs on those two blocks at last week’s meeting. But restaurateurs on Manhattan Beach Boulevard, which was not closed, accused the city of picking winners and losers. Sylvie Gabriel, who owns Love and Salt, told the Council she took a troubling walk on Valentine’s Day.

“I found that four out of the five restaurants within the Manhattan Avenue closure had more than 100 percent seating capacity of their operating permit for interior capacity,” said Gabriel, whose restaurant was at 39 percent capacity due to restrictions.  “One operator was at 167 percent of seating capacity…. And so this is what I’m very concerned about, the inequity that the closures create for restaurants. I think it’s dangerously tipping the scales.”

Carol Perrin, head of the Downtown Residents Group, cited traffic and safety concerns as reasons to end the experiment.

“What I think has been missing from the conversation is the fact that the biggest constituency downtown is the residents,” Perrin said. “There are approximately 2,000 or so residents who live downtown intermingled with the businesses….What we’ve lost in all of this is the balance, because these street closures have really crossed a line, to the benefit of a handful of restaurant owners and to not only the detriment but to the danger of downtown residents.”

Montgomery said there was no solution that would have met all the concerns so the experiment had to end.

“The geography of our downtown does not allow for long-term closures that will not disrupt traffic,” he said. “I hope that all of the restaurants are allowed to reopen indoor dining soon.” ER