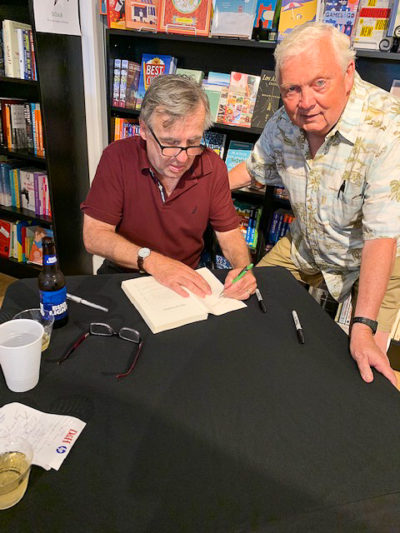 Retired Colonel Jim Montano of Huntington Beach came to Pages bookstore Sunday afternoon just as his fellow Vietnam veteran Charlies Reilly was finishing up a brief talk on why he started writing letters to the editor 20 years ago – and how he ended up as the Los Angeles Times undisputed champ of published letters, with more than 150 and still counting.

“Do you have his new book here?” Montano asked the clerk behind the counter. When she nodded yes, he handed over his credit card and cheerfully charged the $21.85 cost for the instant pop culture classic “Man of Letters.”

“I agree with everything he’s saying,” Montano said.

As soon as Reilly finished his talk, he was treated to every author’s dream scenario: a line of people snaking around crowded bookshelves with their copy of his new book, waiting patiently for an autograph and a personalized message of hope and inspiration.

These eager readers came from as near as all three beach cities and as far as West Hollywood and even Oxnard, 75 miles away from downtown Manhattan Beach.

The waiting line included a few senior citizens, many prime-of-life professionals and 10-year-old Leon Phillspson, who admitted he only occasionally reads letters to the editor but intends to read more of them after hearing Reilly’s talk.

They came in three waves: the early 4-5 p.m. shift that gobbled up the free brownies, cookies and champagne as avidly as they digested Reilly’s wisdom about the art and science of getting letters published; the middle 5-5:30 shift that concentrated on asking Reilly questions about his unique  literary niche; and the late stragglers who had trouble finding parking because of the bike race and volleyball tournament that clogged Manhattan Beach Sunday afternoon.

The late shift stayed so late kibitzing with Reilly that Pages general manager Kristin Rasmussen, after several polite requests, literally had to turn out the lights to get them to leave at 6 p.m. when one of the last unicorns – a successful, locally-owned bookstore — finally closed. And even then, the party/book signing simply moved to the store’s patio, where the left-over food and drink was quickly disappearing. To quote some back-in-the-day hack named Ernie H., it was a movable feast.

No matter which shift they came in, they all had one thing in common: they had come to Pages to buy a copy of Reilly’s third book, a collection of his letters to the LA Times, with a few to the Orange County Register thrown in because that’s where he actually got started, and a couple to the Providence Journal added as a nod to his home state of Rhode Island.

“Man of Letters” is a spicy stew of historical facts, in-your-grill opinions and sly, sarcastic asides that taken together, puncture the Times’ daily barrage of politically correct news and columns.

John Conway of Manhattan Beach was typical of the more than 100 fans who made their way to Pages over the two hours of Reilly’s book signing. A Manhattan Beach resident since 1974, he said he reads the letters to the editor of the Times on a near-daily basis. More than a decade ago he noticed that somebody named Charles Reilly, also of Manhattan Beach, seemed to have a letter printed on a monthly and sometimes weekly basis.

Conway felt a sense of pride and connectedness knowing someone from his little corner of sprawling LA was carving out a platform for his opinions in the hallowed pages of one of America’s preeminent newspapers. It helped that Conway found himself agreeing with 90 percent of the center-right opinions Reilly was dishing out in taking on the ever more liberal Times.

“He always seemed to be right on point, at least from my perspective,” Conway said. “Not too far in right field, not too far in left field. I really admired him from afar.”

So Conway was stunned several years ago when his wife Chris invited a long-time friend of hers, Ilene Pendleton, over to their house. She brought along her husband Reilly, whose name  Conway recognized as soon as he was introduced. “I’ve been reading your letters for years,” he told Reilly. “I’m a big fan. I try not to miss any of them.” 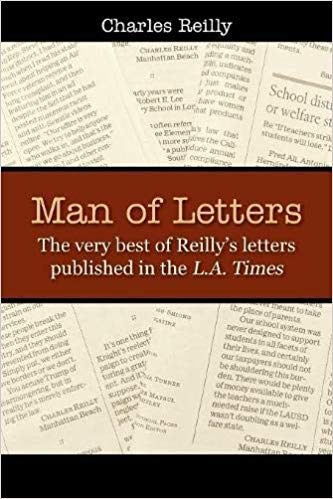 “Man of Letters” by Charles Reilly.

But it turned out he had been missing a significant percentage. He had no idea Reilly had also been publishing letters in the Sunday Calendar section, as well as the week-day letters on the Op-Ed Page and the Saturday letters in the sports section.

Conway favors baseball metaphors. In Conway’s humble opinion, Reilly has yet to hit a grand slam, but came close recently with a letter in the sports section praising LaVar Ball for being a good father after the trade of his son Lonzo Ball from the LA Lakers to the New Orleans Pelicans. This was after a series of Reilly letters over the last several years slamming Ball for being a loud-mouthed braggart and attention hog who was making life more difficult than it had to be for his three hoops playing sons, Lonzo, LiAngelo and LaMelo.

Coincidentally, in his short talk, Reilly had mentioned that particular letter, noting that it unleashed a torrent of criticism from readers who felt he was suddenly being too easy on the senior Ball.

Reilly noted that while other letter writers sometimes responded to his letters, that was a practice he scrupulously avoided.

“My feeling is I have my opinion and you have yours,” he said. “If someone else writes a letter that I don’t like, I just let it go. I don’t respond.”

Reilly described the first letter he ever wrote to the Times, in 1999.

“The Times ran an editorial essentially blaming Pope Pius 12 for the Holocaust, and I couldn’t just let that go,” Reilly said. “My argument was that the people responsible for the Holocaust were Adolf Hitler, Henrich Himmler, Hermann Goering and all those wonderful people that ran Germany at the time.”

Reilly acquired a love of history from his mother Henriette and frequently refers to historical events to make his points in his letters.

He makes the point that America is a republic, not a true democracy, and Sunday he told the story of King Louis 16 of France to illustrate the distinction.

“King Louie 16 was found guilty of high treason against the French people in January 1793. When it was time for the penalty phase, 360 legislators voted for death by guillotine, and 360 voted for life – meaning exile or imprisonment,” he said. “There was one person left to cast a vote, who happened to be his own first cousin the Duke of Orleans. With a heavy heart, he said, it was his duty to vote for death. That was true democracy in action.”

His fellow Vietnam vet, Colonel Montano, served with Reilly in Vietnam and says he is exactly the same person he was nearly 50 years ago, offering strong opinions backed up facts and research.

“He was a very bright guy, a natural leader and a solid citizen who really cared about the world around him,” Montano said. “That hasn’t changed at all.”