As Manhattan Businesses rally to open, Council tries to help 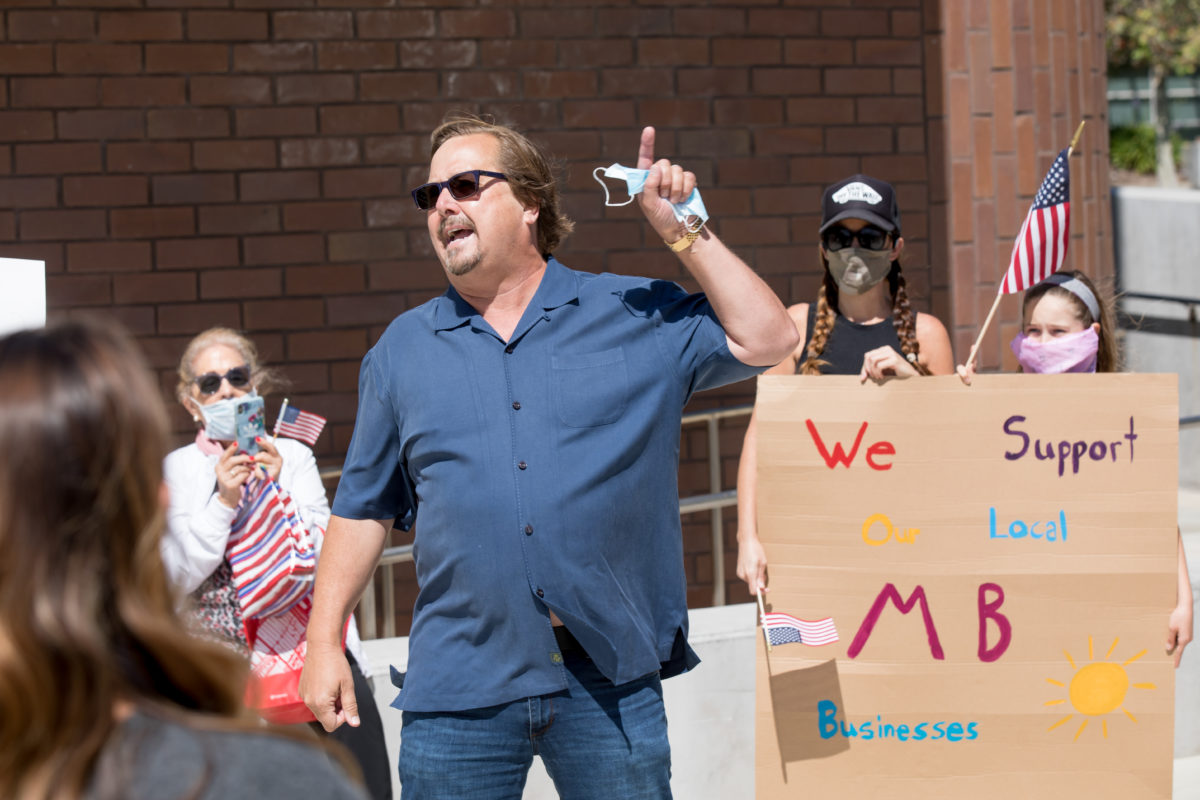 Something occurred Tuesday afternoon in downtown Manhattan Beach that hasn’t happened in two months. A group of people gathered.

More than 100 people attended a protest aimed at gaining support from City Council to allow businesses to reopen throughout the city. The protest, organized by local Realtor and former council candidate Joe Franklin, featured speeches from Mayor Richard Montgomery, Councilperson Suzanne Hadley, and several local business owners. The crowd, most but not all wearing masks and uniformly packed together in defiance of the six-foot social distancing requirements that are part of state and county public health orders, gathered by the Light Gate plaza near the library on Highland Avenue. 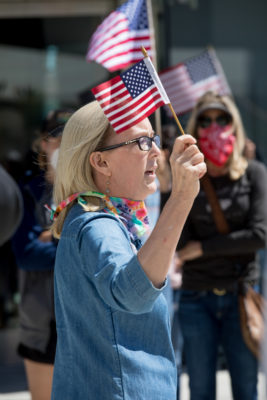 Hadley, who has been the most adamant voice on City Council advocating the flouting of the state and county health orders on behalf of businesses, told those gathered that she felt the pain of small business owners because she once ran a brick and mortar retail store in Wisconsin. Her daughter, she said, is back in Wisconsin right now and will begin work as a waitress on Saturday.

“And I tell you there are people from the state of Illinois streaming over the border into Wisconsin to get their nails done, their hair done, to get a massage, to get their physical therapy, to have a beer and have a restaurant meal,” Hadley said. “So I would like people streaming in our city to take advantage of our retailers and our residential businesses and our restaurants.”Safely, though, just like the Mayor said, let’s do this safely and responsibly and wear our masks….We can do this and we can get our economy back on track.”

Montgomery said the council supports business citywide, not only downtown. But he also urged patience.

“We want you all to reopen safely and legally,” Montgomery said.

Two police officers monitored the protest from across the street. Montgomery noted afterward that he was “disappointed to see lack of social distancing and lack of masks.” 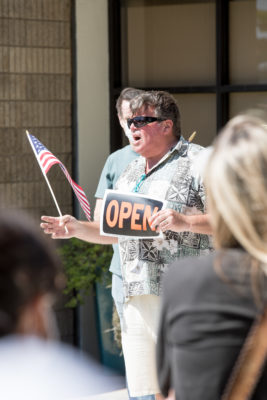 Realtor Rob Stroyke, who didn’t wear a mask, expressed respect for the law but defiance of the public health order.

“Life is about living, not just staying alive,” Stroyke said. “You shouldn’t live with fear; live with faith. Screw fear. And if I want to live my life with my system and not wear a mask — masks are not protective. They are not healthy for us. God created us to breathe oxygen, not carbon dioxide. I appreciate the police are here and respect the laws. We are all law-abiding citizens. We all care about our community. I care about every single business. In 1992 there were 21 boarded-up businesses in Hermosa Beach from a recession and 10 in Manhattan. I don’t want to see that again. Let’s get this opened up. I think we should have Manhattan and Hermosa be a sanctuary city for small businesses.”

Following the protest Stroyke said, “I don’t think wearing masks in public is wrong.  I think what is wrong is forcing people to wear a mask outdoors.  Now, when we are talking about businesses and indoor facilities, I think it’s respectful and our duty to wear masks in order to keep others safe.”

“We need to get behind our local politicians and they need to get behind us,” she said. “It takes a lot of courage and a lot of guts to open a store and pay rent and hope that your taste and your interests and your love and your passion for whatever people are going to want that are going to come into your store…And it’s very hard to do. And in three months they can crush us, and we can’t let them do that. So we all need to stand up.”

Ascher said the public health orders were not only killing businesses but the very fabric of the community.

“Everyone is missing each other right now,” she said. “I have a mom who is 85 and I haven’t seen her since February because she’s bought into this whole thing. And it’s not right. When in the time of our history of America have we quarantined the healthy?”

“They said we need to flatten the curve, and we flattened it like nobody has ever flattened a curve,” he said, as Franklin made a stomping motion behind him. “And somehow, the politicians — not at the local level — said ‘We’ve got to find a cure.’ We are not going to find a cure in a month or two to get us going again.”

Zislis said downtown businesses would die if not allowed to open immediately. 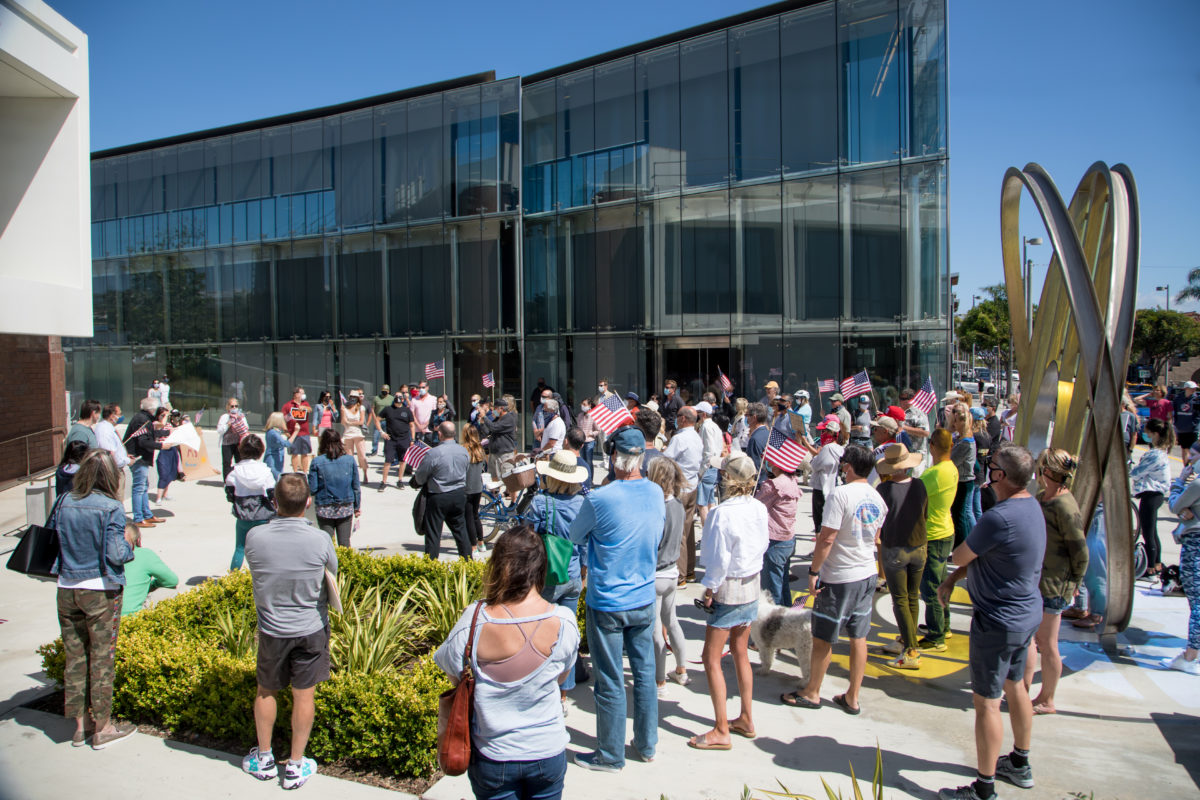 Councilperson Susan Hadley addresses a crowd of more than 100 who gathered in downtown Manhattan Beach in support of opening local businesses. Photo by J.P. Cordero

Manhattan Beach has had a static number of COVID-19 cases for the last month, with 74 confirmed cases as of Wednesday and two deaths. But Los Angeles County has remained a national hotspot, with 1,176 new cases and 76 deaths confirmed on Tuesday, the day of the protest, and another 1,324 cases and 57 deaths on Wednesday. The County’s 40,857 COVID-19 cases would rank 18th in the world were LA County a nation, just behind the Netherlands and just ahead of Qatar; the 1,970 confirmed deaths caused by COVID-19 would rank 20th in the world, behind Ecuador and ahead of Switzerland.

On Tuesday night, the City Council met, over Zoom, and the main item on its agenda was a proposal to send a letter to the LA County Board of Supervisors and Governor Gavin Newsom seeking the reopening of Manhattan Beach businesses.

“I’m a little disappointed others have not fought for us to carve out the areas that do have low numbers that aren’t seeing the spikes or the infection rate that others have,” Napolitano said. “And I think that’s the issue. It boils down to yes, there are state guidelines. Yes, the county goes along with that. The thing is, we’re not L.A. City and all these other cities. We’re meeting the criteria. We’re ready to go forward with safely opening.

And the issue is that we don’t want to be held back by the rest of L.A. County in being able to open.”

Hadley said regardless of the proposed letter, businesses should be allowed to open by Friday in order to be ready for Memorial Day weekend.

“Even kicking this down the road past this weekend is just another nail in the coffin of some of these businesses that really need three days of income from this weekend,” she said. “So I don’t know the protocol, I don’t know what can be sped up, but our businesses are relying on us now. I’m happy to plow ahead and let the other cities come behind us…It’s every city for themselves as far as I’m concerned.”

Councilperson Nancy Hersman said she fully supported local businesses opening but said that it had to be done both safely and lawfully.

“It’s not something that can be done in a couple days. As much as we want to see your businesses open and thriving, we need to do this the right way,” Hersman said. “If in fact, the Supervisor cannot help us, if the Governor says you have to wait until June 1 or to some other date, then in my mind, it’s not for us to defy the Governor’s orders… I took an oath of office to say I would support the laws of the State of California. So I will. That’s where I stand.”

Both Hersman and Councilperson Hildy Stern expressed concern that opening without authorization from the state and county could create repercussions, such as local restaurants permanently shuttered by the LA County Department of Public Health.

“We want our businesses to survive,” Stern said. “We just have to be careful. We don’t want consequences that could actually harm our businesses in the end.”

During public comments, Zislis said such conversation “scared the bejesus” out of him. He told council members to “grow a set.”

“Letter writing is a waste of time,” he said. “We’re back to being on the time schedule of L.A. County. I’m begging you to let the retailers have a fair chance to survive against the big corporations…. Please let us open. Make a vote, make a stand. Let us open tomorrow, okay? And as far as the restaurants and the state agencies, I’ll take that risk, okay? It’s not on you.”

“I can’t even believe I’m saying this because I’ve raised four children as a self-described law and order gal,” she said. “I love our police department. I am all about rules and structure….So I’m not one to take health orders from the county lightly. But do we want to be on the right side of history? I do. I know that you all care. And to those of you watching at home, I know my colleagues care. But I would like to remind my colleagues, none of this going on in California has been approved by the California legislature, voted on by voters, or adjudicated by any court in California, let alone the Supreme Court of California. So I see no reason not to challenge at this point, what I see as closer to misguided bullying by the county than health orders from a PhD. with a doctorate in social welfare, which is [Public Health Director] Barbara Ferrer. If retailers opened this Friday, I think the earth would continue to spin on its axis.”

The council, with the exception of Hadley, who grew so exasperated she threatened to go to bed at one point, agreed to write a letter focused on allowing retailers to open. Napolitano asked Hadley to wait until Thursday morning’s meeting, at which point he would “be there” should the letter not prove effective.

“I don’t mind the letter as a starting point,” he said. “I’ll tell you right now it’s not an endpoint to me.”

Montgomery and Hersman hand-delivered the letter to Supervisor Janice Hahn on Wednesday. Hahn, in an interview Wednesday afternoon, said that she’d received the letter and supported its intent.

“It has always seemed to me that it is not fair that huge retailers like Target and Walmart are allowed to operate while small retailers are limited to curbside pickup,” Hahn said. “Swimsuits can be sold in Target, why can’t they be sold at a small business in Manhattan Beach?  We picked winners and losers during this crisis and the winners were big box stores and the losers were our mom and pop shops. That needs to change.”

“We need the state to amend its public health order,” she said. “I am writing to Governor Newsom and urging him to allow all retailers statewide to reopen as long as their customers and employees wear masks and practice physical distancing. I will also be working with Dr. Ferrer to see how we can put this plan in place in LA County as quickly as possible.”

The council will reconsider the matter at 8 a.m. Thursday.