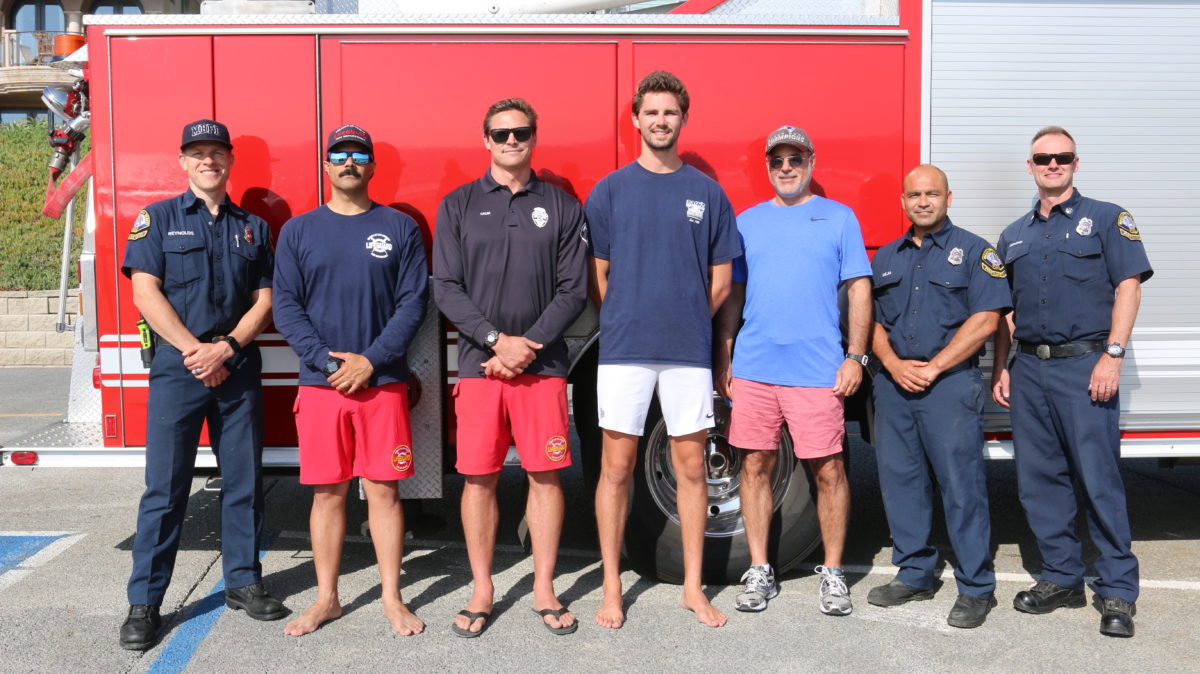 Matt Donatucci arrived at the beach at Rosecrans at 7 a.m. on the morning of May 12 because he wanted to play volleyball for free. If Donatucci wasn’t a cash-strapped student, Jeff DeCoste would have died that morning.

Donatucci is a 19-year-old Manhattan Beach native who is studying psychology at El Camino College. One of his volleyball coaches at the college was the director of a CBVA tournament that morning and had offered to waive the tournament fee if Donatucci helped set up.

DeCoste, a 58-year-old Hollyglen resident, had come to the beach to run. He’s an avid runner who has completed 19 marathons and trains almost daily. DeCoste is a familiar figure locally. He works at the El Segundo Air Force Base and, along with his family, is part of the American Martyrs parish in Manhattan Beach.

He’d just finished his morning run at a little past 7:30 a.m. He was in the El Porto parking lot. He bent down to tie a shoestring and everything suddenly went black.

Donatucci was setting up a court when he heard screams. He looked up from the beach and saw two guys in wetsuits yelling, “Lifeguards! Lifeguards!” Another man was prone on the ground. Donatucci saw the nearest lifeguard was a ways down the beach, maybe a half mile. He happened to be taking a first aid class this semester at ECC and had just learned CPR. So he took off running.

“I booked up the stairs and ran over to him,” Donatucci said. “I just kind of knew what to do. In first aid class, we practice on dummies. It was just kind of muscle memory.”

Someone in the small crowd that had gathered around the scene said he thought the man was already dead. Donatucci knelt down and began doing hands-only CPR, a form of resuscitation that consists solely of chest compressions. It has proven to be as effective as full CPR in reviving someone suffering cardiac arrest.

“Slowly his color came back a little bit,” Donatucci said. “At about a minute thirty his eyes kind of came to life.”

LA County Lifeguard Greg Crum had come on duty at 7 a.m., when beach operations begin, as part of a unit assigned to Manhattan Beach for the first two hours of the day. He had also heard the shouts.

“First I looked out at the water,” Crum said. “A guy screamed again, I looked again. I thought, ‘Yeah, there he is. Okay, that’s something.’”

Crum drove quickly across the sand, and pulled up next to the concrete embankment below the parking lot. He saw a crowd gathered around a fallen man and a young guy doing compressions. He called 911, jumped out of the truck, grabbed an “AED” —  an automated external defibrillator —  and an airway bag (which contains an oxygen bottle, bag valve masks, and other respiratory equipment). He tossed the gear up to bystander, leapt up the wall and over the fence, and took command of the scene.

“I instructed the young man to continue compressions,” Crum said. “I exposed his chest, shaved his chest, applied the AED pads, and the AED kind of did the rest — it analyzed his heart rhythms, and advised a shock. So I made sure the patient was clear and delivered the shock.”

Lifeguard Ignacio Pagliaro had just left the lifeguard administration building at 26th and The Strand and was driving down Highland Avenue. He heard Crum’s voice on the radio saying ‘CPR in progress.’ He asked where. ‘El Porto,’ came the response.

“So I was like, ‘I’m right above that.’ I quickly made a left hand turn, planted sirens, and pulled up into the parking lot just as the first shock was delivered,” Pagliaro said.

Crum, impressed with how well Donatucci was performing compressions, had asked him to keep going after delivering the shock. He worked on putting a air bag valve mask on the patient to get him oxygen. Then Pagliaro jumped in, and took over compressions.

“I started pushing on the chest and after a little bit I realized his eyes kind of came to,” he said. “They had a look to them that made me realize he’s responding, and sure enough I hear a cough, agonal breathing. It was him, actually breathing. That’s when I realized, ‘He’s here.’”

He reached to check the carotid artery and found a pulse. With his other hand, he  could feel the soft thump of heartbeats.

“That’s when he came to, kind of wondering what was happening,” Pagliaro said.

Crum said he was impressed with how long Donatucci had been able do compressions.

“It’s really hard,” he said. “He was going on adrenaline, I assume. And then while Iggy was performing compressions, he came back to life —  he returned to spontaneous circulation.”

“I wasn’t even thinking,” Donatucci said. “I was just kind of in a zone. It was pure adrenaline.”

“By the time we got there, he was awake, talking to us,” said firefighter paramedic Bo Reynolds.

The paramedics, who’d arrived four minutes after receiving the  call, took over from there, transporting him in their ambulance to Little Company of Mary hospital. They were astonished at the scene they’d arrived to —  what they call “a Good Samaritan” rescue, joined by the lifeguards quick response. It’s rare for them to arrive on a scene already so well handled.

Firefighter paramedic Rudy Mejia kept asking, only half joking, “Is that it guys?”

MBFD Capt. Tom Desmond noted that the incident showed how simple hands-only compression CPR can make the difference between life and death.

“It’s a perfect example of someone being able to help out, and then the lifeguards get there and we had a good outcome,” Desmond said. “A total save. We don’t get enough of those.”

As the ambulance left and crowd dispersed, somebody said to Donatucci, “Wow. That was f…king sick.”

Donatucci went back to the beach and played volleyball. It didn’t really sink in what had happened til he got home that afternoon, when he suddenly felt totally exhausted.

“It was like, ‘Holy crap, what just happened?” he recalled.

“Was that your Matthew who just saved my husband’s life?” she asked.

“We are just so grateful to him, and for the innocent bystanders who got Matt’s attention, and the lifeguards, and the fire department —  they all went above and beyond and saved my husband’s life. And kudos to El Camino College for teaching CPR,” DeCoste said. “We are speechless. There are just not words enough.”

On June 6, Donatucci, the DeCostes, the lifeguards, and the firefighter paramedics all met back at the scene of the save. DeCoste, who has returned to  work and that day had walked the family dog a mile and a quarter, looked up at Donatucci, who is 6-foot-5.

The lifeguards reminded him of his first words after returning to life. “I was just jogging and laid down to take a rest,” he’d told them.

By coincidence, June 1 to 7 is National CPR Awareness Week.

“It was a true team effort,” said Crum. “One of our core values in the LA County Fire Department is teamwork, and it’s not just among our lifeguard division, it’s amongst the public, and Manhattan Beach Fire, and each other… Everybody just did everything, and it just worked out.”