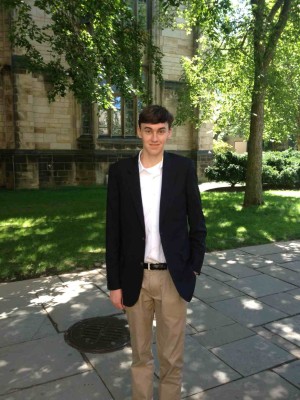 Manhattan Beach native Frederick Muth, 17, earned a perfect score on the 2013 AP Calculus BC exam. He is currently a freshman at Yale University. Courtesy of Shaena Engle

On the morning of May 8, high school students across the country sat bent over a three-hour cumulative exam on Advanced Placement Calculus BC, the top level of math offered in high school.

For Frederick Muth, a Manhattan Beach resident and then a Loyola High School senior, it was just another morning of a cumulative AP exam that he had methodically studied for all throughout the year.

Earlier this month, Muth, 17, learned that he was one of just 11 test-takers in the world to earn a perfect score on the exam. Approximately 104,000 students took the exam in 2013.

“I remembered feeling pretty confident on the exam, but I would never have dreamed I got a perfect score,” said Muth, now a freshman at Yale University. “It just seems like one of those things that doesn’t really happen, at least not to mere mortals such as I.”

According to the College Board statistics, nearly 46 percent of the students who took the AP Calculus BC exam in 2013 received a five–or an “A”–on the exam. The mean score was 3.73.

The exam, which consisted of multiple choice questions and free-response questions, posed little surprise to Muth, who independently began preparing for the exam earlier on. He perused his calculus textbook and studied previous years’ AP exams provided by his teacher. His fellow classmates provided motivation as well.

“To keep the pace, our class even met in the morning during January, when seniors do not have classes while they perform a senior service project,” he explained. “I guess I’ve always been pretty self-motivated studying, no tutors or anything, and I enjoy figuring out a test or course’s expectations and machinations. I’m a direction follower, and this outlook seems to help a lot on standardized tests.”

Muth also credited Loyola High School — an all-boys Jesuit college preparatory school in Los Angeles — for its comprehensive AP program, laying down a strong foundation for his study habits. He was named the valedictorian for Loyola Class of 2013. 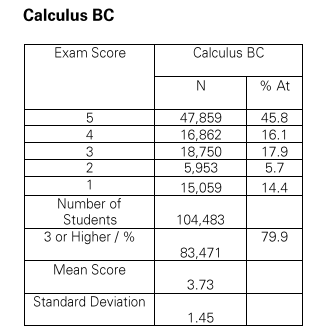 “[Loyola’s] goal of educating the whole person and living life as a man or woman for others has really spoken to me, and I will always keep their teachings in my heart as I approach life,” he said. “Loyola is a truly amazing school, and I’m so indebted to it for where I am.”

Students’ AP exam scores are revealed on the “AP Students” official website over the summer. Muth said although he knew he had scored a five on the AP Calculus BC exam, he was unaware of his perfect score until a few weeks ago, when his parents received a letter at their home in Manhattan Beach.

“I was absolutely thunderstruck,” he recalled.

Muth is currently a prospective Classics major at Yale University, but he is considering adding his passion and talent in calculus to his curriculum.

“Latin and Greek, actually, hold the primary seat of academic passion in my life, but I’m taking Multivariable Calculus right now and am toying with the idea of a mathematics double major,” he said. “I want to continue taking classes and exploring other areas of math: computer science, number theory and statistics.”

Muth’s career path is still up in the air. Regardless, he plans to wield his aptitude for higher math beyond schooling.

“I’m not sure what I’ll be doing after college, but I love exploring new ways to think about things and approach the world, which is why calculus has been so enthralling,” he said. “And I hope to still be able to do a few integrals and Taylor series when I’m someone’s old, eccentric, trivia-laden grandfather.”