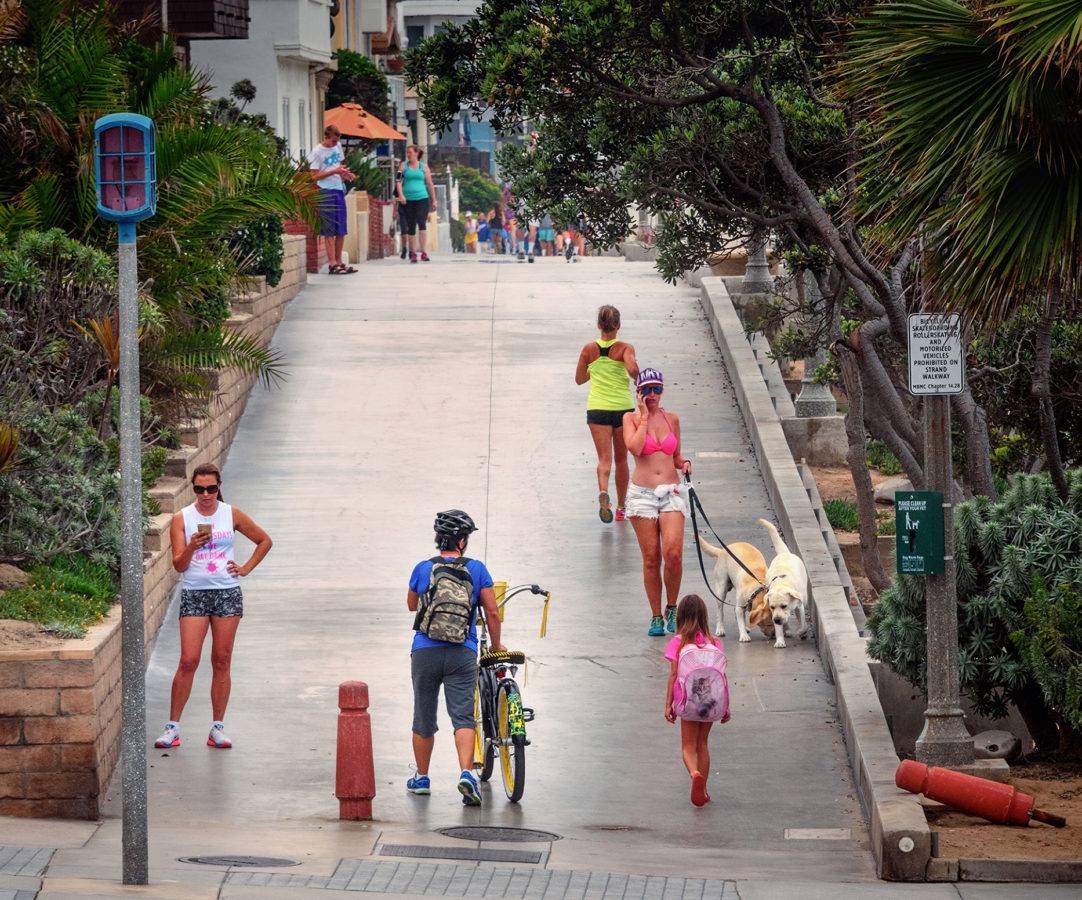 The Manhattan Beach City Council voted to immediately reopen the city’s portion of The Strand in a 3-2 vote Thursday morning.

The vote came in the wake of an extension of LA County’s “Safer At Home” public health order released Wednesday, which extended most social distancing measures first implemented in March, including the closure of bike paths and boardwalks.

“It’s very unclear what the county intends here because they have, in three different releases, three different statements,” Barrow said. “So the boardwalks have appeared on the protocol but not the order. And they were in the press release. But no explanation.”

Mayor Richard Montgomery offered an explanation beyond the County’s order.

“Ours is not a boardwalk,” Montgomery said. “Don’t confuse ours with Venice or Redondo Beach.”

“We’ve done a lot of research on that this week because the County is all over the place on this,” Barrow said. “And what we do know is The Strand is not mentioned. They have had plenty of opportunity to add The Strand to their prohibition. But The Strand is different than the boardwalk.”

Councilperson Steve Napolitano made the motion to reopen The Strand. He said that since the city took the action to close The Strand, the city likewise had the authority to reopen it. He said other areas of the city, such as the Ocean Drive (dubbed “the new Strand” by MBPD last month due to its heavy bike and foot traffic), have seen increased activity without a corresponding spike in new novel coronavirus cases.

“I understand that we want a doctor’s note or mom and dad to tell us it’s okay to open this,” Napolitano said. “But we don’t need a higher entity to tell us something we already know. And in terms of benchmarks and proof as to whether or not we can open this, I think we just go to our own examples of where Ocean Drive and Greenbelthave have not resulted in huge increases and spikes in infection rates in Manhattan Beach. The growing body of evidence that being outside is less [contagious] than being inside.”

Napolitano also said that MBPD shouldn’t be focusing its attention on enforcing walking on The Strand when other areas in the city need to be patrolled for more serious crimes.

“Let us deal with reality here, and the fact is we’re having a very, very hard time enforcing the rules on The Strand to stay off The Strand,” he said. “We were having a hard time keeping them off the beach. We already said we’re not going to enforce the mask requirement on the beach. And this maintaining the Strand as being closed and keep policing that is just a huge burden on staff….Let’s stop pretending and open it up.”

Councilperson Nancy Hersman said her reading of the County’s order was that The Strand was included as a walkway.

“My concern, and I know it’s not a concern of everyone on Council, [is that] we follow the County’s rules,” Hersman said. “I would like to see something from them to tell us that we should open the Strand.”

Councilperson Suzanne Hadley said that if there was any uncertainty the city should err on the side of opening.

“If it’s a close call between freedom and control, freedom and enforcement, we should choose freedom,” Hadley said. “If there is any wiggle room in the orders, I say we charge forward. In 1964, Ronald Reagan, a great Californian, said this is a time for choosing. Elon Musk and people are choosing freedom, choosing to go back to feed their families, reopen their businesses. I would like to do so much more. I’m on the record publicly: If there are small businesses —  you know, people have to do what they feel is right. And people who don’t feel comfortable going on The Strand, going on the beach without a mask, are free to choose to not go to those places.”

“I think the public would vastly prefer to have The Strand open,” Hadley added. “They are asking for it to be open. I don’t want to ask for permission. I would rather ask for forgiveness…Let’s open The Strand.

Councilperson Hildy Stern said the city should foremost follow public health guidelines. She attempted, unsuccessfully, to add a friendly amendment to Napolitano’s motion to monitor data for 14 days after the Strand’s re-opening so it could be closed again if an uptick in Covid-19 cases occurred.

Stern also noted that unilaterally opening The Strand would have an impact on neighboring communities, particularly Hermosa Beach, which has taken the County’s order to mean it cannot reopen its Strand.

Montgomery said that with the beach now open —  and not seeing a huge influx of people —  the next logical step was to reopen the Strand.

“The beach activity is a good thing,” Montgomery said. “They want us out and active and I appreciate that. It took a long time to get there; we’re there. And yesterday’s lack of a crowd is a good thing…. If the beach were closed I would have more support for keeping the Strand closed. The fact the beach is open, people want to get out and exercise along that pathway and [it’s] elevated away from the beach, that’s why I’m in support of the reopening.”

The vote to re-open passed 3-2, with Hersman and Stern opposing. Hersman asked to make a statement afterward explaining her vote.

“Since our mayor pro tem also made an ideological statement about our liberation and freedom,” Hersman said. “So just a statement: Dr. Thomas Frieden, the former director of the CDC, has said, ‘We’re not reopening based on science. We’re reopening based on politics, ideology and public pressure. And I think it’s going to end badly.’ So if anybody wants to know why I voted no, that’s why.”