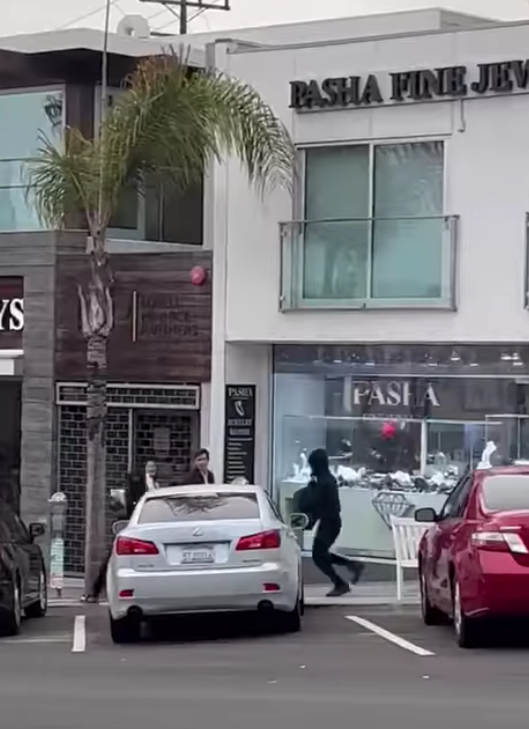 Eleven masked men entered a jewelry store last Friday at arguably the busiest possible time in downtown Manhattan Beach, early on a balmy Friday evening, and proceeded to conduct a “smash and grab” robbery, breaking cases throughout the premises and then running across the street to leave in three vehicles waiting in an adjacent alley.

The robbery took place at Pasha Fine Jewelry, on the 200 block of Manhattan Beach Boulevard, June 24 at 6:58 p.m. At least three of the men were armed, although no shots were fired, according to the Manhattan Beach Police Department. Images of the fleeing thieves were captured by a witness in a video that subsequently went viral on social media, sending shock waves throughout the community.

Both Mayor Steve Napolitano and interim Chief of Police Christian Eichenlaub issued statements aimed at calming public fears. They vowed that the suspects would be found and arrested. “This was not just a crime against a person or a business. This was a crime against our entire community,” said Napolitano. “An armed robbery in broad daylight in our downtown could have resulted in serious injury and death. To those who did it, please know MBPD is devoting every resource to catch, prosecute, and jail you. We’re going to add additional patrols in our downtown and throughout our commercial and residential areas. I want to assure the community that public safety is always your City Council’s number one priority and the MBPD has our full support.”

“Fortunately, no one was harmed during this incident,” said Eichenlaub. “However, the potential for what easily could have occurred if this situation escalated further weighs heavily on the community. There is no excuse for brazen acts of violence, and I empathize with those who were victims or witnesses of this crime. The Manhattan Beach Police Department is committed to bringing the suspects responsible for last week’s terrible crime to justice, and we are working diligently with our regional law enforcement partners — utilizing every resource at our disposal — to identify and apprehend these criminals. We will leave no stone unturned and will not rest until those responsible for this crime are jailed.”

As of Wednesday, no suspects had been apprehended. But MBPD Detective Ian Mikelson said that he and fellow detectives were pursuing several leads, and asked anyone if the public may have seen anything related to the robbery to share information with the police.

“We’re actively pursuing leads and seeking help from both the public and law enforcement agencies in and around Los Angeles County that may have had similar crimes,” Mikelson said. “Obviously, if anybody knows any of these guys that are responsible for it, that would be huge…The video that is making the rounds shows all these guys wearing masks and gloves. If anybody had any video of them prior to or after [the robbery] in which their faces were exposed or anything like that, we’d obviously be very keen to see it.”

Both Chief Eichenlaub and Det. Mikelson acknowledged that there has been an uptick in crime locally. The jewelry robbery is the second very public crime to occur in the last month. On June 2, a woman attacked a man with a machete in the parking lot outside Target. She was later arrested. 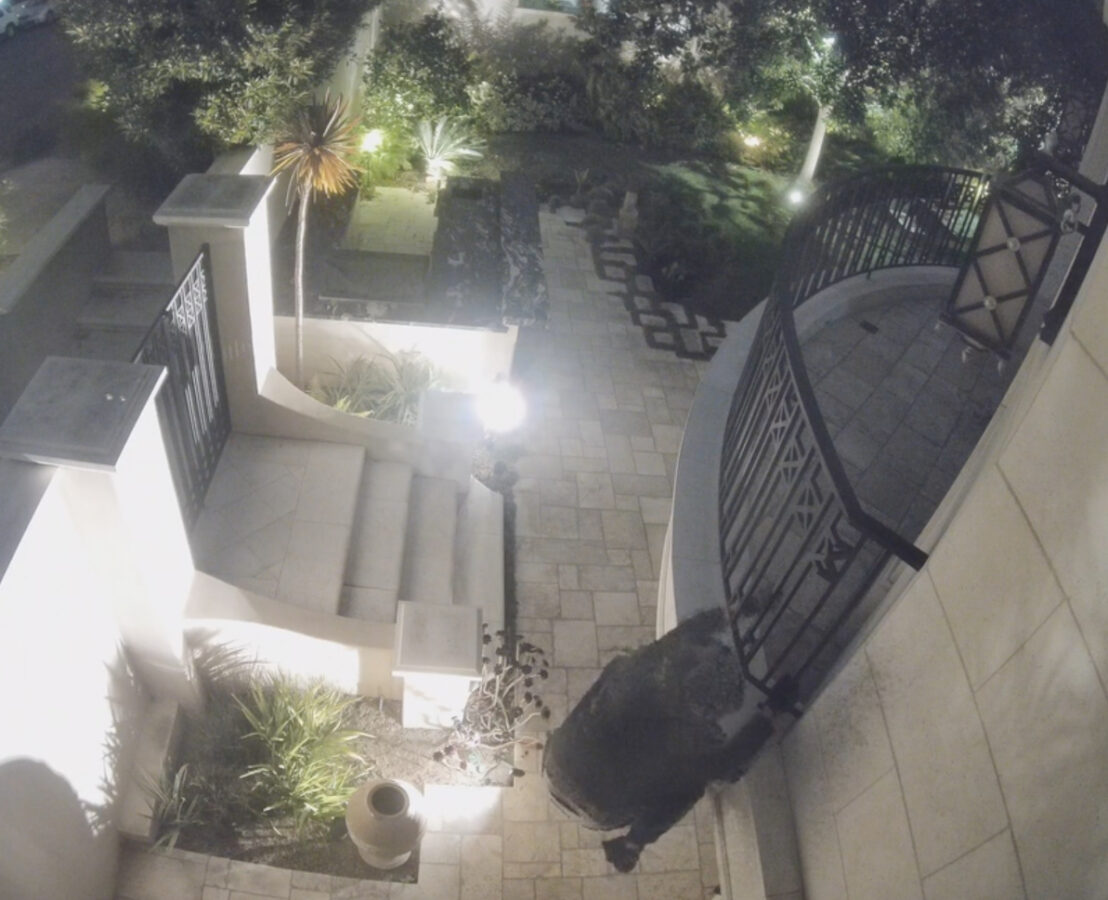 A burglar, part of a suspected professional burglary crew, climbs to a third story balcony to gain entry to a Hill Section home on June 3. Photo from security footage.

Mikelson said MBPD has seen an overall increase in crime over the past 18 months or so and these latest high-profile incidents are indicative of this larger trend.

“Obviously, this is a big issue for Manhattan Beach,” he said. “This is yet another example that crime like this can happen anywhere, despite how affluent or removed from that sort of thing people believe they are here in the Beach Cities. It’s going on everywhere nowadays, and people need to begin to take it seriously, and just be a little bit more vigilant. This is a county of 10 million people and unfortunately a large congregation of the criminal element, as well. And we have a judicial system that hasn’t really been that keen on keeping people in custody for quite a while now, so we are starting to see the results of this.”

Resident Mike Simpson is somebody who has long paid attention to local crime logs and noticed what seemed to be an increase in property. But the issue literally came home to him on the night of June 3, when burglars broke into his Hill Section home while he and his wife were in the lower level of their home’s three floors watching a movie.

“You see these little items in the newspaper, crime reports, and they say burglary on the 100 block of some street, broken glass, and it sounds like somebody threw a rock through the window, like it was nothing,” Simpson said. “When often the real story is something a lot stronger than that. I think there could be a little bit more awareness, more details, because then people in town can realize —  this can happen to you.”

That night, a Friday at about 8:40 p.m., Simpson heard bumping sounds, but because he works in the movies, he has a high level home entertainment system with speakers in the ceiling —  and as a result thought the sounds were part of the movie’s soundtrack. It wasn’t until his wife went upstairs and saw that the house had been ransacked that they realized they’d been burglarized. The home has an extensive surveillance system, so Simpson was able to watch the entirety of how his home was invaded. It took about 18 minutes and involved two burglars wearing hoodies, gloves, and N-95 masks, as well as a third man waiting in the street in a car. Both from what police told Simpson, and his own observations from the footage, it appeared to be a professional burglary crew. They first ran a check around the home’s perimeter, then were able to gain entry by climbing to the balcony to the master bedroom on the third level.

“According to police, the professional burglars always want to go to the master bedroom and the master bedroom closet, because that’s where the money and the jewelry worth stealing is usually kept,” Simpson said. “And they prefer to break glass and enter, because a lot of people, us included, don’t have the alarm set up to the glass because it looks unattractive.”

Police told the Simpsons they have made arrests of burglary crews from as far away as the far end of the Imperial Valley, 200 miles away. In Simpson’s case, the burglars were only after money and jewelry, ignoring multiple computers, speakers, and even an iPhone watch —  the latter likely because they were aware they could be tracked through the watch. They took about $5,000 worth of cash and jewelry, including family keepsakes, and an odd kind of watch that Simpson collected, from Germany, that keeps time by 100 minute hours.

“If anybody shows up with a decimal watch, you’ll know where they got it,” Simpson said.

The aspect that impacted Simpson the most was the sense of violation, and the realization that he had been living with a false sense of security. He is upgrading his home’s security system, but he’s also given a lot of thought to the increase in property crime in Manhattan Beach over the last few years. He believes the notoriety the town has received as privileged has helped put Manhattan Beach on the map for a lot of people, including criminals. But there is also the sheer demographic change that has occured over the past decade in which Manhattan Beach has begun to resemble “Beverly HIlls by the beach,” and is now known as such. Not coincidentally, Pasha Fine Jewelry, where the smash and grab took place, is located in Manhattan Beach but sometimes photographs its models in Beverly Hills.

Simpson, who has lived locally for 40 years, said he has spent a lot of time in Beverly Hills and though neither he nor most residents want Manhattan Beach to be like that city, there are lessons to be learned from how police operate there.

“I remember my first impressions when I was first going into Beverly Hills, that there was a very visible presence by the police,” he said. “It definitely gave off this vibe…I mean, it bordered on harassment. If your car was more than four years old there, they were going to pull you over. They were going too far, but they were doing it for a reason. They were projecting an aura that you do not want to try and pull something off here because you will be caught and it will not be fun.”

“We do not want to be Beverly Hills. That’s why I moved down here, to be away from a lot of the b.s. of Beverly Hills and places like that. But we have to acknowledge that Manhattan Beach has changed. I had to beef up my security and take measures to make it look not as vulnerable as it did, and with the police, there has to be a sense that if you do something here, you are going to get caught. Maybe it’s more license plate cameras, maybe it’s just more visible police on the street, on the beat, moving around the town.”

Chief Eichenlaub said that the police force is actually in the process of drastically increasing its staffing levels. The City has hired 12 new police officers during the last fiscal year and just this month authorized two more hires. But the chief said it takes the entire town’s efforts to achieve higher levels of public safety.

“While MBPD will do everything it can to keep Manhattan Beach a safe beach town, we ask you, our community, to be a part of the solution,” Eichenlaub said. “Please remain vigilant while in public places and be aware of your surroundings. If you see something, say something. Get to know your neighbors. Also, please remember to provide as much detail as possible when calling 9-1-1 to report any crimes or suspicious incidents you observe. Collectively, we can deter criminal activity and increase safety in our community.”

MBPD asks community members who witnessed the smash and grab incident, who personally took video or photographs, or anyone who has any information pertinent to this incident to contact Detective Mikelson at (310) 802-5121, or the MBPD Tip Line at (310) 802-5171 if you wish to remain anonymous.