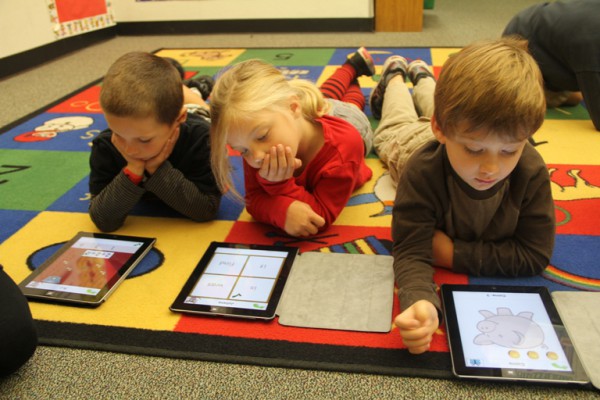 Just before 8 a.m. one recent Tuesday, Andy Caine wheeled a waist-high cart into his second-floor history classroom at Mira Costa High School, as the Beach Boys’ “I Get Around” played faintly in the background.

On the syllabus for the day: the First Amendment.

As the first period bell rang, Caine unlocked the cart.

“Come and get ‘em,” Caine said to his class of seniors, and stood behind his podium, on which he’s pasted a sticker reading, “Think for yourself. Question Authority.”

The students put aside their pens and notebooks and lined up at the cart to pick up an unconventional tool that school districts across the nation have been implementing into classrooms.

Each student grabbed an iPad and returned to his or her seat.

Caine is one of 43 Manhattan Beach Unified School District teachers chosen to try the $500,000 iPad pilot program, which started last fall. At Mira Costa, two English, math, science and social studies teachers use iPads, along with eight science teachers at Manhattan Beach Middle School and 27 teachers of different grade levels at each elementary school. The district purchased 560 student iPads (32 gigabytes and costing around $700 each), in addition to iPads for pilot teachers and administrators.

A quarter of the pilot costs are grant funded, while the district supports the rest. Later this year, the School Board will decide whether, and in what capacity, to continue the pilot.

Caine and pilot teachers implement iPads into their curricula two to three times a week, a total of 30 to 90 minutes. “I would use them every day if I had the possibility,” Caine said, as he brushed his finger across the screen of his iPad, flipping through the applications he uses in class.

That morning, Caine’s class of about 30 students split into small groups, each settling in a corner on campus. Outside, a dynamic quartet acted out the day’s lesson, demonstrating a protest in front of a church.

“Get out of here! This is a church, you’re interrupting mass!” another group member, Courtney Duong, yelled on camera.

The group, giggling, gathered around the iPad to playback the scene. Within seconds, they were filming the next scene – Connor Wright assumed the role of a police officer and arrested the protestors for disturbing the peace.

“This is unconstitutional!” McPherson yelled, on camera. Group members would later edit their video on the iPad using iMovie.

Later this year, Caine’s class will be assigned to create political campaign commercials.

Nationwide, schools are embracing iPads in the classroom, despite much data to prove its impact. Critics say that administrators, seduced by the “latest and greatest,” are too quick to implement technology into the classroom.

Regardless, classrooms, which have remained static for decades, are changing. “(The pilot program) is sometimes hard for people to wrap their head around because it has so much potential to change how a classroom looks,” said Ellen Rosenberg, Manhattan Beach Unified School District board president.

The program is one element of the district’s effort to shift its educational focus from the “three R’s” – reading, writing and arithmetic – to the “four C’s” – communication, critical thinking, collaboration and creativity, said Karina Gerger, the district’s 21st century learning administrator. “The four C’s move students to the forefront of being active participants in the global community,” Gerger said.

While data is still scarce, administrators maintain that technology is the future of teaching and will help build critical thinking skills and prepare students for higher education or the workforce. “These are the kids, at three years old, that are driving around in the back seat with smart phones, intuitively using technology,” Rosenberg said. “If we don’t have something in place, we’re going to be missing out.”

“It is our responsibility to do what’s best for our students, to prepare them for the future,” Gerger said.

At a time when school districts are bearing the brunt of a weak economy as the state continues to slash its education budget, some teachers and students find using district funds for iPads difficult to justify. “An iPad is simply another distraction and a waste of funds that should be used for electives and class trips to actually viable places of learning,” one student participating in the pilot program wrote in a district-administered survey.

Others can’t imagine class without it. “With a textbook, you only have a limited amount of information that you can look up and use,” said Mira Costa senior Katie Brown. “When you have the iPad, we can all be looking at the same thing on the Internet, and the Internet is so big that you can just do anything.”