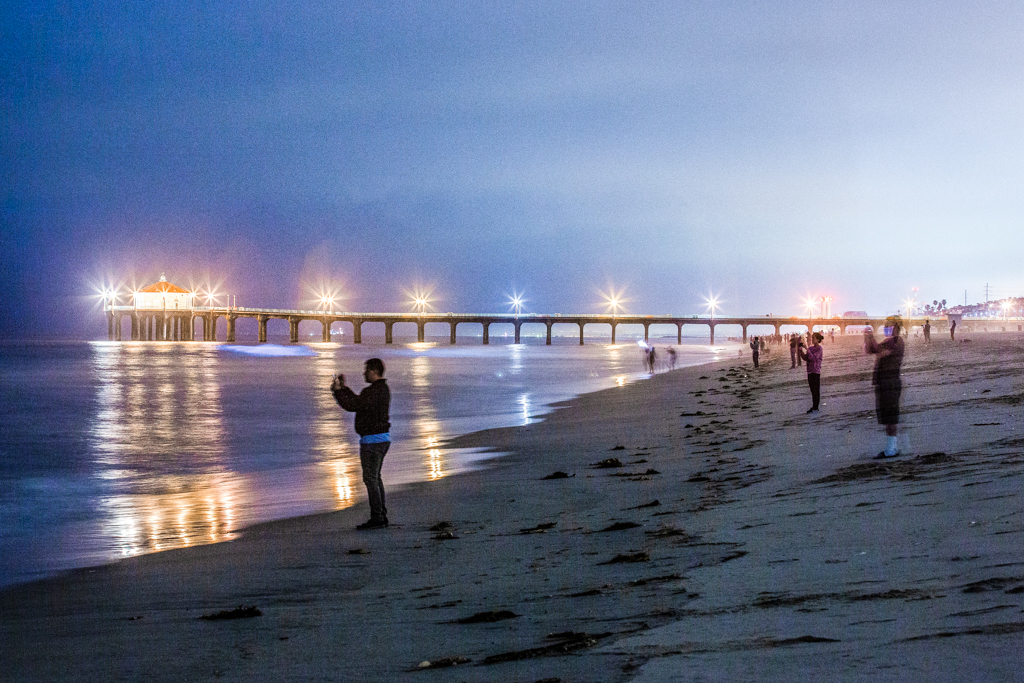 A red tide bloom spreading from Baja California to the Santa Monica Bay last month turned breaking waves bioluminescencet after dark, drawing large numbers of beachgoers, despite the beach closure. Many were been ticketed for violating the beach closure order. Photo by Brent Broza (BrozaPhoto.com)

On Saturday morning, April 4, Nick Winnie went for a little walk with his fiancee, three-year-old stepson, and dog in North Manhattan Beach. It was the third weekend since the statewide “Stay At Home” lockdown had been enacted. Winnie and his little family unit had been giving themselves 20 minutes of outdoor time every day.

“We have no backyard, we have no front yard, and we were not going on The Strand, because that wasn’t allowed,” Winnie said. “So we’d go walk, basically, through our residential neighborhood. And then we decided, let’s at least get a view of the ocean, so we walk down the hill towards Bruce’s Beach Park.”

The family arrived at the northeastern border of the park, which is on Highland Avenue, and were surprised at what they found: a few dozen people, most not wearing facemasks, working out, some in groups.

“We had been wearing our face masks,” Winnie said. “We were going on a walk; that was one of the only things that was still allowed. But the dog doesn’t know about the rules.”

The family dog, a three-year-old collie mix named Layla, spied the fresh green grass and immediately went for it. She went a few yards into the park, squatted, and defecated. Winnie stepped into the grass to clean up after her; his stepson, a couple of days from turning four and bounding with energy, immediately decided he wanted to roll down the hill.

“You know, he’s exuberant, he’s boisterous, and he decided I’m going to use this opportunity to roll down the hill,” Winnie said. “And we told him, ‘Stay right by us. We’re not going to go into the park. We’re just going to step our toes out onto the grass.’ So he says, ‘Okay, I’ll just roll right here.’ So he’s rolling down the hill, I’m picking up the dog poop, and bam! Like a blitzkrieg of local law enforcement arrives.”

Five or six officers raided the park all at once, including an officer on an ATV who approached Winnie’s fiancee. Winnie interceded and told the officer that he’d take the ticket, assuming it would be a warning or a small fine. The officer gave Winnie a citation and said the city would contact him.

Weeks later, a letter arrived, not from the city, but from the Santa Monica-based law firm of Richards, Gershon, and Watson. The fine, the letter said, was $1,000; appealing the fine required both its payment in full and a $1,500 deposit.

“I was just shocked at the size of the fine. So basically, you would need to throw down $2,500 just to do your appeal….This is just getting absurd,” Winnie said. “It’s like, ‘Okay, the city cites me for something, then they farm it out to a different law firm for the collection. I’m confused.”

The city issued 129 social distancing citations that week, and an as-yet-undisclosed number since. Another resident, a longtime local business owner who asked not to be identified by name, received another of those citations a few weeks later.

On the night of April 27, the man, his wife, and their two kids got a call from his father, who lives on The Strand, urging them to come down to check out the bioluminescence occurring in the ocean. The rare occurrence was at its peak that week and the water was glowing bright blue.

“So I load up my wife, my 17-year-old son and my 20-year-old daughter,” the man said. “We come down there and we’re looking at it and it was absolutely beautiful. It was a perfect night. It was a Monday night at 9:30, as we’re sitting on the deck, we’re looking at it and were like ‘We’ve got to go down there and look at it.’ So we trudge across The Strand, down the sand down to the shore. We’re splashing our hands in the water. We’re watching the bioluminescence, watching the waves break. It was electric blue, just incredible, and I’m thinking ‘I’m Father of the Year.’”

His son, a junior at Mira Costa, was taking AP Earth Science and decided to write a paper on the whole phenomenon. “And again, I’m like, ‘Right now this is the best it gets, right?’ For most teenagers, they don’t want to have anything to do with you,” the man recalled. “We’re down there as a family to check out the water…about 30, 35 minutes. Then we are done, we are going to walk back, just going, ‘That was super cool.’ So we walk up 16th Street, up the stairs, boom, into three police officers.”

The man explained what he and his family were doing and asked the officers to just give them a warning, but to no avail —  both he and his wife received citations.

“I would have gotten three if I had actually told them that my daughter was over 18,” the man said. “They didn’t ask, I didn’t tell.”

A few weeks later he received a letter from the law firm in Santa Monica with two $1,000 fines. He was so outraged he didn’t even bother filing an appeal, but instead refused to pay and sent the city a letter expressing his frustration. He wrote that if he did pay the fine, he’d prefer to donate the money to downtown businesses impacted by the pandemic, rather than a fine in which a Santa Monica law firm profits.

“I told them this would be better off as a warning of a citation,” he said. “We didn’t put anybody in any sort of jeopardy. We went down as a family we left as a family. We’ve been locked up together as a family for these first three months.”

Winnie, who is a teacher for the Los Angeles Unified School District, received his $1,200 government stimulus check within 24 hours of receiving his $1,000 fine in the mail.

“So basically I’m robbing Peter to pay Paul here,” he said. “My local government is taking away the assistance of my federal government. Luckily, I am still employed and I’m in decent shape compared to how many people are getting hit right now, and I don’t take that for granted at all. But, you know, for me as a teacher…it’s still a financial hit.”

Winnie is particularly frustrated because he and his fiancee have taken social distancing measures very seriously, always wearing masks in public and abiding as best they can by all safety measures. Yet he sees most people locally not wearing masks, people playing volleyball on the beach in blatant defiance of existing restrictions, and no enforcement.

“I know these things happen, sometimes you’re in the wrong place at the wrong time,” he said. “But I find it absurd that it’s that high of a fine. It’s a time when a thousand bucks really matters. You know, it’s not cheap to live here. In this neighborhood, there’s a lot of people, $1,000 will mean nothing to them. But for renters in the neighborhood, it’s a hit.”

Winnie did get further correspondence from the law firm saying the appeal deposit of $1,500 would be waived, but he still had to pay the $1,000 fine in order to file an appeal. “And I’m sure they’re going to cash my check and they’re not going to read my two page appeal,” he said.

Mayor Richard Montgomery said the City Council closed its parks early on in the pandemic literally as a matter of life and death —  at that point, he noted, the understanding of COVID-19 transmission was still in its early stages, and the city wanted to take no chances.

“We didn’t know how the transmissions worked,” Montgomery said. “We didn’t want anyone in the parks, right? That was the whole intent: closed means closed.”

The fine amount, Montgomery said, was the advice of City Attorney Quinn Barrow and represented the highest fine the city could issue per state law. When people ignored park closures in the early days of the Stay At Home orders, the City Council asked the MBPD to step up enforcement.

“Our plan was to get the message out that we’re taking it seriously,” Montgomery said.

Manhattan Beach attorney Walter Urban, though he declined to say if he was representing anyone who’d been fined, said he believes the city is vulnerable to a class action lawsuit for overstepping its bounds. He noted the City of Indio lost a class action suit in 2018 after it had turned over the handling of municipal code violations to a third party law firm, much as Manhattan Beach has done in this instance with Richards, Gershon and Watson. One Indio woman, for example, was fined $6,000 for having chickens in her backyard.

Urban said Manhattan Beach’s fines and the use of a third party law firm are likewise suspect.

“This may be procedurally improper,” he said. “It’s basically a due process issue —  a denial of due process. And I think that the fine is outrageously high.”

Montgomery said the city will have a legitimate appeal process, noting that the City Attorney’s office would handle administrative reviews of each fine and could have the ability to reduce amounts. If those appealing are not satisfied, the mayor said, they can then appeal to the courts.

“So they get a chance at an administrative appeal and a second bite of the apple with a judge,” Montgomery said. “And the judge will either support what cities are doing —  not just Manhattan Beach — or not. All of us did this. The cities were trying to get the message out for the protection of everyone.”

Montgomery said one of his guiding principles as mayor during the pandemic was that he’d rather overreact in the implementation of restrictions than underreact in a way that could cost lives and deeply regret it later.

“I don’t know what a judge will do,” he said. “I am waiting to hear when it happens, whether the judges have upheld the fines the city did during the pandemic, or if the judges come back and tell us, ‘Well, now we’ve gotten past this, we’re not going to do it.’ Because that’s a terrible message to the rest of us the next time, when the second or third wave of the pandemic hits.” ER