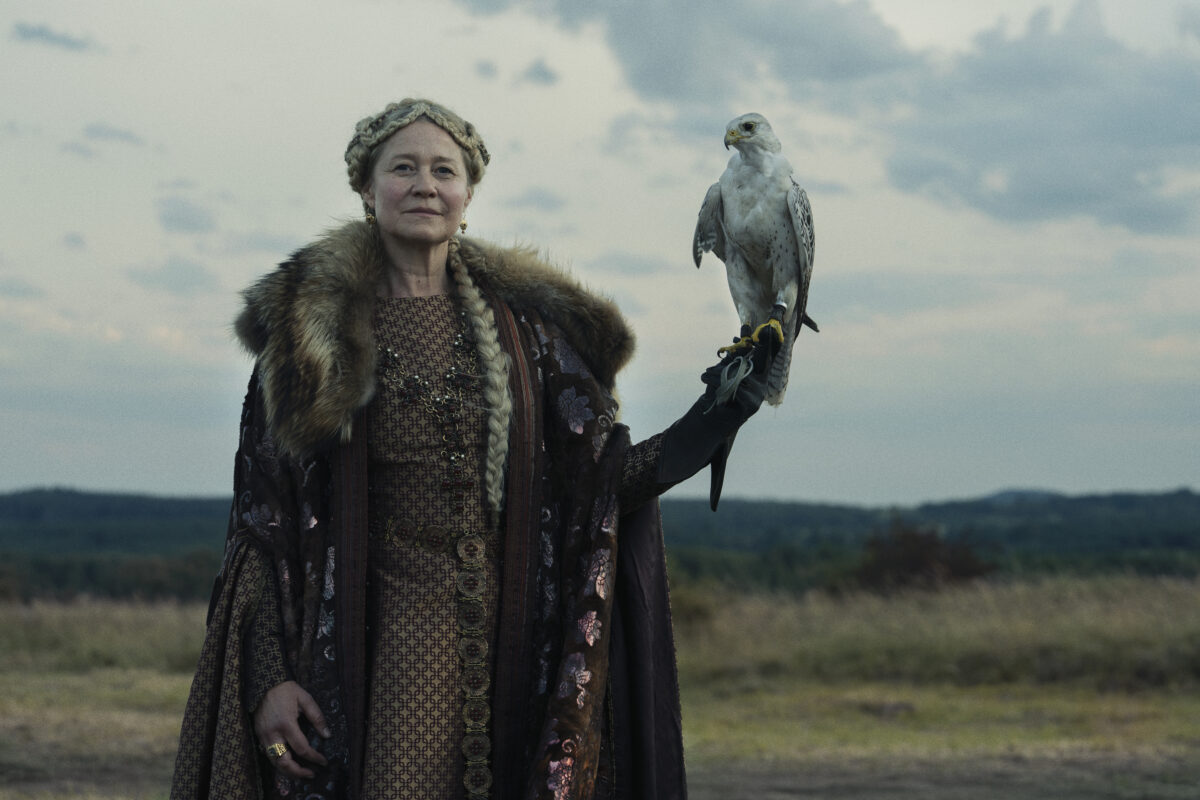 Trine Dyrholm as Margrete in "Margrete: Queen of the North." Photo courtesy of Samuel Goldwyn Films.

I love good historical fiction where most of the stories are good, although they usually send you straight to Wikipedia for confirmation. No matter the subject, the collision of reality and its fictionalized version can be pretty disappointing, but if well produced or written, they are interesting nonetheless. “Margrete: Queen of the North” written for the screen by Jesper Fink, Maya Ilsøe, and Charlotte Sieling and directed by Sieling, is a fanciful and fascinating rendering of a period in Scandinavian history led by a woman who, amazingly enough, held the power over Denmark, Sweden, and Norway (and even for a time, Finland) without possessing the throne of any of them.

This much is true. Queen Margrete pulled off the unprecedented feat in 1397 of aligning the constantly warring nations of Denmark, Norway, and Sweden into a peaceful alliance called the Kalmar Union. She recognized the danger posed by the Germans who gathered on their borders and she convinced the Nordic leaders that there was power in their united strengths. Having ruled peacefully as the Regent for the more than twenty years before her adopted son came of age in 1401, the allied countries are thriving economically. 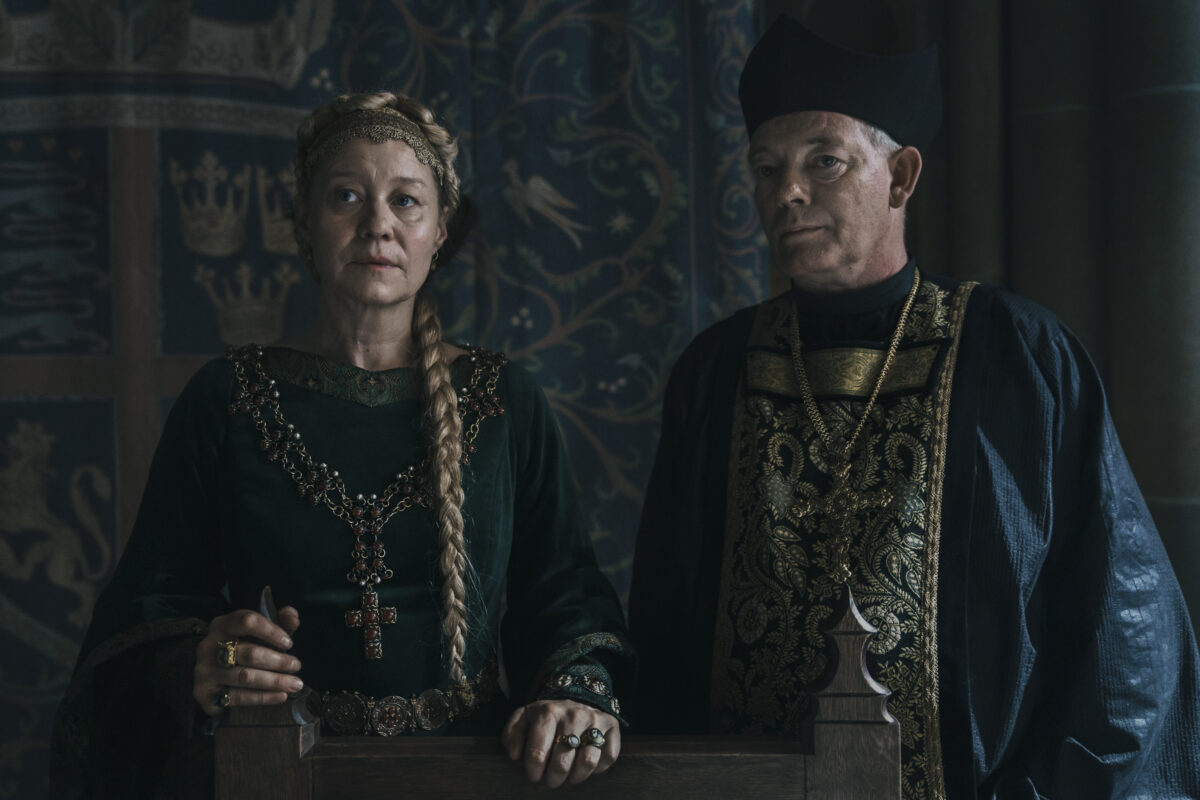 Trine Dyrholm as Margrete and Søren Malling as the priest in “Margrete: Queen of the North.” Photo courtesy of Samuel Goldwyn Films.

As Seiling’s story opens in the year 1403, trouble is on the horizon. Margrete has called the Kalmar Union leaders together. The Germans are starting to amass troops along their borders and the alliance must now be more forward thinking. They must form a cooperative army to combat the danger. There is much dissention. Margrete’s adopted son Erik is of age and the titular King of all three countries, but it is Margrete still in command. Erik is easily influenced by others and is still too weak to hold the alliance together.

Reluctantly, the leaders pledge soldiers for the army but none feel that they will get value from this arrangement. The plotting begins when Margrete proposes an alliance with the English to make them invulnerable. A representative of England arrives with the very young daughter of Henry IV and the negotiations begin. Erik, certainly in favor of a wedding when the child is of age, is being seduced by Margrete’s rivals. They point out that he has no real power and should be doing his own negotiations. Luckily Margrete is able to intervene before Erik gives away the right of inheritance to the English throne.

Raising the stakes further is the sudden arrival from Germany of a young man who claims to be her first son, Olaf, who allegedly died many years before. The court is thrown into upheaval, Erik is further undermined, and the diplomat who brought Olaf into the country has disappeared, leaving him under the protection of the Norwegian leader who believes Olaf is the rightful heir. Soon the rifts between the nations widen as some proclaim loyalty to Olaf and others to Erik. Skullduggery is afoot and the Germans are suspected of being behind this plot. 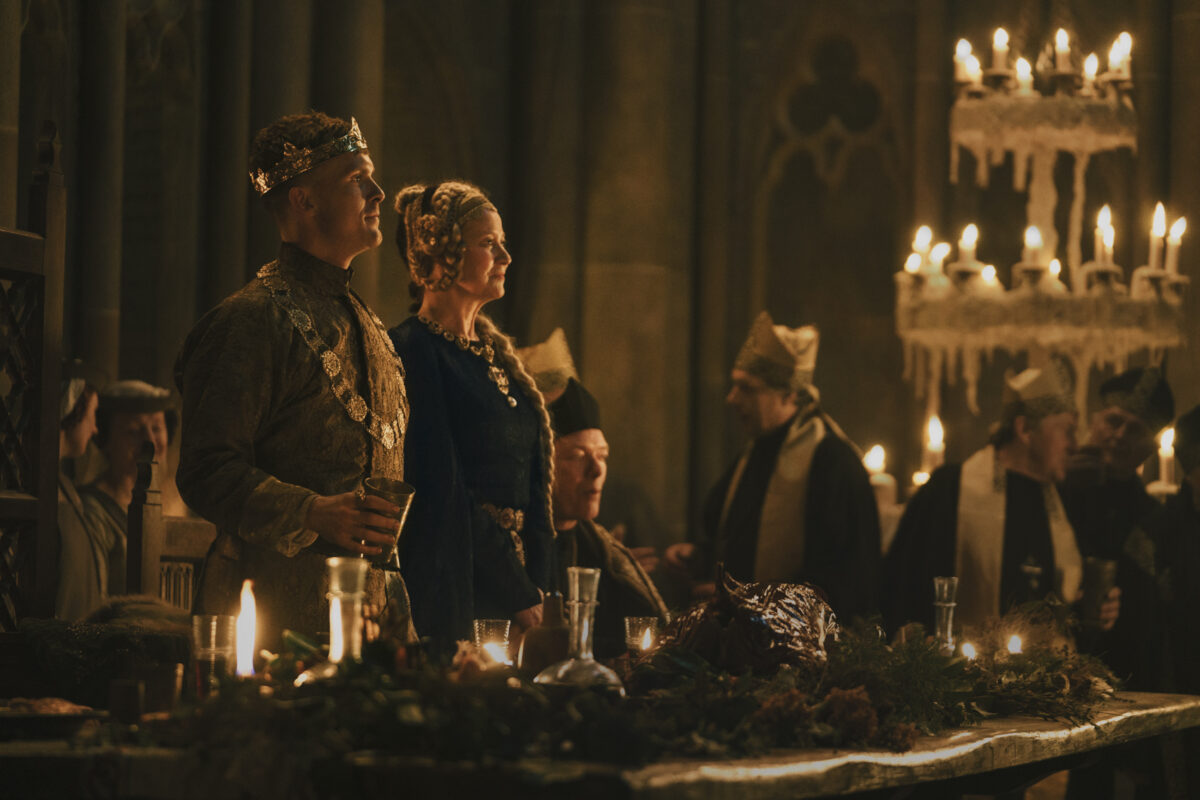 The film moves a bit slowly; history always does. The depth of character presented, especially the relationships between Margrete, her son Erik, the other power brokers, and her religious advisor and priest who holds far more influence than any of the others, all combine to give a picture of court life that is as complex as its internecine relationships. The writers, unfortunately, leave a major story point dangling at the end in terms of the impending war with Germany as though it was an insignificant detail.

The cast is terrific and, though not familiar to most Americans, they have important credits in the Scandinavian film industry. Dane Trine Dyrholm (“Celebration” and “In a Better World”) stars as Queen Margrete, with furrowed brow and intelligent eyes. Her stiff body language tells you everything you need to know about a woman who wields power carefully in a patriarchal political hierarchy.

Søren Malling (“The Investigation” and “Borgen”) is Peder, the priest, whose outsized influence is played subtly making it all the more powerful. Morten Hee Andersen, most recently seen in the Danish television series called “Deliver Us” fulfils the enormous promise he showed there. As Erik he is both in thrall to his adopted mother and resentful of her power, eager to exert his own. He plays his immaturity quietly until it manifests itself in devastating ways. The power brokers, Asle from Norway (Bjørn Floberg), and Sparre from Sweden (Magnus Krepper) successfully keep you guessing as to their allegiance and motives.

There is just enough truth in this fiction to keep you watching. Set in the fifteenth century, the production design and costumes are sumptuous and to a certain extent problematic. This period of history was filled with mud, lack of hygiene, and above all the plague. Everything here is just a bit too pretty. But then, perhaps Sieling decided that reality would be a bridge too far in a historical drama such as this. The writers have hewed remarkably closely to the history of Margrete who remained the de facto sovereign until her death in 1412, more than ten years after Erik came of age, while filling in their own imaginative details about the arrival of a potential usurper. Nevertheless, I warrant you will be entertained by this story that has just enough truth in it to satisfy all but the most academic.

Opening Friday December 17 at the Laemmle Royal, the Laemmle Virtual Cinema, and On Demand.