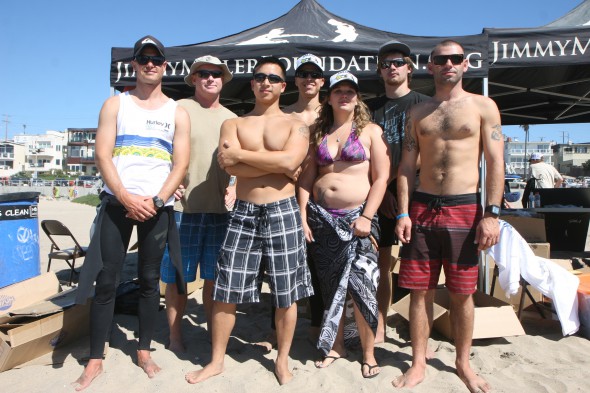 The weather was balmy, the surf head high and 175 surfers helped raise over $20,000 at the Sixth Annual Jimmy Miller Surf Fiesta on Sunday at 42nd Street in El Porto.

Among the participants were eight US Marines from Camp Pendleton’s Wounded Warrior Battalion, whom the Jimmy Miller Foundation taught to surf through its ocean therapy program. The foundation was established in memory of Jimmy Miller, a former lifeguard and surf school owner.

The 31 teams were each assigned five surfers, ranked from expert to beginner. Among the expert surfers were former pro Chris Frohoff and topped ranked college surfer Dayton Silva. The beginners included the Marines and MTV “The Hills” star Justin Brescia.

Competitors are not allowed to surf their own boards. Fortunately, Steve Meidroth of JS surfboards showed up with 30 demo boards for the surfers to choose from. But another distinguishing quality of the contest is that the top ranked surfers are assigned boards from the Miller Foundation’s collection of unrideable boards. These include the infamous Green Pickle, which resembles a garage-built kneeboard with rope handles. New to the unrideable collection this year was a Tom Wegener-shaped, 6-foot-2, 16 inches wide, finless Alaia Tuna. But the board proved only to look unrideable. After Matt Singley pulled off multiple 360s on head high waves riding the finless board in the third heat, the top ranked surfers were asking for it.

At the awards dinner at Sangria, the results showed the closest finish in the contest’s history. The team of Ian O’ Keefe, John Ward, Ethan Ward, Jeff Miller, Jake Johnston and substitute David Schafer rang up 60 points to the 59.5 points scored by the team of Chris Frohoff, Andy Dellenbach, David Ginsberg, Alison Pickering and Justin Brescia.