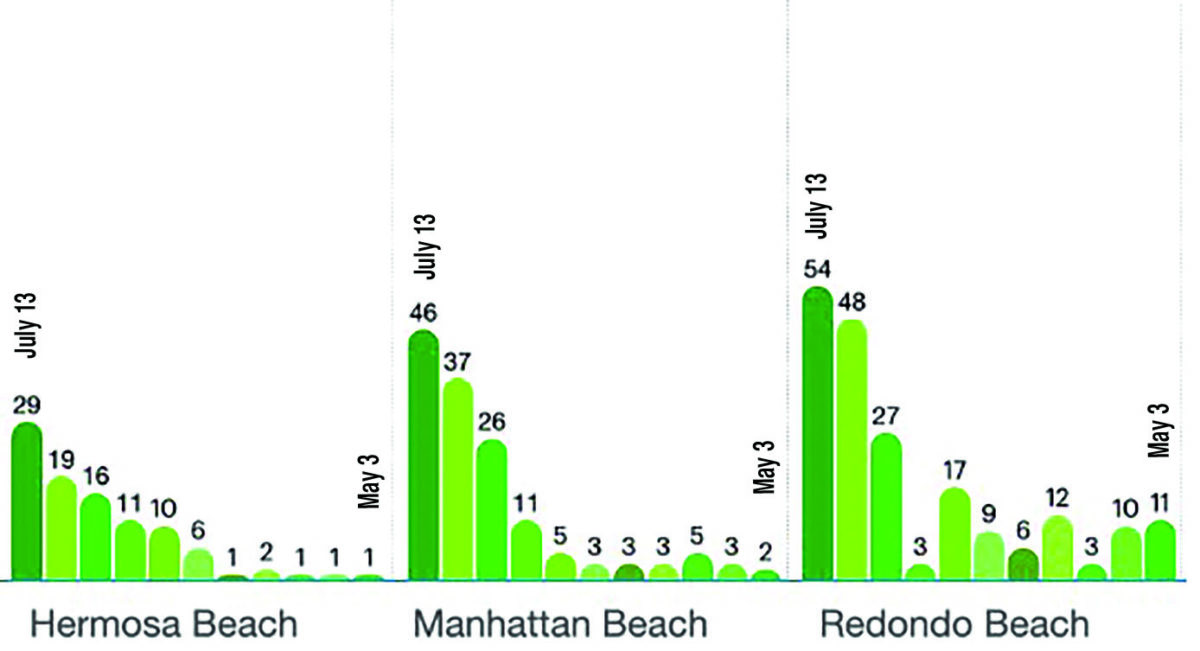 Fines of $100 for not wearing masks in public while not social distancing were approved by a 4 to 1 vote of the Manhattan Beach City Council at the council’s Tuesday night meeting.

The vote followed City Manager Bruce Moe’s report that confirmed COVID-19 cases more than doubled over the last 30 days, from 89 on June 15 to 208 on the day of the council meeting.

“All the signage and public shaming is not moving the needle. So we’re down to enforcement,” Councilman Steve Napolitano said in arguing for the fines.

Councilwoman Suzanne Hadley cast the dissenting vote because she thought $100 was excessive.

“I’ll vote with the majority on enforcement. But I think a $53 fine [the amount of most parking tickets] is enough of a sting for people who may have just lost their jobs,” Hadley said.

The majority settled on the $100 fine because that is the amount specified in the city code for citations, such as smoking in public.

Hadley also questioned how enforcement officers will determine what is a violation of the state-drafted mask law, which she described as a “Rube Goldberg mashup.”

Moe acknowledged the law is ambiguous because it only requires wearing masks in public when physical distancing of six-feet or more is not maintained.

Also problematic is the question of who will issue the citations.

At the urging of Mayor Richard Montgomery, the council directed Moe to begin issuance of the citations this weekend. But the council consensus was that the police should not be the enforcers.

Moe said it will take two to three weeks to retain outside contractors with the legal qualifications to issue citations.

Contact tracing of Manhattan Beach residents exposed to COVID-19 is being conducted by the Los Angeles County Department of Health, Mayor Montgomery disclosed at the Tuesday council meeting. But because of the federal HIPAA (privacy law), the County will not disclose the source of the exposure or who is being contacted, he said.

“It would be helpful if the County told us where the flare up was that caused the contact tracing. Was it The Strand, the beach, a private party? It’s important to know so we know where to focus our prevention efforts,” Napolitano said.

Councilwoman Hildy Stern said she would also like details on the four Manhattan Beach deaths the County has attributed to COVID-19.

Montgomery said he will press County health officials for details about the contact tracing and the four deaths in his weekly meeting with them this Friday, but said his previous efforts to obtain details about COVID-19-related issues have been unsuccessful. ER