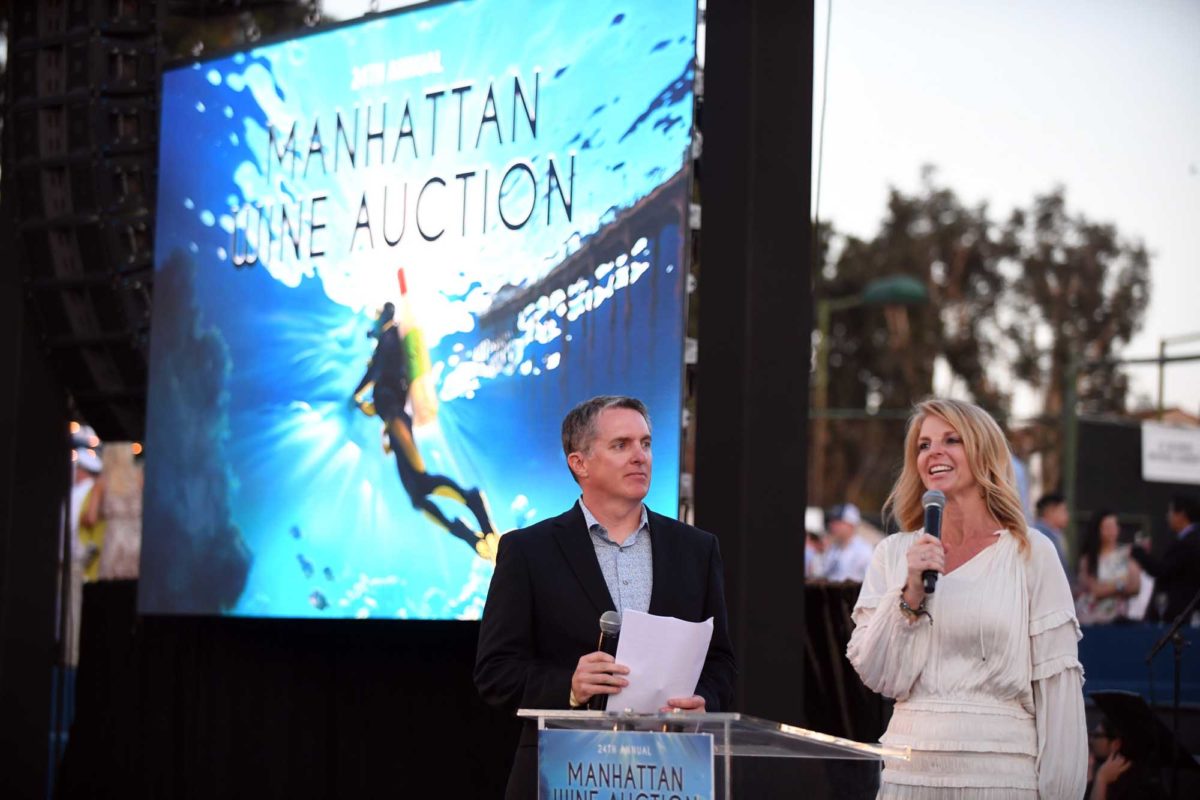 For 180 days of each year, alarm clocks go off early, and a small army of educators, administrators, and support staff rise, some with prep work to do almost immediately out of bed, everyone going through their commute routines before they arrive at the eight campuses of the Manhattan Beach Unified School District. They are met by an equally hard-working cadre of parents, dropping students off at school, or otherwise up early to help their kids prepare for the day. Both groups are united in their high hopes for the kids each one of them serve.

On one Saturday night in June for the past 25 years, many members of this same MBUSD community go out together, and they go big. The Manhattan Wine Auction features most of the area’s best restaurants and breweries and some of the world’s very finest wines, including extremely rare so-called “cult wines” in an exclusive reserve room. More than 2,000 people attend, including several of the region’s political and business leaders and at least one locally-living movie star (think “The Wedding Crashers”).

But where the event really goes big is in what it does for MBUSD schools. Since the first Wine Auction in 1995, the event has raised over $14 million for local schools, including  $1.3 million last year.

“It is the whole village,” Mahan said. “We feel so fortunate for the past 25 years our community has embraced it, not only in the sense of participating, but supporting the Wine Auction with volunteer hours, with donations, and with just love for this kind of spectacular scene of the ‘Who’s Who’ in Manhattan Beach. We are all here for the kids in Manhattan Beach, we are all here to strengthen our schools. To see how over the past 25 years it’s grown to what it now makes you think about what it’s going to be 25 years from now.”

MBUSD would hardly be recognizable, in terms of the programs available to kids, were it not for MBEF. Since its founding in 1983, the foundation has contributed $70 million to the school district. Over that same time period, the state of California has gone from being one of the highest funded public education systems in the nation, on a per-pupil basis, to among the lowest (41st, according to the California Budget and Policy Center). MBEF has helped bridge that gap, providing funding that has staved off teacher layoffs, provided districtwide counseling services, and supported programs ranging from STEM to music and arts education and everything in between.

MBEF focuses its funding each year on priorities identified by both parent surveys and its 32-person board of directors. Over a quarter of the $6.2 million MBEF gave to schools last year, for example, focused on class-size-reduction, which was a huge priority identified among teachers and parents.

“The $70 million we’ve donated to the school district since 1983 is all directed funding,” Mahan said. “This has been a long, sustainable, and very deliberate use of our funds to build up the core curriculum and enrichment programs we have in our schools at the district.”

This year, MBEF hopes to enable smaller class sizes at targeted English and math classes at both Manhattan Beach Middle School and Mira Costa High School and the hiring of a social worker who will be a “force multiplier” of sorts, overseeing a team of social worker interns focused on helping students with their social and emotional needs. The Wine Auction’s fundraiser-within-a-fundraiser, the “Paddle Raise,” will raise funds that will be directed at math education districtwide, something that parents and district leadership have identified as something deserving of a boost, similar to how MBEF for the last seven years has achieved measurable success in boosting science aptitude among students at all district schools through such innovative programs as MakerSpace.

“We are excited to focus on strengthening math, and are hoping that everyone sees this as an opportunity to support our math programs the way we have other programs in the past,” Mahan said.

MBEF has grown adept at efficiently using its funds for targeted needs. For example, after identifying a need for improved writing skills among students, a “special teacher on assignment” program flowered into writing workshops that engaged students with new and more creative ways to teach writing and general literacy skills; those skills have likewise measurably improved districtwide, as evidenced in testing scores.

“We are looking for ways to reach kids that brings excitement to the subject,” Mahan said. “Math is everywhere so we are focused on building the confidence of our students so they will be ready for the 21st Century and have mastered the tools they will need to excel in whatever field they might be interested in going into. It’s a subject we have to support as a nation right now, because our global economy depends on it. we are lagging behind in math, generally.”