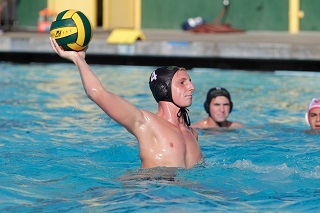 Troy Gleason and the sixth-seeded Mira Costa Mustangs begin their playoff run with a home game against Ventura on Thiusday. Photo

Ranked No. 6 in CIF-Southern Section Division 2, Mira Costa (20-7) will host Channel League co-champion Ventura (16-4) in the first round of the playoffs Thursday at 5 p.m.

The victor will play the winner between No. 3 Agoura and Hoover in the quarterfinals on Saturday.

“The playoffs will be fun, but winning Bay League is just a step on our way into CIF,” Reichardt said. “We are taking it one game at time. There is no championship on our minds right now. Ventura will be tough as will all the CIF games in Division 1 and 2. Ventura is a good team so we need to be focused.”

Bay League runner-up Palos Verdes (20-9) is ranked No. 10 in Division 2 and opens the postseason on the road playing Citrus Belt champion and fifth-ranked Redlands East Valley (24-4) on Thursday.

Peninsula (19-9) and Redondo (18-11) are ranked No. 1 and No. 2, respectively, in Division 4 and Sea Hawks would like nothing better than to have an opportunity to avenge their close 9-8 and 7-5 league losses to the Panthers by defeating then in the finals,

Peninsula hosts Long Beach Poly (8-18) in the first round, Tuesday, Oct. 31 at 5 p.m with the winner advancing to play the Schurr-Sunny Hills winner in the second round on Thursday. 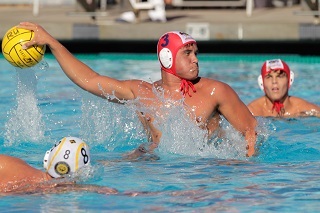 Alex Wrightsman and the second-seeded Redondo Sea Hawks keep their eyes on the goal of defeating top-ranked Peninsula in the finals of the CIF-SS Division 4 boys water polo championships. Photo

Despite being seeded second, Redondo (18-11) will begin its playoff run on the road against San Dimas (18-11). The winner will play the Cerritos-JSerra winner on Thursday.

“I believe our team has the most talent in the division,” Redondo head coach Chris Murin said. “If the team decides to play as a unit and not as individuals it has the best chance to win the title. We are not disappointed about playing on the road  I would rather start on the road and be at home for second-round game. The boys have yet to play their best and we hope that starts in the playoffs.”

Brackets and results are available at cifss.org.