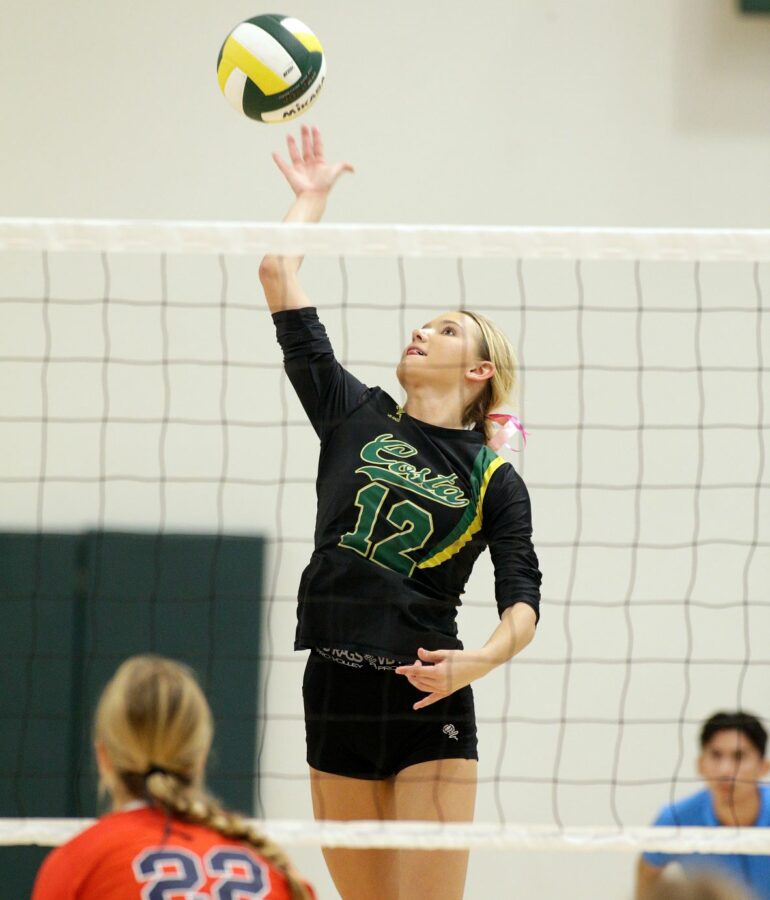 That’s the tantalizing reality for Coach Cam Green and his Mira Costa girls volleyball team after they defeated Palos Verdes in straight sets Tuesday night. Their goal all season has been to help Green win his first CIF title as a head coach, and now are just one win away from having that opportunity.

There are two pools of three teams each in Division 1. The winner of each pool will play the winner of the other pool for the CIF title.

Although the Mustangs are top-seeded in Division 1, and Pool A, they were still expecting a tough battle from Palos Verdes. After all, PV finished second to the undefeated Mustangs in the Bay League, and even took them to five sets in one of the two matches Costa won during the regular season.

But Green and his girls had nearly a week to prepare for this match, and he said the Mustangs executed their game plan brilliantly.

“We studied their defensive rotations and the girls did everything we asked them to do,” Green said moments after the match ended 3-0, with set scores of 25-15, 25-21 and 25-17. “If we can keep playing like this against Mater Dei I feel good about our chances to advance.”

All season long, the Mustangs have relied on their two superstars – junior setter Charlie (Chunk) Fuerbringer and senior opposite hitter Tanon (Aquaphor) Rosenthal – to carry them to an incredible 36-3 record. But on this night, at least, they had a third star who shone just as brightly: outside hitter Drew (Lizzo) Wright.

With Fuerbringer setting her up time after time with perfectly placed sets, Wright piled up an amazing 24 kills. She repeatedly rose above the net and hammered home unhittable balls that resulted in a clean winner, or a shank into the bleachers or the back wall. She had a kill percentage of .432, well above even her usual stellar percentage.

“Drew was amazing tonight,” Green said. “This was one of the best games I’ve ever seen her play. She carried the load for us tonight.”

The Mustangs, helped by a raucous home crowd – they get to play all three of their pool games at home as a reward for their top seeding – were able to prevail over the Sea Kings despite the absence of two key players.

Both junior blocker Bryn (Menace) Shankle and junior outside hitter Chloe (Donuts) Hynes were present, but sidelined with walking boots after spraining their ankles last week in the Mustangs first pool match against Lakewood.

“Bryn maybe will be back by then, but it’s only a slight chance,” he said. “We just have to let Bryn and Chloe heal and wait till they’re ready to get back in the lineup.”

The Mustangs were on cruise control most of the night against the Sea Kings, but there did come a point in the second set when PV pulled within 18-17, forcing Green to call a rare timeout and rally his troops.

Wright rose up for a cross-court kill, and Rosenthal hammered one down the line that was unreturnable to make it 20-17 Costa. PV hung tough to stay close at 21-19, but two more Wright kills brought them to set point at 24-21. After a great rally featuring several amazing digs, Fuerbringer set up Rosenthal for a down-the-middle kill that captured the set 25-21.

After that, Costa went back into cruise control and won the last set 21-17.

Although Wright was clearly the star of the night, it was a total team effort. Rosenthal racked up 12 kills, libero Taylor (Baby Gorgeous) Deckert recorded an impressive 13 digs, and Erin (Effortless) Inskeep continued to fill in nicely for Shankle and Hynes by contributing 9 kills at just the right time.

“I’m so proud of these girls,” Green said. “They knew what they wanted and they went right after it.”

And they know what they want Saturday night too: a win over Mater Dei and a ticket to the CIF Finals. ER