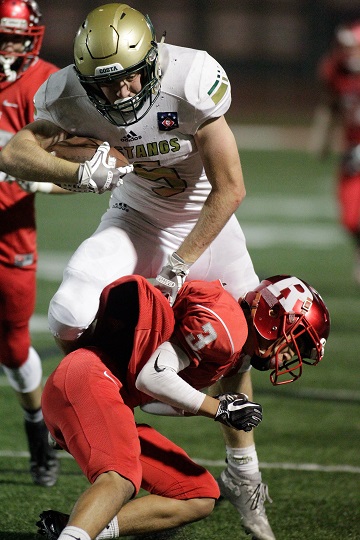 After Palos Verdes completed an undefeated Bay League season with a win against Peninsula, Mira Costa and Redondo squared off with playoff implications on the line.

Mira Costa (6-4, 4-2) shut out host Redondo 21-0 to claim second place in the league. The Mustangs were led by running back Koda Thormodsgaard who ran for 80 yards and one touchdown but it was Mira Costa’s defense that made the difference, recording five interceptions in the game with four coming in the first half.

Quarterback Nick Carpino was 12 of 25 passing for 140 yards and a touchdown and backup signal caller Reed Vabrey ran for a 3-yard touchdown.

Redondo will travel to face top-seeded Corona del Mar in the first round of the Division 4 playoffs on Friday at 7 p.m.