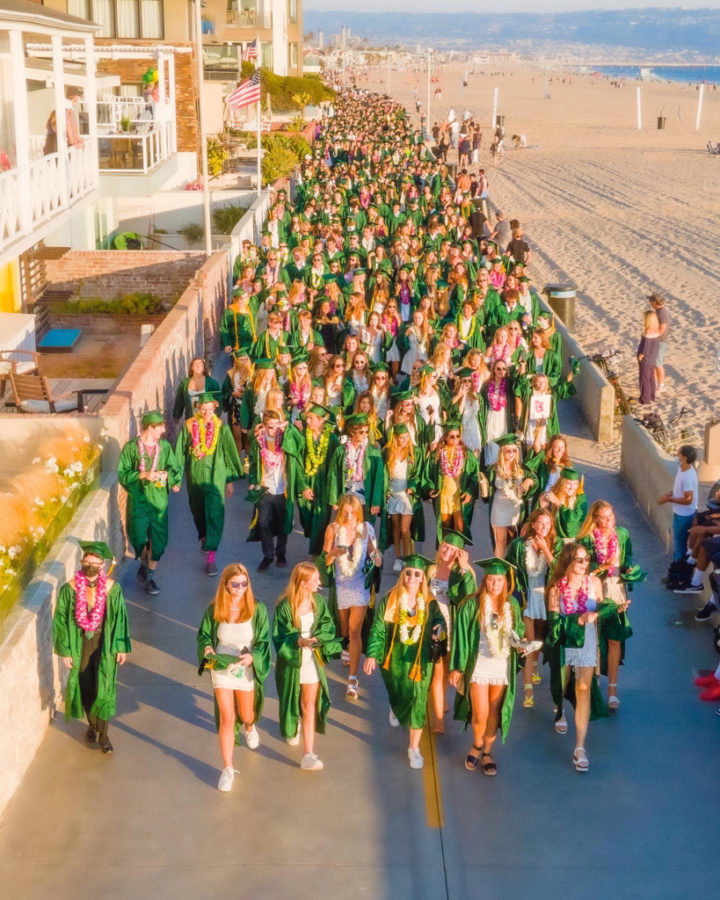 Mira Costa Class of 2020 celebrates graduation with a walk from the Hermosa Beach Pier to the Manhattan Beach Pier. Photo by Richard Podgurski 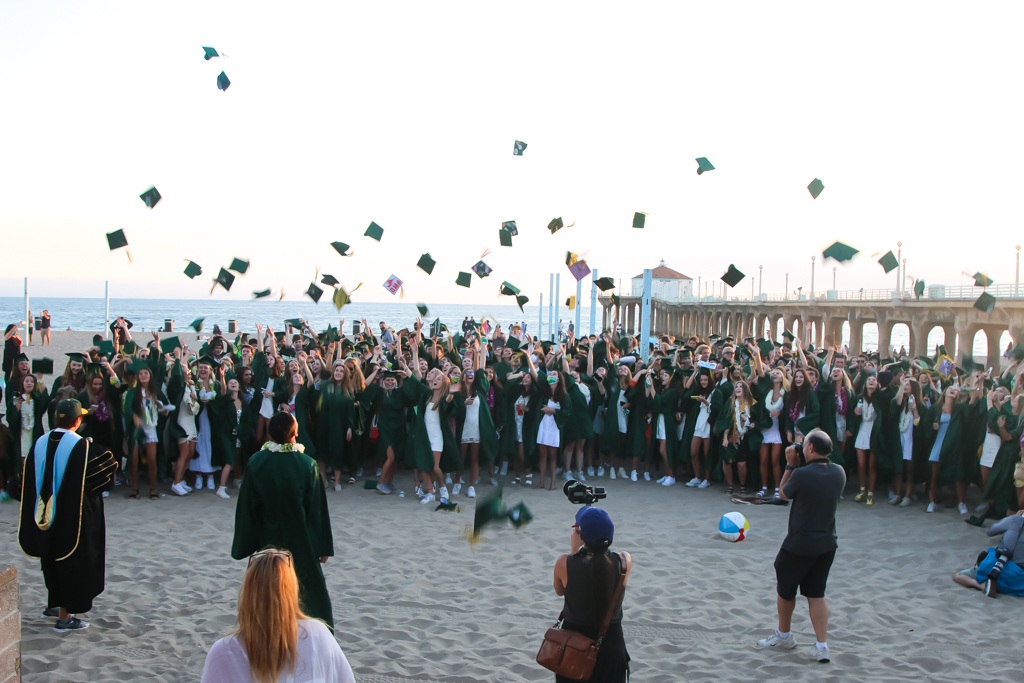 Then the pandemic forced Mira Costa to close its campus on March 16. Immediately, the principal understood a traditional commencement ceremony for the 687 seniors and their families inside Waller Stadium would not be possible.

“That’s when Principal Dale told us the focus had changed. ‘This year’s graduation,’ he said, would be for the kids,’” Erin Condren recalled. Condren was a member of the parents graduation committee. Her daughter Kate was student body president. Her son Finn, Kate’s twin, was senior class president.

Unforeseen by Dale was the degree to which the Class of 2020 would take his message to heart.

“The one thing the students made clear when we surveyed them, was they wanted to be together for graduation. Even if that meant postponing the graduation,” Erin Condren said. “We even talked about putting hula hoops on the beach for each student, so if the authorities said it was an illegal gathering, they could start hula hooping and say it was an exercise class.”

“In March, we were told to stay home for two weeks. Then, we never went back,” Kate Condren said. “There was no sense of closure. I was on the student committee with Principal Dale and I could see we weren’t going to bring the 687 students together for graduation,” she said.

Mira Costa Clas of 2020 celebrates graduation with a walk from the Hermosa Beach Pier to the Manhattan Beach Pier. Photo by Richard Podgurski

The three committees settled on a plan modeled after what Mater Dei did in Orange County. They would present students their diplomas in the football stadium in groups of 50.

Last Monday, June 8,  just three days before graduation, the Health Department replied with a no to the small groups plan.

Despite the setback, the committees remained determined, Dale said, “to recognize each graduate in a way that was respectful and memorable.”

They decided to have the graduates and their families park their cars on Peck Avenue, at the emergency road entrance to Waller Stadium, where the homecoming kings and queens drive on to the running track. Car windows were to be rolled up and everyone in the car was to wear masks. Convertibles and open electric cars were prohibited. 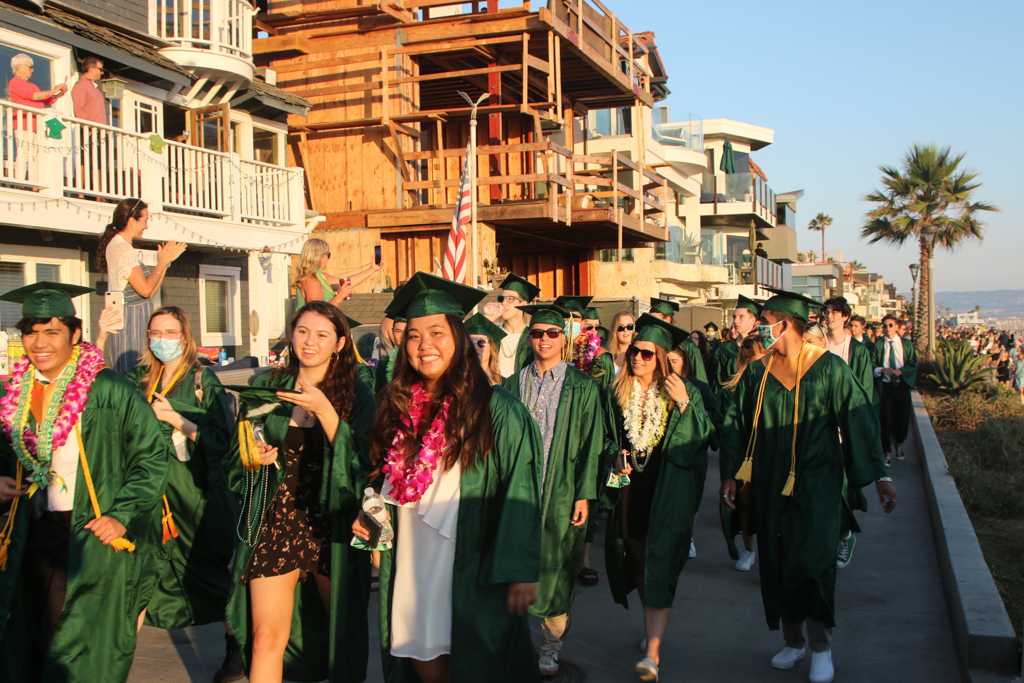 Last Thursday, the morning of graduation, families whose names began with E arrived at 10 a.m. at the Waller Stadium entrance. Every 15 minutes thereafter, families whose names began with the next letter on the program pulled up to the entrance. (The alphabetical order of names was random). To compliment their green gowns, students were given masks tie dyed yellow and green, and stenciled “MC Class of 2020.”

“Pomp and Circumstance” played over the loudspeakers as each graduate’s name was announced. They walked alone up a green carpet to a stage where Principal Dale presented them their diplomas. Parents were allowed to roll down their car windows to take photos, but not to leave their cars.

As is always the case on graduation day, last Thursday was hot and the ceremony long. Not a few hours long, but seven and a half hours long. It ended at 5:30 p.m., five minutes ahead of schedule, Dale noted.

“We wanted it to feel respectful, and not rushed,” Dale said.

He presented 90 diplomas an hour and took  just one 10 minute break.

Despite the ceremony’s tedious logistics, an emotional intensity ran through it.

“The ‘aha’ moment for me came when I saw this as an opportunity to talk personally to each of the 687 students, something I was not able to do in my previous 10 years of handing out diplomas. The conversations were just a few seconds, but long enough to make a personal connection. It was physically taxing. I might not want to do it this way every year. But for this year it was very rewarding,” Dell said.

The feedback the principal received afterwards was more positive than he had anticipated, except from the one group he wanted most to please. 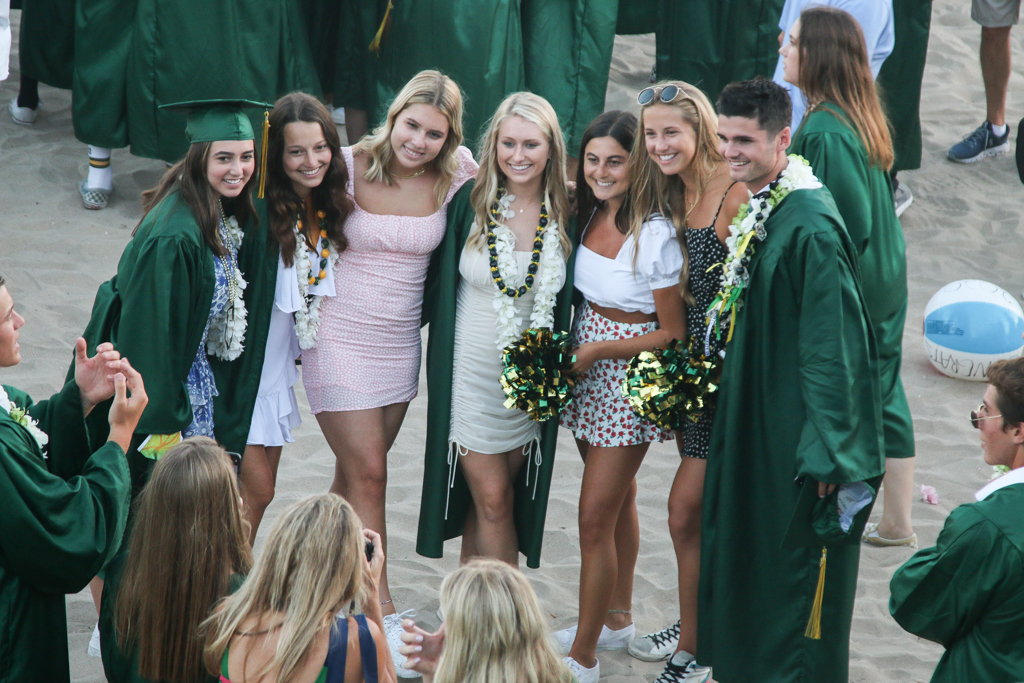 The county’s letter denying permission to distribute diplomas in small groups arrived one week after the Black Lives Matters march along The Strand, from the Manhattan Beach pier to the Hermosa Beach pier. Though billed as a protest, the atmosphere was celebratory. The day was warm and many of the young protesters were Mira Costa students, reuniting for the first time since school closed and the shelter at home order was issued. Student body president Condren was among them.

Manhattan Beach and Hermosa Beach have a long tradition of celebratory marches between the piers. The annual Richstone Family Pier to Pier walk, founded 33 years ago, raises hundreds of thousands of dollars each year for the family counseling center. The Skechers Pier to Pier Friendship Walk, founded 12 years ago, raises millions of dollars each year for education. Both draw thousands of walkers.

The day the graduation committees received word the county had squelched their small group plan, student body president Condren texted classmates on GroupMe, the app used during the school year to inform students about dances and games.

The county could ban students from gathering but not from marching.

“We hugged. We cried. I cried,” Kate Condren said. After hugs and selfies, the students set out north along The Strand for the Manhattan pier. Though the GroupMe text said masks would be required, few of the students wore them, or practiced social distancing. 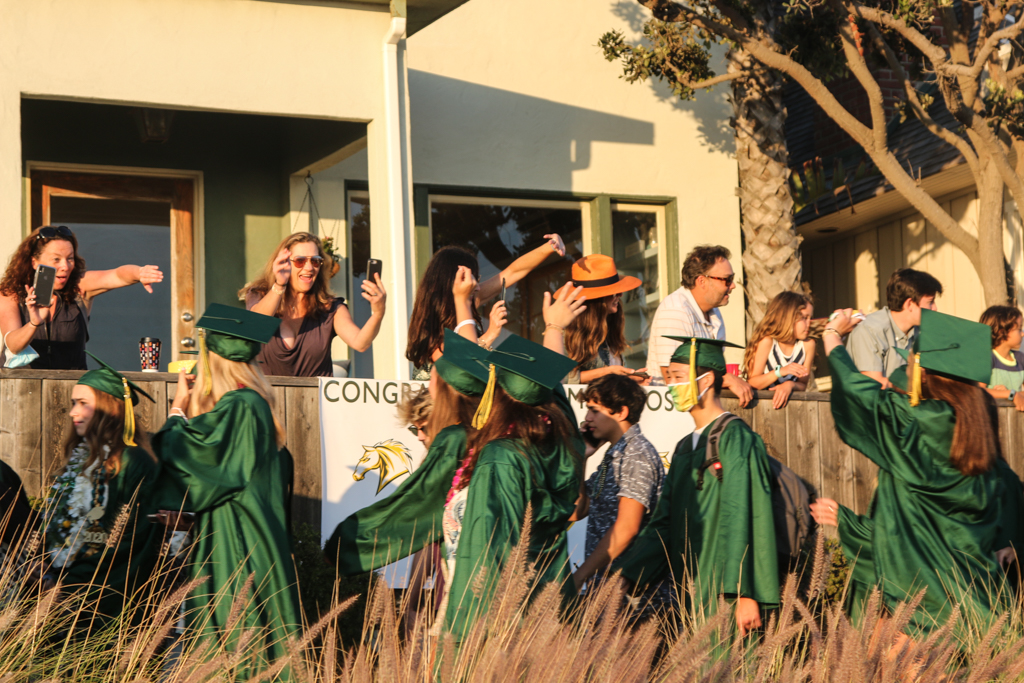 Parents cheer on the Mira Costa Class of 2020. Photo

Parents cheered from Strand balconies strung with congratulatory banners. The 1.6 mile walk took just 38 minutes. After regrouping at the Manhattan Beach pier for more joyful tears, hugs and selfies the students skipped down the stairs to the sand where beach volleyball was born and where, for the first time since before the students were born, no volleyball nets hung between the blue posts. The county banned volleyball because of the pandemic.

Vice Principal Deborah Hofreiter, the class of 2020’s academic advisor throughout their four years, called for the graduates’ attention over a wireless mic. She wore a blue doctorate of education stole over her black professor’s gown. Instead of a mortarboard she sported a green and gold MCHS baseball cap.

“We are the luckiest and unluckiest of classes,” the former English teacher said, paraphrasing from Dickens’ “A Tale of Two Cities.” 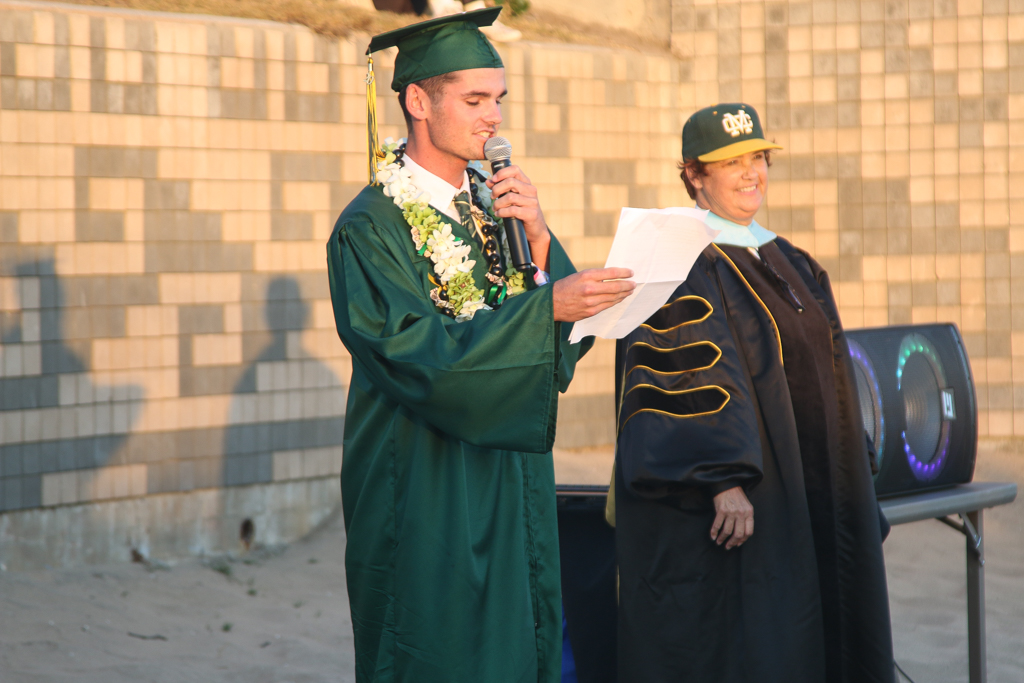 Then she introduced class president Finn Condren. He read his address without looking up from his notes. It was fewer than 500 words and also played off “A Tale of Two Cities.”

“We were all born around the events of 9/11. We graduated from kindergarten during the Great Recession of 2008. And 12 years later, here we are, graduating from high school in the midst of a global pandemic and a powerful movement to once and for all, end racism.

“It’s no wonder Oprah Winfrey said, ‘We are the chosen class…”

“We are not a class to be taken lightly,” he continued.  “We are resilient and powerful and passionate about so much…. That’s why it was so hard to get that email in early March telling us we could not come back to school…. Sure, we all feel a bit robbed of our senior year, but there are a few things that no one can take away: Memories. Friendships. Hope. And…. the ability to find joy and gratitude — even on the darkest days.”

The class president ended his address with Leslie Dwight’s pandemic anthem“2020 is canceled.” “What if 2020 is the year we’ve been waiting for?…/A year we finally accept the need for change…./A year we finally band together, instead of pushing each other apart…/2020 isn’t cancelled, but rather/The most important year of them all.”

Hofreiter took back the mic, turned to the parents looking down from the  pier  and announced, “I present to you the class of 2020.” Then, turning back to the students, she told them,“You may move your tassels from the right side to the left side.”

Hofreiter doffed her baseball cap and shouts and mortarboards flew through the air like a scattering of screeching seagulls.

Finally, it was the parents’ time, for family graduation photos, unlike any ever taken before. The sun was setting over the blue Roundhouse Aquarium at the end of the pier. But perhaps not unlike photos that will be taken in the future.

The near unanimous sentiment of the graduates and their parents was that the Class of 2020 had forged in the smithy of the pandemic a new Mira Costa tradition.

Dale did not attend the beach ceremony and afterwards declined to comment on it, except to note it was a “post graduation event.” 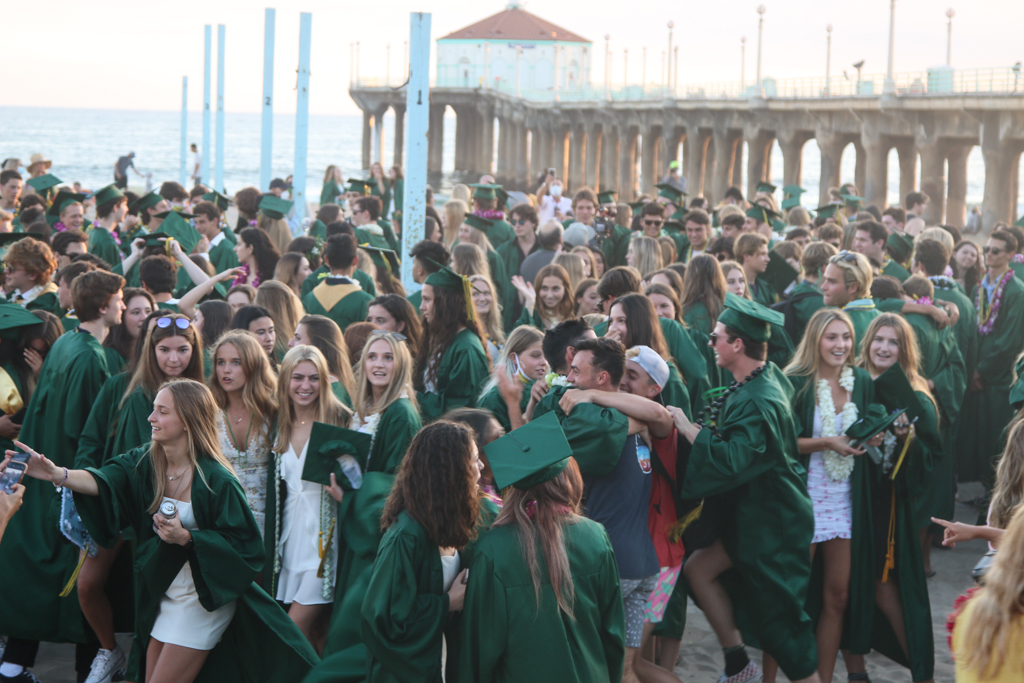 The absence of masks and failure to socially distance was criticized.

Mira Costa English and philosophy teacher Stacy Cabrera wrote on her Instagram account, “I feel like I failed as your teacher because clearly you learned nothing from me at all…You had a chance to use your platform as a student of this school for good in the community…. it was a wasted opportunity to do something good with it.”

Student body president Condren acknowledged the criticism was merited. But she expressed confidence the tradition established will outlive the pandemic that occasioned the criticism.

“We live at the beach,” the student body president said. ER