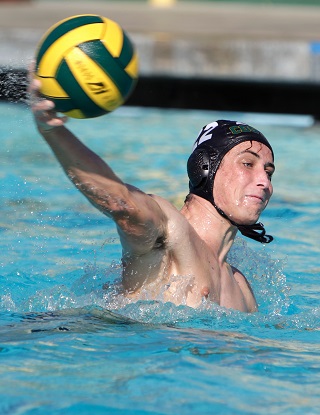 Ethan Chalk and the Mira Costa boys water polo team are aiming to win another title at the 48th annual Henry Stuart South Bay Water Polo Tournament this weekend. A championships would be the Mustang’s third championship in four years. Photo

Off to a fast 4-0 start in Bay League action, Mira Costa’s boys water polo team is preparing its run at a CIF title and could move up in the polls with a strong performance at this weekend’s 48th annual Henry Stuart South Bay Water Polo Tournament.

Mira Costa is ranked No. 16 in the combined CIF-Southern Section Division 1 and 2 poll but fell to No. 9 Foothill 10-3 last Friday.

Troy Gleason scored two goals and Colin Le added one in the loss.

Mira Costa recorded a big win Tuesday at Peninsula when Gleason scored with less than one minute remaining giving the Mustangs a 5-4 victory for their second win against the Panthers in Bay League competition.

Mira Costa will begin the South Bay Tournament with home games on Friday, playing Rancho Bernardo at 3 p.m. and Chadwick at 5 p.m.

Saturday game times and locations are yet to be determined.

Mira Costa was runner-up in last year’s tournament, losing to Hoover of Glendale 7-6 in sudden death after Hoover tied the game in the second overtime period.

The Mustangs will host Palos Verdes Tuesday, Oct. 10 at 3 p.m. in a key Bay League contest. Peninsula and Redondo are ranked No. 1 and No.2, respectively, in CIF-SS Division 4 but Redondo has dropped two consecutive games to Mira Costa and Palos Verdes.