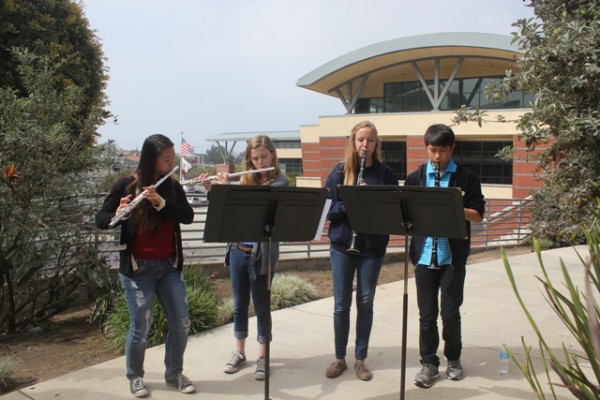 Carlson was one of 20,000 music department representatives nationwide to receive this notification. A few months later, he would be one of just 12 to receive a phone call that his school had actually won.

Earlier this month, the Grammy Foundation announced that Mira Costa’s music department was recognized as a 2014 Grammy Signature School. As a top three Gold recipient, Mira Costa will receive $5,000 to benefit the high school’s orchestra, band and choir programs.

“I have been applying for nine years and this is the first time since I started applying that we won,” Carlson said. “I was really happy since we got to be recognized nationally by the Grammy Foundation.”

The Grammy Signature Schools are determined each year by a preliminary application process that requests information about the school’s programs and participating students. In October, 123 semi-finalists were chosen from the original pool of applicants. These semi-finalists then submit one-and-a-half minute recordings featuring the school’s choir, orchestra and concert band. Carlson also entered Mira Costa in the Ensembles Category, where he submitted a CD of Mira Costa’s jazz band, wind ensemble and percussion ensemble.

Although the application process was extensive, Carlson kept it a secret from his students. Mira Costa senior Jigar Bhakta, president of the bands, was one of many who were completely unaware about the award until the announcement earlier this month.

“The Grammy Process was done secretly by Mr. Carlson since he wants us to earn it because we earn it and not because we chase awards,” Bhakta said. “It was definitely exciting though–to be recognized on that national level is at the least pretty awesome.”

As the next year approaches, Carlson and the other Mira Costa Music Department teachers Peter Park, Michael Hayden, and Mark McCormick hope to continue their prolific and varying performances.

“Most of all, I think it’s really about pursuing really amazing music on a daily basis,” Carlson said. “We don’t settle for just good enough, but we’re always pushing the envelope just to get better.”