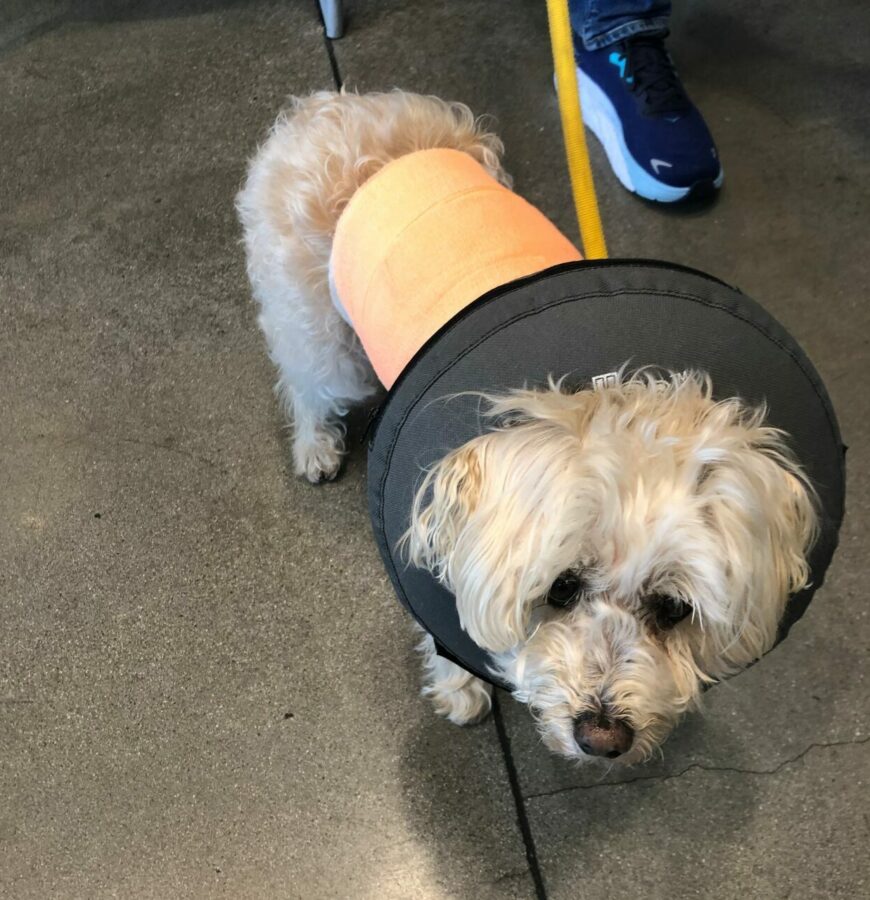 Molly came screaming in through her doggy door around midnight on a Thursday night in early November. Her owner, Linda Kirkpatrick, came to see what had happened. Molly was so distraught she bit Kirkpatrick, who’d reached down to pick her up. Then Kirkpatrick realized that Molly was a bloody mess.

“When I turned on the light, I saw she had three puncture holes on one side of her and two on the other,” Kirkpatrick said.

Kirkpatrick’s first thought was the attacker had been a bird. Molly, a schnauzer-poodle mix who weighs a scant 14 pounds, is smaller than a large bird. But when a veterinarian examined the wounds, they seemed too extensive to be the work of a bird.

“The vet said there’s no way a bird could do this to her because she was so damaged,” Kirkpatrick said. “She had broken ribs. She had a punctured lung. She had massive holes all over. They said she needed surgery. So she was in surgery all day, and they kept saying they thought it was a coyote because she had so many wounds.”

The Kirkpatricks live in the neighborhood at 10th and John, where coyotes have been spotted over the last year. Neighbor Vikki McMahon put the word out to the rest of the neighborhood via NextDoor, looking for footage of the possible attacker.

“Animal control and the vet have confirmed that it was a coyote,” she wrote. “If you live in the area please check video footage from that day/timeframe and send it to MB Animal Control.  If you have other recent footage of coyotes in the area please send that.  Molly had several broken ribs and spent over a week at the vet but she is going to be okay.”

A few dozen neighbors chimed in, with photos and other reports of nearby coyotes. The City has grappled with increasing coyote attacks over the last year. City Council in August considered hiring a trapper to euthanize suspect coyotes and intends to revisit the matter early next year.

But as animal control officer Kate Anderson conducted a forensic investigation of a sort, a new suspect emerged. She consulted with other animal control agencies and veterinarians, sending out photos of the wounds.  A Canadian veterinarian who apparently had expertise in bird attacks confirmed Kirkpatrick’s initial suspicion —  Molly had been attacked by an owl.

“It came back 100 percent conclusive that it was an owl, which was what I thought originally when I saw what looked like talon wounds,” Kirkpatrick said. “What we learned is that an owl can fly down between 10 and 20 miles an hour to just hit its prey to disable it, so that then it won’t fight when they pick it up. So that’s how Molly got such severe wounds. And the owl went to pick her up, and she was probably too heavy…. So he probably just dropped her or she somehow got away.”

McMahon posted an update letting the neighborhood know that the perpetrator had not been a coyote, after all.

“We are grateful and thank MB Animal Control for their efforts regarding this incident and I apologize for not having the correct information in my initial post,” McMahon wrote. “There are coyotes in this area, but this particular incident was not from a coyote.”

“She was in the hospital for about five days, very severely injured, but she’s fine now, especially over these last few days,”  Kirkpatrick said. “She still feels a little funny, but the stitches are out, and she’s begun to wag her tail and bark a little.”

Her owner is recovering a little more slowly. Kirkpatrick has discovered there are two morals to this tale. One is don’t leave your pets out at night unattended. The second is make sure if you get bitten by an animal, even a 14-pound “schnoodle,” make sure that wound is properly treated immediately. She’d been so concerned with Molly’s injuries she shrugged off her own and now may require a small skin graft on her finger.

“I learned something else,” she said. “If you have an open wound, particularly a dog bite, get to the ER immediately, within two hours, not eight hours later like me,” she said. “And the ER, not urgent care —  you might need intravenous antibiotics, which urgent care doesn’t do. Go to the ER.”

Meanwhile, Molly has been doing something that surprises Kirkpatrick.

“I didn’t think she’d ever go in the backyard again,” Kirkpatrick said. “But she does. The thing that Canada [veterinarian] told Kate is, ‘What are you doing letting pets out at night?’  And she was like, ‘We live by the beach in California,’ or that was implied. And he said ‘No pets out at night.’ And I haven’t really seen it, but a lot of people are telling me that we have a lot of owls.” ER