“Mr. Klein” – Nothing small about it [MOVIE REVIEW] 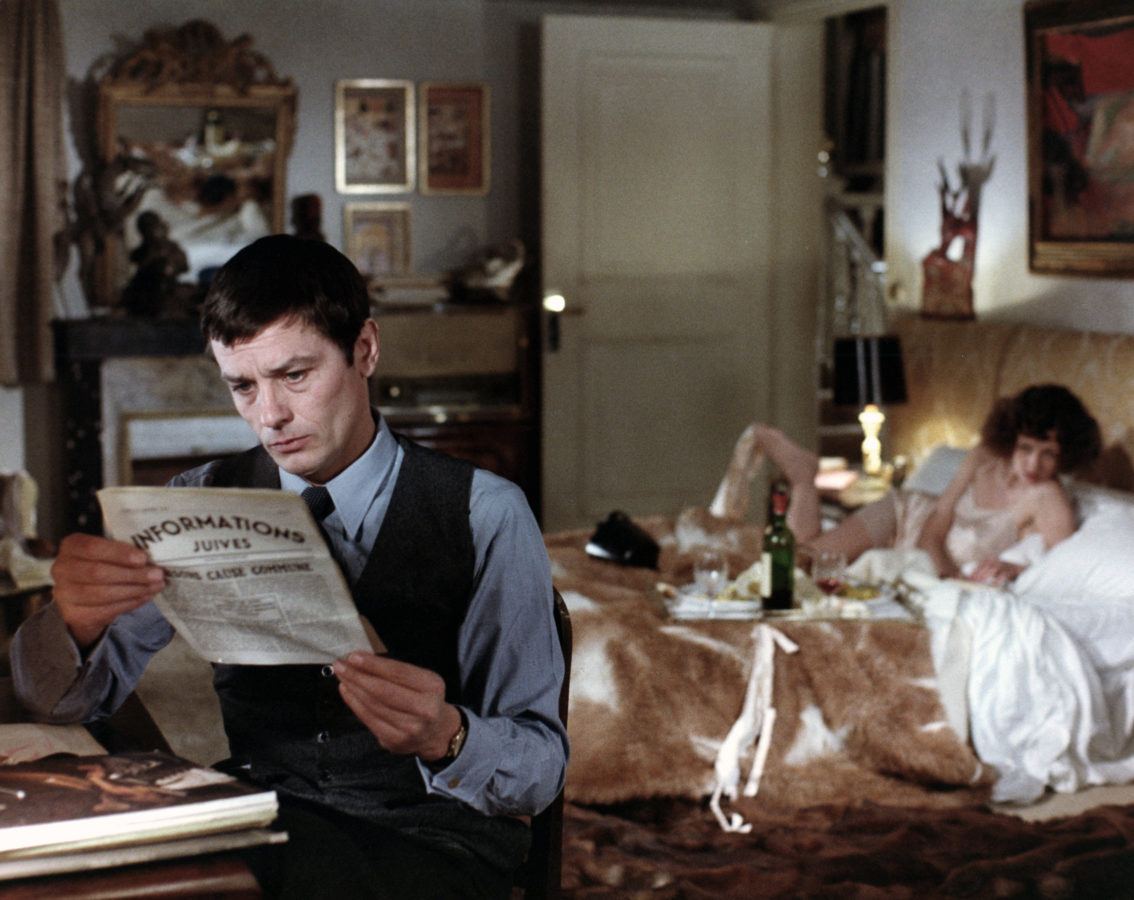 “Mr. Klein,” Joseph Losey’s brilliant, multi-layered film of 1976 has been given a well-deserved rerelease by Rialto Pictures, a company that Kenneth Turan justifiably called “the gold-standard of re-issue distributors.”

It is 1942, Paris, and the world is either “other” or “us.” Only such an exam or birth certificates proving Christian origin through a minimum of 3 generations will dispel rumors, suspicions, or anonymous reports by jealous or greedy neighbors. This is the story of an “us” who, gradually and to a certain extent of his own doing, becomes an “other.”

From a simplistic point of view, one could say that Losey, working from an extraordinary script by Italian Franco Solinas, gives us a morality, immorality, and amorality play. Hannah Arndt famously coined the expression “The Banality of Evil,” but her more telling quote was “The sad truth is that most evil is done by people who never make up their minds to be good or evil.” And never has it been more apropos than in telling the story of the haute bourgeoisie in Paris, 1942, culminating with one of the most infamous events in modern French history, the round up by French police of 11,000 Jews caged in the Paris Velodrome before their deportation to the camps.

Robert Klein lives in a beautiful apartment surrounded by all the trappings of wealth imaginable, including the paintings on the wall, but more revealingly, the paintings on the floor against those damask walls. Robert is, ostensibly, an art dealer and his collection has expanded exponentially. He, like most of the other “pure,” or perhaps a better word would be “unsullied,” is aware but untouched by the circumstances of the Jewish population. Untouched is perhaps a misnomer in that Robert knows full well how to take advantage of the “Jewish problem,” as we hear, before we see, in one of the opening scenes.

Heard from the perspective of Juliet, the young mistress he keeps sequestered in his bedroom, a negotiation is taking place in the downstairs office, eventually revealing that an older man has come to sell a Dutch painting of great value to Robert who is known as a buyer of discerning nature. Robert, aware that the seller is a Jew in desperate need of cash to finance an escape, takes full advantage of the situation and offers a pittance of what the painting is worth, and much less than he would have offered had the man not been a Jew. Not only does Robert casually humiliate the man with the price, but fully cognizant that at some point in the future the seller could claim some sort of coercion, he dictates a clause on the invoice for the man to write by his own hand that he has agreed on and is satisfied with the price. Robert has obviously dictated this clause many times before. For Robert, it’s a business coup that is enhanced because it’s at the expense of someone in reduced circumstances beyond his control.

The pleasure of his gain is soon to disappear, however, for on his threshold, someone has delivered a copy of Informations Juives, the newspaper sent to Parisian Jews to keep them up to date on the latest government rulings.

Robert is more than offended that such an error could have been made. He must straighten this out immediately and without thought of consequences. Consequences are only significant for Jews, not for rich gentiles such as himself. Robert begins a journey that he righteously feels will clear his name and we know can only lead to disaster. Somewhere in Paris, there is another Robert Klein, a Jew, who has expropriated his name and muddied his identity to throw the police off his scent. This, the police acknowledge, may be true but now they have another Robert Klein in their sights. 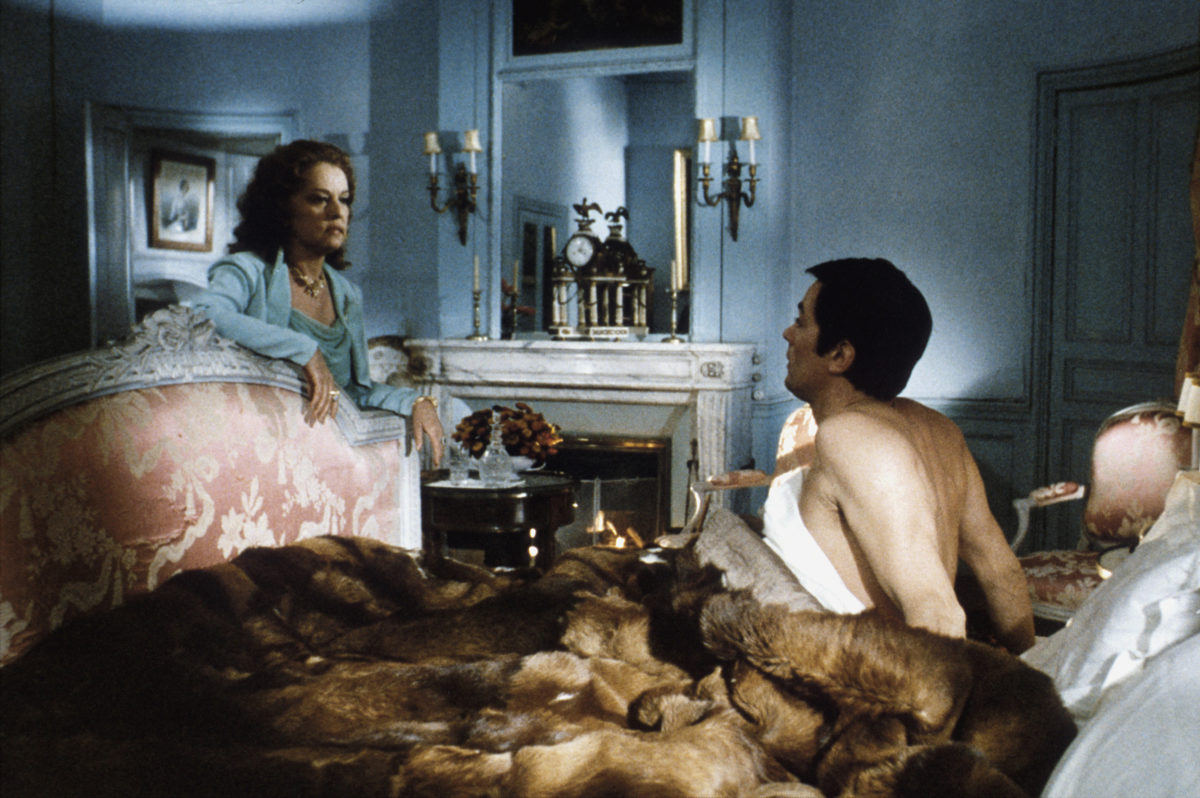 Robert begins to try to track the other Klein on his own, against the advice of his best friend and lawyer, Pierre. Digging deeper into Klein’s life, Robert discovers that much like himself, Klein travels in wealthy and artistic circles, seduces the wives of friends, and is a master of control. Unlike Robert, Klein actually stands for something and while his target of Robert may involve a certain amount of retribution for who he is and what he has done, for the most part Klein is using Robert as a convenient shield throwing the police off his scent while he involves himself in underground activities. As it becomes apparent that Klein may actually stand for something, Robert begins to realize that he has no persona beyond the trappings of his wealth. The dawning realization of his total narcissism and lack of meaning is unsettling. Hypnotized by the cobra that is Klein, Robert propels himself ever more dangerously toward his doppelganger, down a Kafkaesque rabbit hole.

To reveal more would diminish the power that the film holds over the viewer. From the first moment to the last, this is a thriller; it is a psychological character study; it is a historical documentation of what the French, with little prodding from the occupying Nazis, did to their own. Losey asks may questions; almost every action in this film could be accompanied by a “Why?” He answers none of them. He has left it up to you to consider the questions and the responses.

Is it anti-Semitism if you do nothing directly to support the agenda of the Nazis? Is it anti-Semitism on Robert’s part when he takes unfair advantage of a man whose only “fault” is that he’s Jewish? Is it morally wrong when you do nothing to stop a miscarriage of justice? Is the tacit belief in an “inferior race” racism? Does one have any moral obligation to others? Is naming names moral, immoral, or amoral? Losey only poses these questions but it is, perhaps, important to note that Losey, a confirmed leftist, departed the United States in 1952, never to work there again, after the House Un-American Activities Committee (HUAC) subpoenaed him to testify. Clearly some of the subtext is personal. 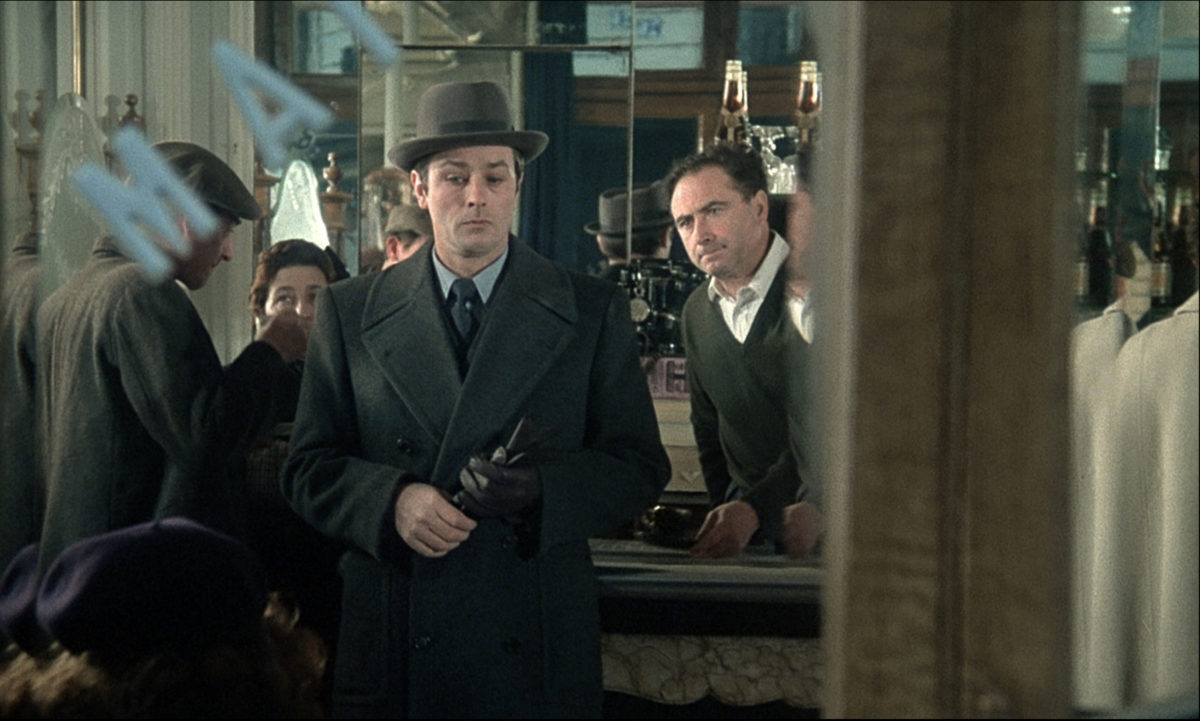 In “Mr. Klein,” Losey had an amazing cast to work with. Alain Delon, as Mr. Klein, gave one of his best performances in this film. Like other extraordinarily beautiful actors, the depth of his talent and interpretations are often undervalued. Physically he is Mr. Klein, psychologically he allows us to see the emerging complexity and confusion of his character. Michel Lonsdale as Pierre, Robert’s attorney, does what he does best. He is what the French would call a “jolie laide.” Not handsome by any stretch of the imagination, his quiet voice and minimalist expressions are ingeniously juxtaposed against fraught circumstances. Having worked with most of the important directors of the mid-twentieth century, his mere presence adds depth and credence to any film in which he appears.

Juliet Berto as Janine, the initially vapid mistress, becomes a key clue to the emptiness of Robert because as she begins to realize what is happening in Paris and the lack of concern Robert and his circle show, she fights her way out of the horror enveloping her.

Jeanne Moreau, second billed but appearing only briefly, portrays Florence, a  sexually alluring  aristocratic Jew whose attachment to Klein is what draws Robert to her, hoping for a hint as to Klein’s whereabouts and motives. She is, simply Moreau, one of the, if not the greatest actress of her generation and her short appearance in “Mr. Klein” only enhances her reputation and deepens the film.

Losey had greater success in Europe than he ever had in the United States, finding his footing in the ‘60s with films like “The Servant,” “Accident,” and “King and Country,” collaborating with Harold Pinter on the first two. Like most great directors, Losey understood the value of the writer.

The screenplay by Franco Solinas, as previously mentioned, is masterly and complex, posing questions, answering nothing. He received a best screenplay Oscar nomination for “Battle of Algiers.”

Alexandre Trauner was a much-honored international production designer working all over the world. He received an Oscar for Billy Wilder’s “The Apartment,” and an Oscar nomination for John Huston’s “The Man Who Would be King,” More significantly, however, was his clandestine work in Paris between 1938 and 1945, most notably on the films of Marcel Carné (including “Hotel du Nord,” “Quai des Brûmes,” “Le Jour se Lève,” and most significantly “Les Enfants du Paradis”); clandestine because Trauner was a Jew.

“Mr. Klein” received seven César nominations, including nominations for editing, sound, cinematography, as well as a nomination for Alain Delon as best actor. The film won Césars for best film; Losey, for best director; and Trauner, for best production design.