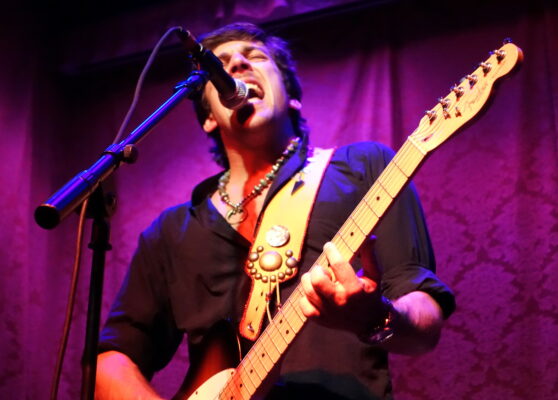 Zeal Levin is one of the rising stars to come out of Saint Rocke’s Tuesday Open mic night. Photo by Rebecca Deane

“We wanted to do more for local artists,” said Reid “Reidiculous” Clow of Saint Rocke. “From the ashes of just a boring Tuesday night, it rose like a phoenix.”

The scene has evolved into more than just an open mic. It’s become a nurturing environment.

“We feel for the starving artist,” said Katie Henley, Saint Rocke’s manager. “Of course, we have no cover, or cost to play, and have $2 tacos and drink specials.”

A mashup of talented musicians took advantage of the open format. Impromptu jamming and spontaneous rocking out has become a common occurrence.

Kimberly Deckman, the Sestra sisters and a few other regulars formed the first band out of Open Mic Night, called Breaking Seasons.

Backed by a professional rhythm section,  with a dash of trumpet to add flavor, one of the night’s recent standouts is the soulful Zeal Levin. He played his first show November 18.

“The sweat dripped from his pores while on stage screaming passions,” said Clow. “Zeal got the audience grooving and feeling the vibrations on the dance floor. It’s fun to watch the various effects music has on people; the ways they dance, the smile it puts on their faces. Zeal and his band had a room full of all different types of dance moves, smiles, and grooving locals.”

A natural fruition from the scene is a mixtape dedicated to the Open Mic Night performers. The Saint Rocke Local Artist Fall Mixtape is compiled from recordings once from September, October, and November.

“We will be releasing the mixtape digitally so artists and music fans can share and promote their live, acoustic tunes, along with their peers, all for free, and with ease,” said Clow.

“Open mic is literally the best way to get your foot in the door,” Clow said. “Or in this case, on stage.”