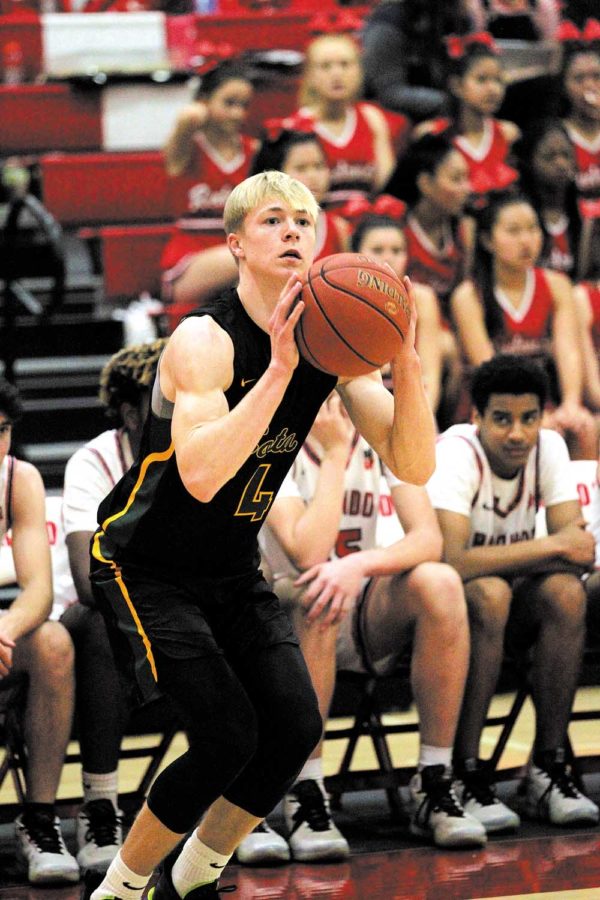 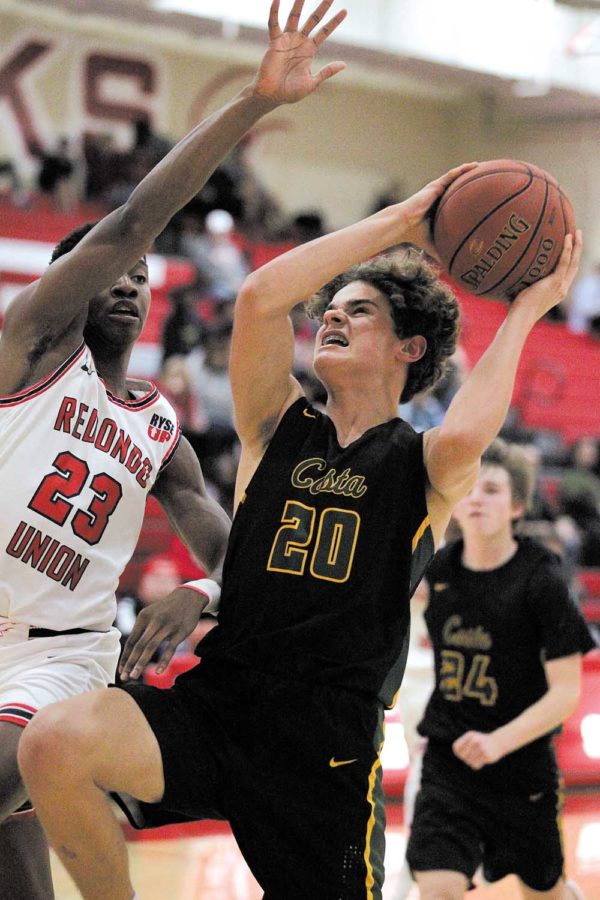 Jesse Waller rotated in during the second quarter to deliver Costa the halftime lead. 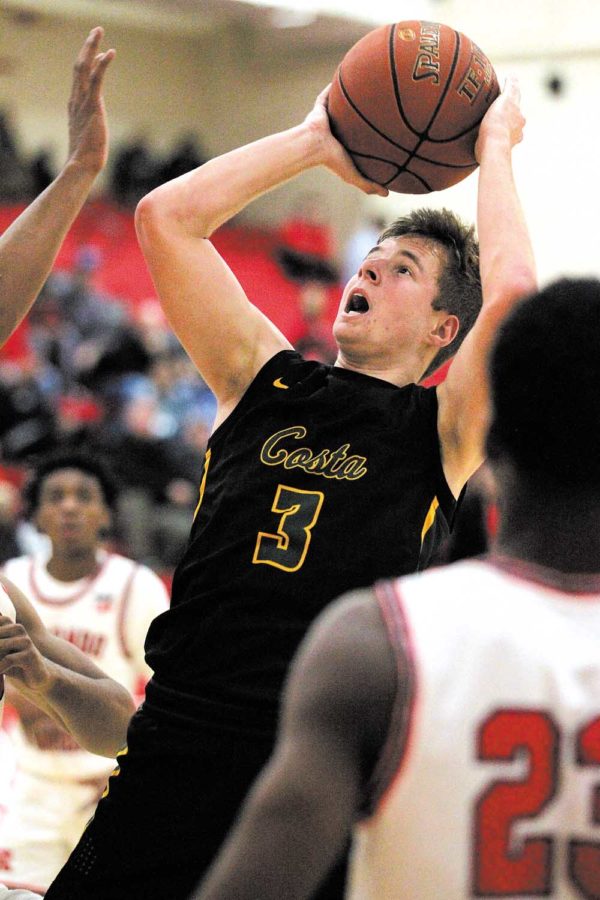 The win puts the Mustangs in the driver’s seat with a 5-0 league record, while Redondo fell to 3-2 in league. The Sea Hawks are tied with both Peninsula and Palos Verdes after Peninsula beat PV Tuesday night.

In other words, if Costa wins out or suffers just one loss from here on out they will grab their first Bay League title in nearly 20 years.

“That’s been our goal since we started practice,” said Mustang Coach Neal Perlmutter. “All our hard work is paying off.”

“This is something I really wanted to accomplish before I graduated,” said Tyler (Ant Man) Antrobius, who led the way once again with 23 points, 6 rebounds and 4 crucial, game-changing steals. “We all just wanted it so bad.”

The roller-coaster game came down to senior leadership. Costa’s Antrobius, Max McCalla and Matt Cammock all made key plays in the fourth quarter while Sea Hawk senior leaders Xan Wesley and Trent Smith missed key foul shots that could have put them on the winning side.

Smith, a quicksilver point guard who can penetrate at will, missed two free throws with his team trailing 51-48 in the last minute. Immediately afterwards he appeared devastated. His body language showed just how much the game meant to him and his teammates.

“Trent is an emotional kid, and he wears his emotions on his sleeve,” Redondo Coach Nick Welch said. “I have confidence he – and our entire team – will come back from this loss.”

Still, Welch admitted he was “very disappointed” at the bleak prospects for an eighth straight Bay League title. The Sea Hawks would have to win out and hope that Costa loses twice just to gain a tie for the championship.

“It’s not impossible,” Welch said. “We’re just going to take it one game at a time and see what happens.”

It was a game of runs. Redondo had the first run, grabbing a 13-11 lead after one quarter. Costa came roaring back behind sharp-shooter Antrobius and floor general McCalla, who had only one turnover while constantly handling the ball in the face of Redondo’s fierce defensive pressure.

Perlmutter, as usual, shuffled players in and out. His rotation goes 12 deep. He typically gets an unexpected boost from one or two of the subs, and this game it was 6-foot-3 sophomore forward Jesse Waller, who had several key baskets in the second quarter to help Costa take a 24-23 halftime lead.

But Redondo started the third quarter strong and surged to a 28-24 lead behind the strong inside play of Caike Gadoy and Wesley.

Costa fought back and took a 37-33 lead heading into the fourth quarter when  Antrobius swished a three-pointer that just barely beat the buzzer.

All game long the Mustangs forced Redondo’s 3-point specialist, Jack Dickinson, off the perimeter after he hit the first bucket of the game to give the Hawks a quick 3-0 lead. After that he had several failed drives to the hoop that left him sprawling on the floor. “That was part of our game plan,” Perlmutter said. “Any time a guy like that has to resort to driving to the basket that’s probably going to help us.”

But Dickinson finally picked up a loose ball and nailed a trey to bring the Hawks within 39-36. With four minutes left, Wesley threw in a short hook and Kendal Parker hit two foul shots to give Redondo a 43-41 lead. Antrobius drilled yet another trifecta to take the lead back at 44-43. It was a lead the Mustangs would never relinquish, thanks to a sweet pass from McCalla to Richard Kick that built the lead up to 46-43 with two minutes left.

McCalla uncorked yet another clever pass that found Antrobius for an open 3 that pumped the lead up to 49-43. Redondo had one more chance to get back in it, but after Smith missed his two foul shots it was just a question of the Mustangs hitting their own foul shots. Antrobius and McCalla each hit one of two for the final 4-point margin.

When the final buzzer sounded the Costa side of the gym erupted while the Redondo side watched in shock. It was a sight they hadn’t seen for a generation: the Mustangs beating the Sea Hawks.

And doing it on the Sea Hawks court.

“It’s the start of a new era,” said Perlmutter, the second-year coach who could be on the verge of duplicating the quick chumps-to-champs turnaround he pulled off at West Torrance a few years ago.

“For the last 19 months we’ve been working towards this moment. Our players are getting better game by game, and it’s a wonderful thing to see.”