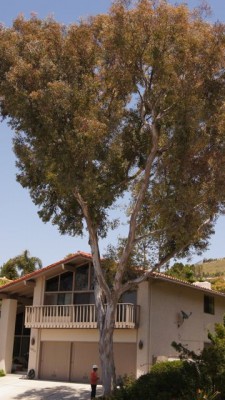 A 43-year-old Eucalyptus tree drew support from a contingent of Palos Verdes Estates neighbors last month who tried unsuccessfully to save one of the few big trees left on the block.

The city council on May 8 approved removal of the tree that grew in the right-of-way in the 1200 block of Via Estudillo. The next day by noon only a stump remained.

“I was so upset because there’s just no reason to remove a healthy tree that was not creating any harm to anyone,” said Yu-hsin Chen, who helped organize a petition drive to save the tree.

Prominent Los Angeles attorney Paul McNamara, and wife Christine, petitioned the city for the tree’s removal because it blocked their ocean view from Via Coronel one block above the tree. The homeowner directly behind the tree on Via Estudillo reportedly didn’t care either way.

More than 30 people petitioned to save the tree and about a dozen spoke at the city council meeting. Chen worries the decision could set precedent for anyone to have a healthy tree removed because it blocks their view.

“It seems like every year it’s a common subject for someone to want to take down a tree for their ocean view,” Chen said. “The argument has always been that there is an ocean view. I think the ocean view has always won out in these discussions and these hearings.”

Factors used to evaluate whether a tree can be removed on public property include appearance, privacy, view obstruction and natural amenities, which consider whether the tree is healthy or potentially damaging to adjacent property.

The process involves first going through the city’s Parklands Committee, which voted down the petition for removal of the Eucalyptus tree several months ago.

“The Parklands Committee denied it because they felt there was enough neighborhood interest and the tree contributed to the character of the street,” said Judy Smith, PVE city manager.

About 10 healthy trees are removed each year because of views, said Allan Rigg, the city’s public works director. Overall, the city plants more trees than it removes, Rigg said. At the moment, PVE maintains 12,000 trees in parks and right-of-ways.

“One of the guiding principles that’s used is a recognition that we have an aging urban forest,” Rigg said. “In some places it’s an opportunity to increase the health and the diversity of the urban forest.”

Rigg denied the latest tree would set any precedent for other trees that could potentially be removed.

“It really doesn’t mean anything as each evaluation is separate and depends on the merits of the individual application,” Rigg said. “It really is an open process so that what’s best for the community is evaluated in each one.”

A large part of the applicant’s argument rested on the loss of property value with an obstructed ocean view. Chen said the potential loss to her own property values in part drove her desires to keep the tree.

“It was a tree I enjoyed from the balcony of my home,” Chen said. “It’s a tree you stand under and are overwhelmed. It’s a part of our street.”

As part of the condition for removal, the McNamara’s agreed to pay for the planting of a tree in a different part of the city.