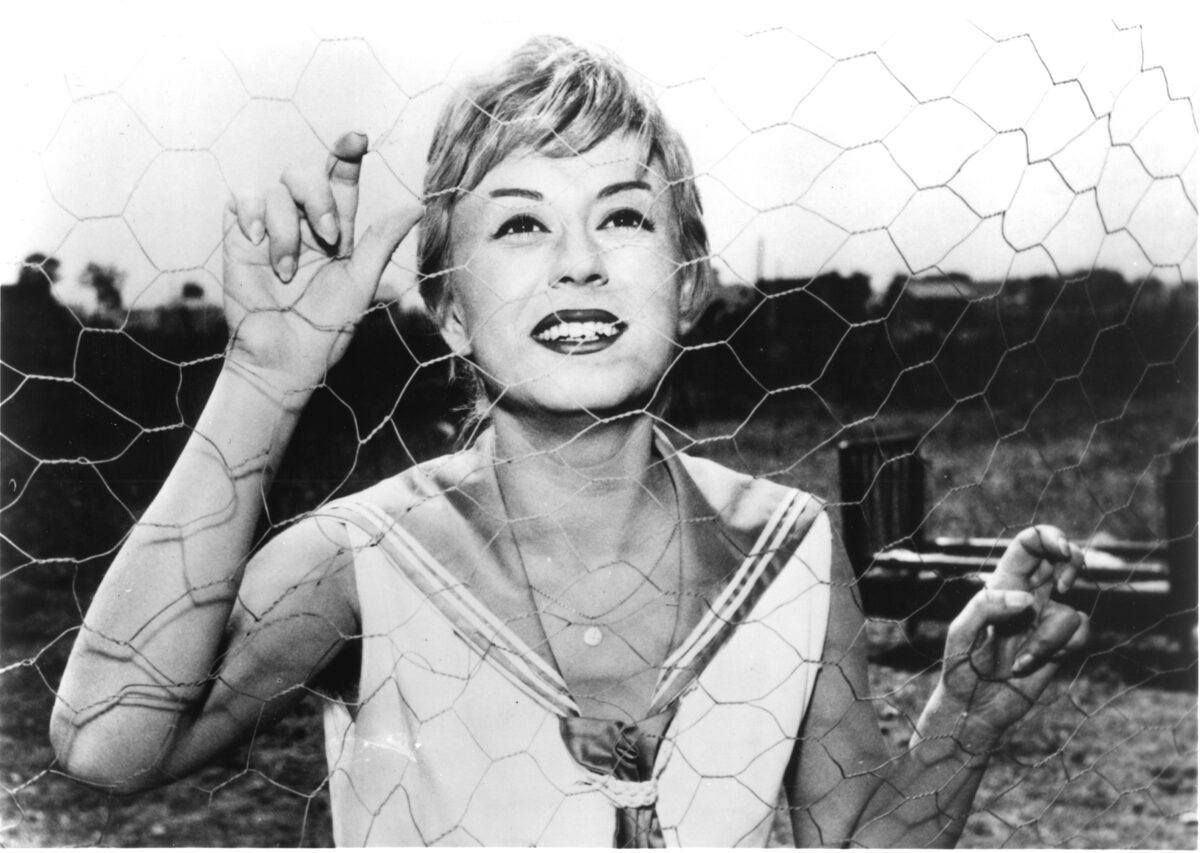 Giulietta Masina as Cabiria in "Nights of Cabiria." Photo courtesy of Rialto Pictures.

Tapping into and going beyond the Italian post war Neorealism film movement that had a more politicized vision of the poor with an emphasis on injustices inflicted on them, director Federico Fellini homed in with a razor-sharp lens on individuals from the lower fringes of society and their struggles to survive. “Nights of Cabiria,” which won the 1958 Oscar for Best Foreign Film (his second in a row, having previously won for “La Strada”) is a non-judgmental, clear-eyed, and somewhat magical realist view of the life of Cabiria, the classical hardened prostitute with a heart of gold whose dreams are lofty but grounded in the reality of her circumstances as she plies her trade along the Passeggiata Archeologica in Rome. Cabiria, a contradiction of innocence and cynicism, believes there is a rainbow at the end of her meager pot of gold.

We first meet her as she is flirting and running in a meadow beside her lover Giorgio, handsome to a fault. They approach a scenic lake. She gazes at him lovingly, twirling in a haze of adoration. And as she twirls and hums, he quickly grabs her purse and pushes her into the river, leaving her to drown. The men along the bank do nothing; the children, swimming in the river, rescue her. That the children save her and the men shrug is fundamental to Fellini’s view of the society in which Cabiria finds herself.

Cabiria is a proud woman. She owns her home, a cinder block box, and, as she lies to her best and only friend Wanda, Giorgio meant nothing to her and the money wasn’t that much. But yes it was. Donning her best chicken feather wrap, she and Wanda walk down to their corner for another night of work. Cabiria can be fierce as she fights with one of the hookers and dismisses the pimp of another. She’ll show them what she’s made of and hops a ride to the Via Veneto, the sociological equivalent of a light year from the Passeggiata Archeologica. 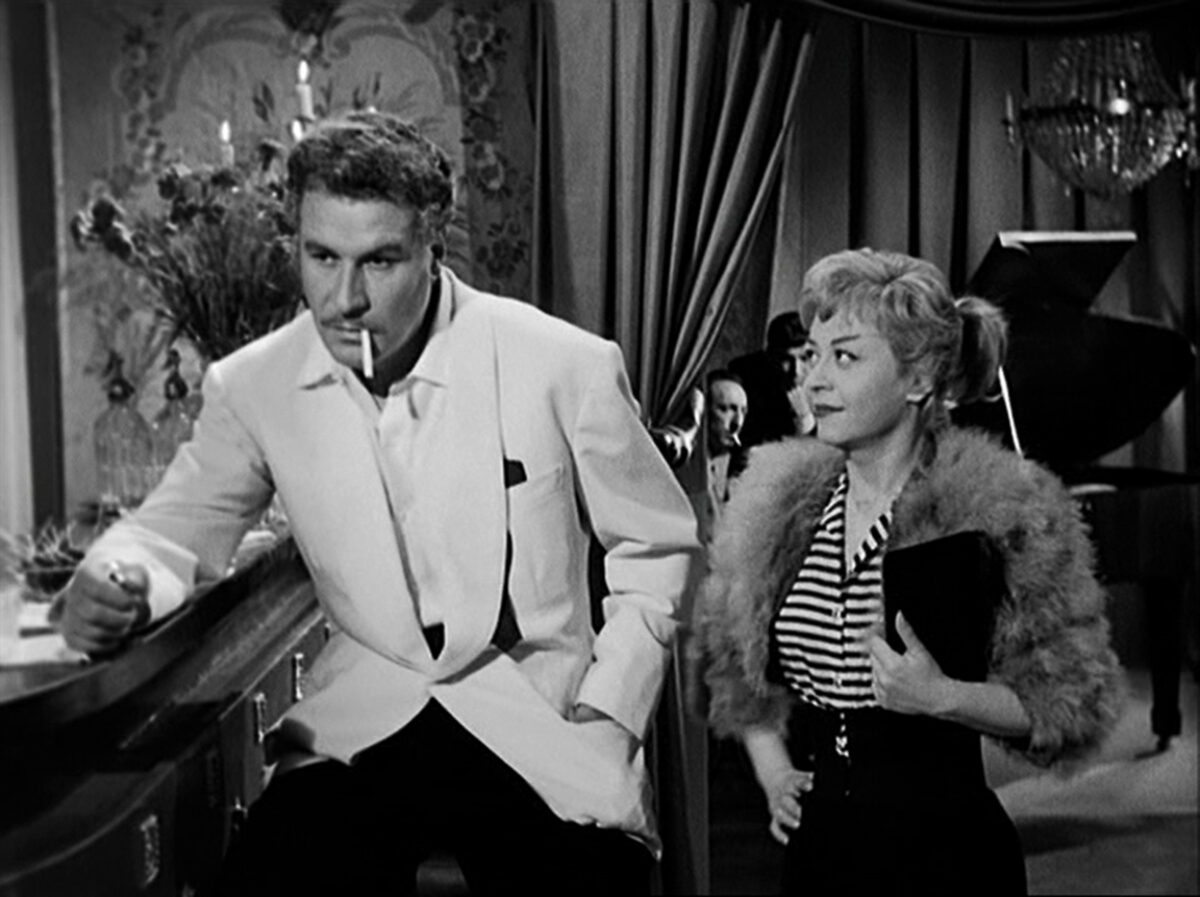 Alberto Lazzari as Amedeo Nazzari and Giulietta Masina as Cabiria in “Nights of Cabiria.” Photo courtesy of Rialto Pictures.

Her adventures, and, she hopes, her new life begins when a famous movie star picks her up, squires her to a night club and then to his palatial manor. He has just broken with his glamorous mistress and has no intention of being alone. Cabiria is beyond thrilled. His butler delivers champagne, caviar, and lobster for their dinner. Her first thought? How to prove to the other street walkers that she was there. Would he autograph a photo indicating that she was in his house? He agrees, showing a tenderness that belies his world-weary cynicism. But suddenly the mistress reappears, begging forgiveness. He quickly ushers Cabiria into the bathroom, locking the door behind him. The next morning, he sneaks her out, handing her an unwanted wad of cash. Still, she was a queen for an hour.

Returning to the corner where the discussion revolves around the celebration of the Madonna and the granting of wishes, Cabiria will have none of it. She has everything she needs, or so she states. Hitching a ride into town, she is instead dropped in the middle of nowhere. She has happened upon the caves outside Rome and spies a man distributing food to the destitute who live in them. Curious, she follows him and discovers a woman she knew, a once-famous prostitute now living below ground, dependent on his periodic distributions. The man with the sack, not attached to any religious order, follows his own heart and conscience helping those less fortunate. Cabiria is stunned. She has never met a selfless soul. She will go to the Celebration of the Madonna and ask that she be able to change her life.

But religion is just another circus with false promises and a hand in the till. Will she ever find love? Will she ever get married and have children? Her dream is small but so out of reach until the night she meets Oscar, the bland accountant who professes his love. Perhaps they have a future. Will he make her dreams come true? Is he really different?

Fellini, writing with Ennio Flaiano and Tullio Pinelli, with whom he had collaborated on “La Strada” and would again on “8 ½” and “La Dolce Vida,” also used Pier Paolo Pasolini (“The Gospel According to St. Matthew” and “Mama Roma”) to shape the authentic Roman dialect. “Nights of Cabiria,” unlike the neorealist films that preceded it did not promote or espouse a political position on the fate of the poor and the indifference of the government toward their situation. One cannot say, however, that Fellini was indifferent to politicization because he subtly and subversively revealed the hypocrisy of the church with a capital C.

One passage is of special note. The Catholic Church hierarchy of Rome demanded that one scene be removed (actually the government had demanded others but when the Church approved them, the government censors relented). Surprisingly, the scene that was removed was that of the good Samaritan, referred to as the man with the sack, who distributed food to the cave dwellers. The objection? He was not affiliated or sanctioned by the Church to do so, thus making the Church look uncaring that an ordinary citizen might take its designated role. That scene was not restored until 1999. As powerful as the Vatican seems today, it has only a scintilla of the influence that it could exert in the Italy of the 1950’s. 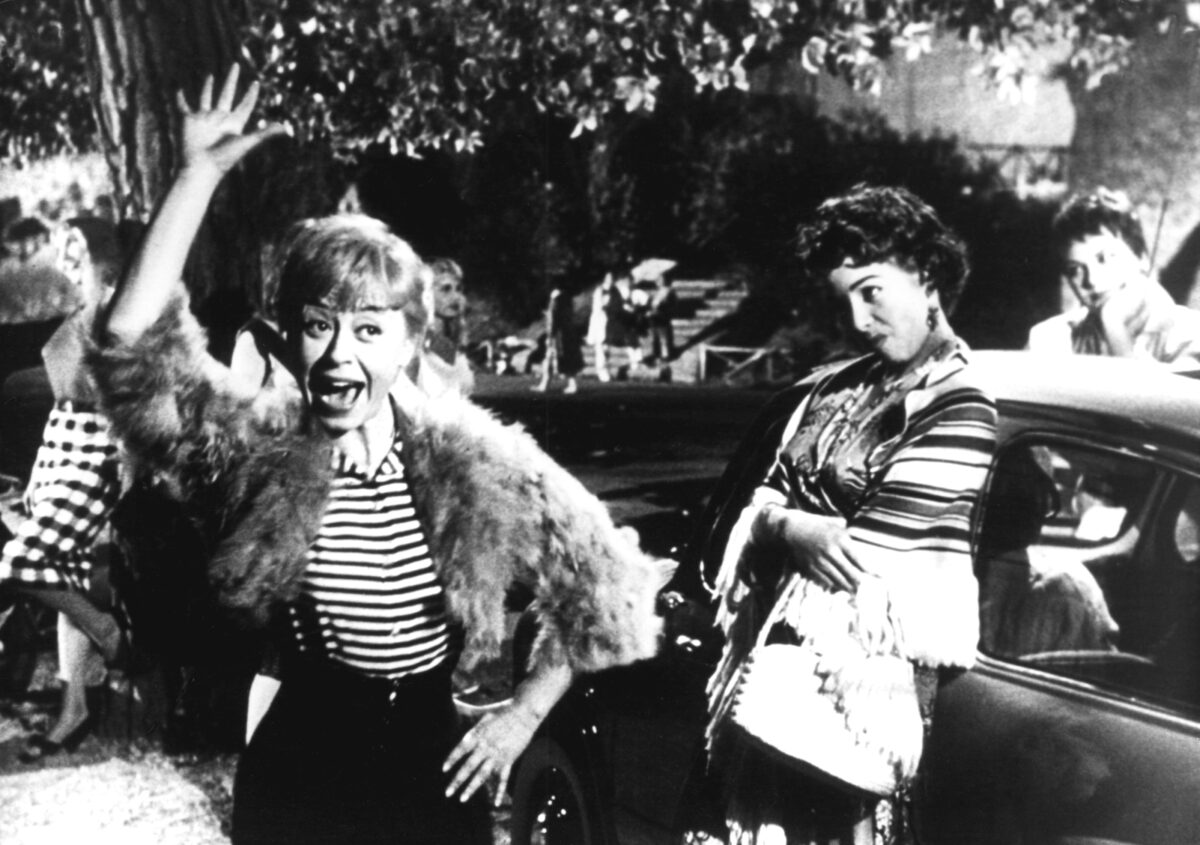 Giulietta Masina as Cabiria in “Nights of Cabiria.” Photo courtesy of Rialto Pictures.

Words cannot fully express the beauty and wonder of Giulietta Masina as Cabiria who won Best Actress at the Cannes Film Festival for this role. Her ability to retain a visible optimism in the face of soul-searing disappointment that cracks her in half is without peer. Beautiful one moment and hardened and cynical the next takes you on the roller coaster of her life. Her tiny physical being is reminiscent of Charlie Chaplin in her movements, in her eyes, in her ever hopeful uplifted chin in the face of ruin. She is every Chaplin hero as his hopes are dashed, and yet he gets up once again. Her sheer dancer’s physicality as she mambos with joy or collapses when beaten down is balletic in form. If she had done nothing but “Nights of Cabiria” her reputation as one of the greatest actresses of her generation would have been assured. But this performance was one of many from “La Strada” to “Juliet of the Spirits” to “Ginger and Fred,” all for her husband Federico Fellini. He jealously guarded her for his own films.

The rest of the cast is exemplary, filled with names that might be unfamiliar to an American audience but definitely of note. Franca Marzi as Wanda, Cabiria’s best friend, is a mistress of the skeptical look. Amedeo Nazzari, playing Alberto Lazzari the movie star was, indeed, a movie star whose career started in the 1930’s and crossed over to international films such as “The Sicilian Clan” starring Jean Gabin and Alain Delon, “The Best of Enemies,” and “The Poppy is Also a Flower.” Knowing full well that Fellini was basing the character of Lazarri on him, he was a good sport and dove in, giving one of the most sympathetic male performances, albeit still a cad, in the movie.

Of special note is French actor François Périer as Oscar. He was actually foisted on Fellini due to a contractual obligation to employ a French actor in the film. His ambiguous portrayal of Oscar, at once kind and threatening, almost simultaneously, is key to the story’s resolution, if you can call it that. Oscar’s relationship with Cabiria is heart-stopping. Périer was an established theater and film actor whose long career, also beginning in the 1930s, was spent working for the best international directors such as for Costa Gavras (“Z”), Jean-Pierre Melvile (“The Red Circle,” “Le Samouraï,”), Marcel Carné (“Hotel du Nord”), Alain Renais (“Stavisky”), and Jean Cocteau (“Orpheus). Foisted, indeed!

I have often had ambivalent feelings about Fellini as a director. In many of his films he seems to have had the philosophy that more was never enough. Not so here. “Nights of Cabiria,” stripped of pretense and distilled to realistic characters with believable problems, is a heart-wrenching drama that offsets tragedy with comedic touches.

Neil Simon chose this film on which to base the musical “Sweet Charity.” Fellini actually received a credit on the musical (although he was not happy with the result). Realistically speaking, there is very little commonality between Cabiria, the whore, and Charity, the taxi dancer. But, the next time you hear the song “If My Friends Could See Me Now,” think back to Cabiria in Amadeo’s bedroom being served caviar and champagne: “If they could see me now, that little gang of mine. I’m eating fancy chow and drinking fancy wine.” It is, however, Fellini who has served us the fancy chow with “Nights of Cabiria,” a dinner to be savored over and over again, year in and year out.

This 4K restoration is spectacular. The film is crisp and looks brand new, allowing us to see all the nuances captured by cinematographer Aldo Tonti. A joint French and Italian effort with new subtitles, we are, as ever, grateful to Rialto Pictures for releasing it to theaters. As with most Italian movies, certainly of this era, there is little that can be done with the sound. I don’t know whether they were working with primitive equipment, or whether they filmed so much outdoors, or the fact that all the dialogue was dubbed in the sound studio, but a tinny, flat quality remains and the words we hear rarely go along with the lip movements we see.

Opening Friday December 17 at the Laemmle Theatres including the Royal, the Town Center in Encino, and the Playhouse in Pasadena.