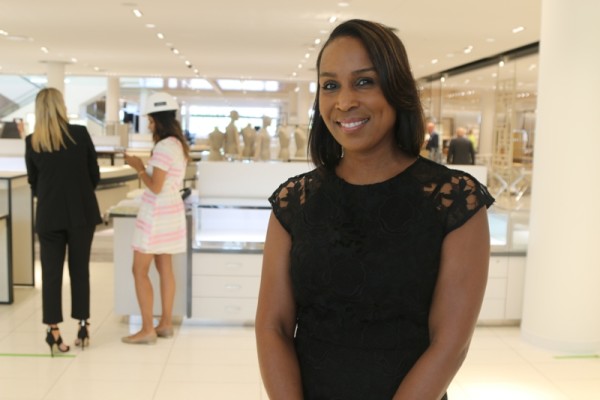 Before Nordstrom, there were Bullock’s, I. Magnin and J. W. Robinson. Before South Coast Plaza and The Beverly Center there was Del Amo Fashion Square. When developer and philanthropist Guilford Glazer built the three million-square-foot Del Amo in 1971, it was not only the largest shopping center in America, its luxury, carriage trade anchors, Bullock’s and Robinson, made it Southern California’s most popular high end shopping destination.

But by the mid 1990s, Bullock’s and Robinson had been absorbed by the notably non carriage trade Federated Department Stores and Del Amo had lost its lustre.

“You don’t have the stores we want,” Palos Verdes neighbors told the center’s long time property manager Elana Butorac. The neighbors expressed their disappointment by taking the freeway south to South Coast Plaza and north to Westside shopping Meccas. 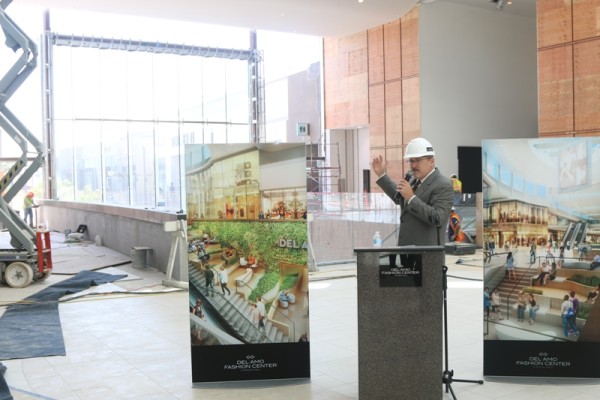 Meanwhile, the increasingly wealthy South Bay became a magnet for high end retailers. Manhattan Village Mall opened in the early 1980s. It has been remodeled twice and is planning a third, $100 million remodel. South Bay Galleria introduced Nordstrom to South Bay shoppers in 1985. Plaza  El Segundo opened in 2007 and this year the new lifestyle shopping center The Point opened next to Plaza El Segundo and across Rosecrans Boulevard from Manhattan Village. 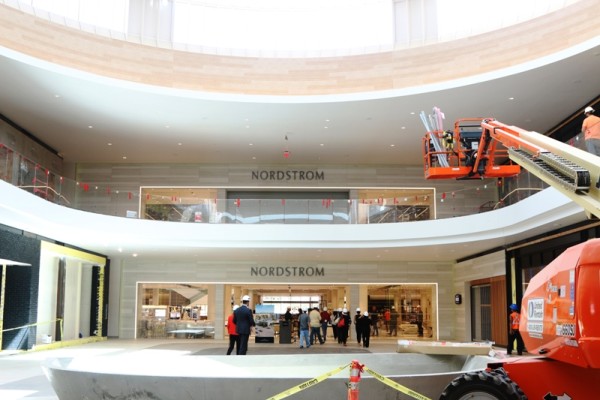 Plans to renovate Del Amo began in the 1990s, but were delayed when Glazer sold the center in 2002 to Arlington Virginia-based Mills Corporation. Plans were delayed again when Mills was acquired in 2007 by Indianapolis-based Simon Property Group, the nation’s largest retail property owner, with 325 shopping centers.

Finally, in 2012, Simon embarked on a $200 million effort to restore Del Amo Fashion Center to  the upper echelon of luxury shopping centers.

Simon leveled 180,000 square feet of mall and office space north of Carson Boulevard and replaced it with a two-story, 420,000 square-foot, environmentally state-of-the-art cathedral to upscale shoppers. It also built a four-story, 2,000 car garage, increasing the center’s parking spaces to over 11,000. 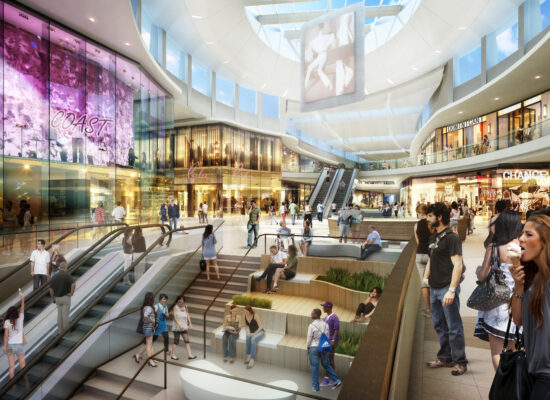 The new Grand Court is lit by a skylight 61 feet overhead. Rendering courtesy of Del Amo

Last Thursday, Del Amo marketing director Lindsey Hermance invited the press to a hard hat tour of the soon to be completed renovations. Upon its reopening on Friday, October 9, it will be the fifth largest mall in the U.S. and the largest in the Western states.

“Absolutely,” answered Charles Davis, Simon vice president of development, when asked if Del Amo’s goal is to bring back high end shoppers. He spoke inside the “Grand Entrance,” before a two-story square wall of glass with panes designed to cast shadows across the Grand Court’s curving, cream colored interior as the sun rises, until light and shadows can spill in from the enormous skylights. The skylights hover 61-feet-4 inches over the main floor.

Davis, who oversaw the three-year-long renovation, described the design theme as “beach elegance.” The color scheme, he said, is meant to evoke sails and sun bleached shells.

He described the architecture as “mid-century modern,” a style enjoying a revival and common to homes in the Beach Cities and Palos Verdes.

“We didn’t want the feeling to be too Hollywood or too Orange County, faux Mediterranean,” he said.

Del Amo built Nordstrom a new, two story, 138,000 square foot store that abandons the tomb-like design of traditional mall stores in favor of an open floor plan accented by wood and stone and bathed in an abundance of natural light from floor to ceiling windows and more enormous skylights.

Another enticement offered Nordstrom was the Bazille and Great Maple restaurants. Bazille, a bistro with a full bar, named after a French impressionist painter, opens to Nordstrom’s sales floor. Great Maple, a farm-to-table style restaurant with an emphasis on fish, is next to Nordstrom.  Last year, Great Maple was named Best New Restaurant by the California Restaurant Association.

In turn, Nordstrom brought to Del Amo its high end fashions and unparalleled reputation for customer service. Nordstrom was ranked second nationally among department store chains in a USA Today poll this year.

“In most stores, customer service is on the third floor. We put it on the first floor,” store manager Cheri Botiz said at the press conference. Nordstrom, which is known for promoting from within, hired Botiz 24 years ago to sell cosmetics on the floor of its Cerritos store. Botiz said when she was a child that her mother used to bring her from their Lynwood home to Del Amo to shop.

“Nordies,” as employees are known, will carry sales tablets for customers who prefer not to wait at one of the new store’s 70 cash registers, Botiz said.

Adding a beach vibe to what Hanor called a “nuanced mix” among the 80 new retailers will be Billabong, Hollister, Oakley and a flagship store for Manhattan Beach-based Skechers.

The new Del Amo Fashion Center, including Nordstrom will open its doors to the public on Friday, October 9 at 10 a.m.

Proceeds will benefit two charities whose supporters geographically bracket the new Del Amo’s target market. One, on the south, is the Palos Verdes Peninsula Committee Children’s Hospital Los Angeles. The other, on the north, is the Manhattan Beach-based Walk With Sally Foundation, which helps children and siblings of cancer patients.