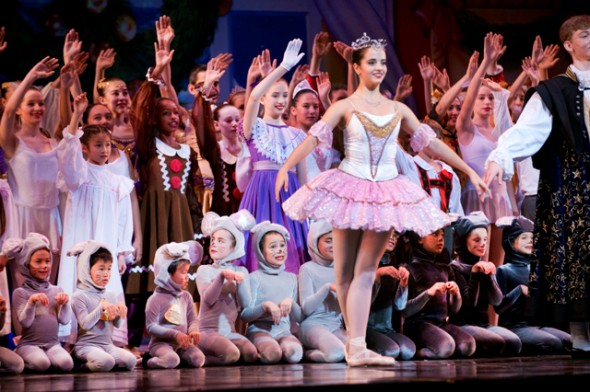 The full cast of the South Bay Ballet theatre company performs their second dress rehearsal on Sunday. Daisy Jacobson, 16, stands in the front for her bow. Photo by Chelsea Sektnan

Adapted from a nineteenth-century German fairytale and set to Pyotr Ilyich Tchaikovsky’s iconic score, The Nutcracker ballet tells the story of a young girl, Clara, whose dreams of an enchanted nutcracker prince and a faraway kingdom are brought magically to life on a snowy, Christmas Eve. The Nutcracker is a holiday staple for most American ballet companies, and the South Bay Ballet has prepared a visually stunning sensory delight for its eighth consecutive rendition of the seasonal favorite.

Under the artistic direction of Diane Lauridsen, more than a hundred young dancers – the youngest of whom is just four years old – will bring The Nutcracker to life in three, professional-caliber, full-length performances this weekend at El Camino College’s Marsee Auditorium. Cast members, in both corps de ballet and principal roles, are all South Bay Ballet company dancers, with the exception of the guest role, Grandmother Clara, which is played each year by a notable community member. For this year’s incarnation, local magazine editor Masako Kagasaki will do the honors.

The Nutcracker’s fantastical cast of characters includes exotic royals, dueling mice, waltzing flowers, and a sugarplum fairy, vividly animated by over 250 costumes based on original designs by Jenny Tomich. Hand-sewn by parent volunteers, the production’s elaborate costumes were made using the highest quality materials – no polyester, no glue – and with an expert attention to detail. Parents made every part of the costumes except the tutu bases, which, due to the highly specialized nature of their construction, were sourced from Newport Beach’s Primadonna Tutus.

According to the company’s current costume designer, Janice Munson, the 30 tutus used in The Nutcracker – ranging in style from the classic pancake tutu (a short, flat skirt made of stiff netting) to the romantic tutu (a three-quarter length skirt made of flowing tulle) – were ordered plain and then painstakingly embellished by her dedicated staff of volunteers who created matching bodices and added sequined flourishes as needed. The process was very labor-intensive.

“We try to model our costume department the way a professional costume department would work for a ballet company,” Munson explained. “Instead of having a lot of people who sew one costume at a time, we do it kind of production line and we have specialists that do things. We’ll have one mom, for example, that cuts things out. Another one will use the overlock machine. …We have another woman who just loves to sew sequins and crystals on things.”

While the company requires a minimum volunteer time commitment from its dancers’ parents, the realities of creating such a broad array of well-executed and exquisite looking costumes lead most parents to give extra time. This year’s production called for 32 new costumes and several refurbishments of old ones. Three intricately sequined red jackets for the Spanish dancers, for example, each demanded 25 hours of work. Although parents of senior company members must donate at least 45 hours of volunteer time, Munson says, “Most of [those] in costuming donate a lot more than that.”

One item that is not provided by the company’s costume department is Clara’s tiara. The South Bay Ballet has a special tradition of inviting the girl cast in the leading role, interpreted this year by 15-year-old Yumi Kanazawa, to select her own headpiece as a sort of rite of passage. In a unique twist on the original plot, the South Bay Ballet’s Nutcracker portrays Clara as an aspiring ballerina, making the role directly relatable for the girl cast to play it. And just as Clara is transported by her Nutcracker cavalier to the Kingdom of Sweets where her heart’s desires are realized, the role of Clara can transport a young ballerina that much closer to her professional aspirations.

“For the size of this school, we’re so proud of it because there are so many kids that get professional contracts,” Lauridsen says. “We rival any of the schools in the U.S., even the big famous ones, for that.”