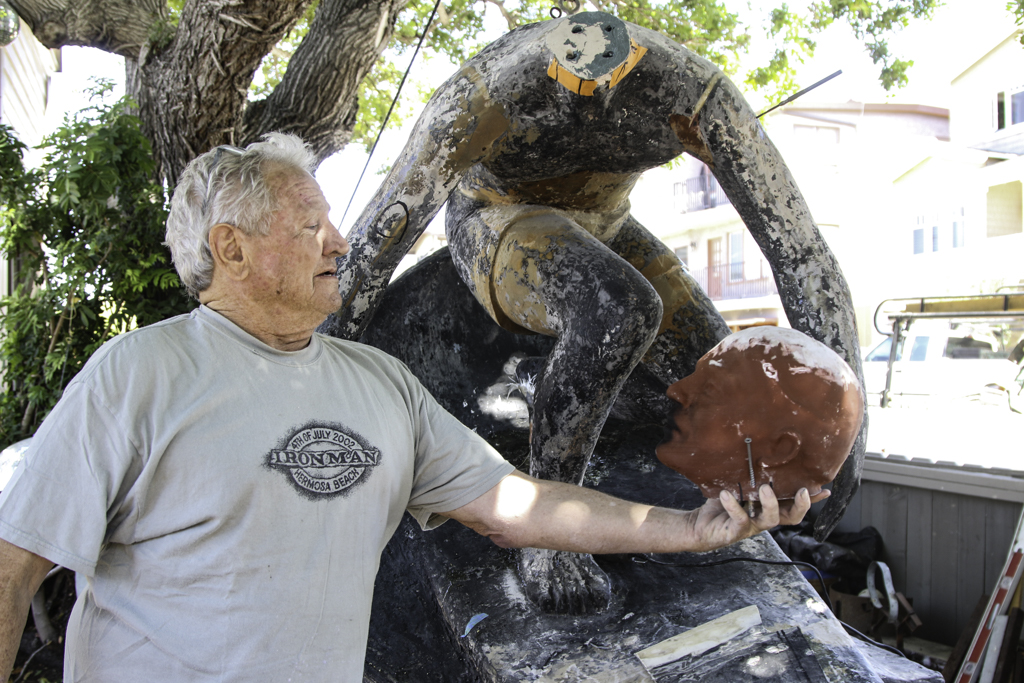 Rick Koenig holds a new head for the original Tim Kelly statue. The head was created on a home-made 3-D printer by Reuben Vollmer. Photos by Kevin Cody

In 2005, Rick Koenig was visiting Hermosa Beach Public Works foreman Mike Flaherty at the city yard when he saw an arm sticking up from a dumpster. Koenig was a planning commissioner at the time.

“Whose arm is that?” Koenig asked.

“Tim Kelly’s. The foundry just returned him to us,” Flaherty answered.

Koenig dug through the dumpster and found all nine dismembered parts of the Tim Kelly statue that for nearly three decades stood at the foot of the Hermosa Beach pier.

“Someone bagged the head. To this day, we don’t know where it is,” Koenig recalled Saturday, while working in his side yard on the statue’s restoration.

Koenig might be mistaken for a hoarder, were it not for the fact that he is President Emeritus of the Hermosa Beach Historical Society. In that role, he has taken it upon himself to preserve as much of Hermosa’s history as will fit in his yard and will not fit in the museum, including old Hermosa street signs, old store signs, and the old Mermaid piano bar. His patio’s red bricks are from the original Pier Avenue School, built in 1911 and destroyed in the 1933 earthquake. The patio’s blue ramp was formerly the 16th Street lifeguard tower ramp. Koenig helped move the tower from the beach to the museum to compliment the museum’s surfboard collection.

The highlight of Koenig’s yard, what stops passersby, is the reassembled Tim Kelly statue, suspended by a block and pulley from a large Brazilian pepper tree. 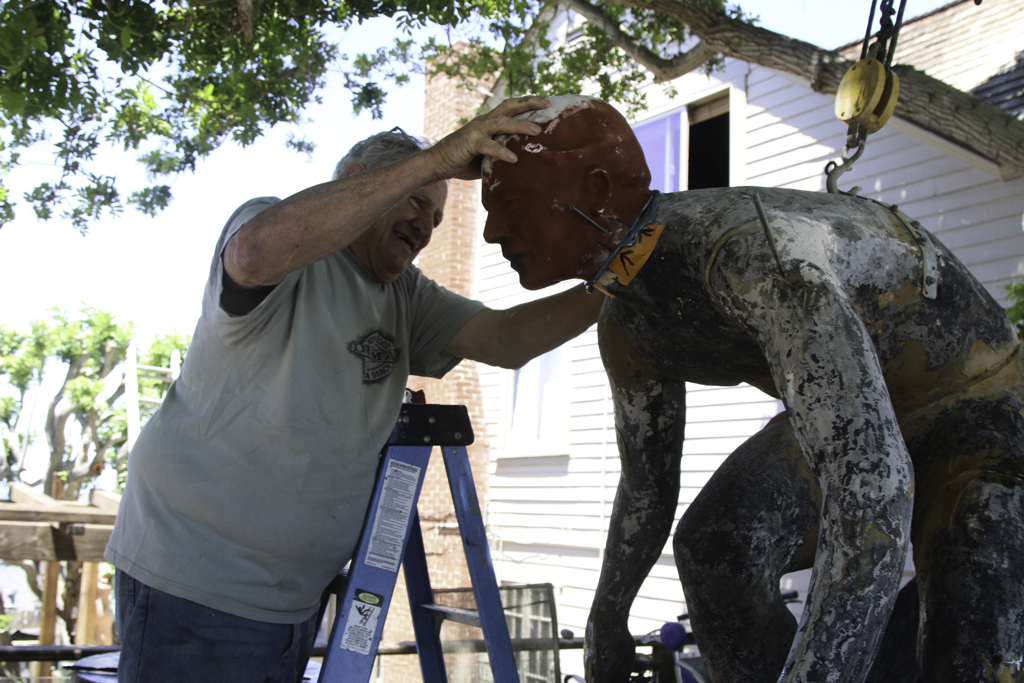 Tim Kelly was a 24-year-old Los Angeles County Lifeguard killed returning home to Hermosa from a surf trip to Trestles in 1964. The VW van he was riding in was hit head-on by a car driven by a drunk sailor.

In an interview years later, retired lifeguard Steve Vorhees said that following Kelly’s death “money just started coming in. We didn’t know what to do with it. I was president of the lifeguard association, so I talked to William Maloney, a sculptor I took a class with at El Camino College. He sculpted the statue of Tim from photos.”

The statue stood in front of the Los Angeles County Lifeguard headquarters in Redondo Beach until the early 1970s when the Charthouse restaurant was built on the sand, between the water and the headquarters. Then the statue was moved to the foot of the Hermosa pier, where it remained until pier renovations began in early 2000.

The statue was white with seagull guano and its fiberglass was delaminating when it was taken to  the city yard. As the pier renovations neared completion in 2005, lifeguards raised funds to have the statue recast in bronze and entrusted the project to former pro surfer Chris Barella, who grew up surfing at the Hermosa pier. A photo from Barella’s youth shows him and fellow members of the Mike Purpus surf team climbing on the original Tim Kelly statue. Barella had moved to Hawaii and became a celebrated sculptor of marine-related subjects.

He towed Tim Kelly in a trailer to his former studio in Ventura.

“After I cleaned it up, it looked good just the way it was. I was standing before it with my Saw Z, which is kind of like a jigsaw, and I’m thinking of all the statue has meant to me and people like me for over 40 years and now I’m going to take its head off,” Barela said in an interview that year.

“When the head fell off, it was quite a moment. Everything up to then was talk. But once I cut the head off I thought, ‘There’s no turning back now,’” Barella said.

Barella sawed the statue into the nine pieces Koenig would retrieve from the city yard dumpster. Molds pulled from the pieces were used to cast the statue in bronze.

Since the Barella Tim Kelly’s unveiling in 2005, it has become, second only to the pier itself, Hermosa’s most photographed landmark.

After bringing home the fiberglass Tim Kelly statue in 2010, Koenig began repairing the rebar, which had been badly corroded by the salt air, and welding the body parts back together. Koenig is a building contractor and an experienced welder. To replace the damaged foam and fiberglass, he sought out the advice of local surfboard shaper Dennis Jarvis. Jarvis recommended a spray foam used in surfboard ding repairs. Koenig resculpted the foam with a rotary sander and dremel and then refiberglassed it.

But he remained haunted by the missing head. 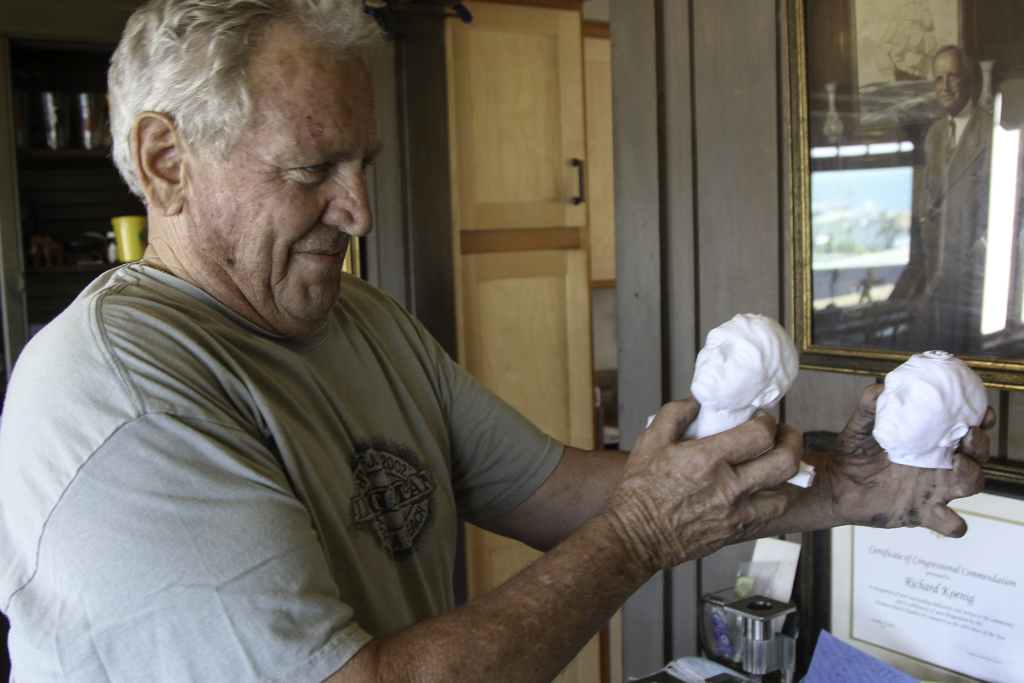 News stories about the missing head failed to produce leads. Years passed and hope for the head faded.

“I thought I might have to sneak down at night and pull a mold off the statue at the pier,” Koenig said.

A few months ago, noticing work on the statue had come to a standstill, retired lifeguard Billy LeFay introduced Koenig to Reuben Vollmer, an inventor who grew up in Palos Verdes and lived on a communal farm in Los Angeles.

A few days later, he returned with two, one-eighth scale heads scanned from the photos into his home-built, 3-D printer. Vollmer said he could have a full scale head in a few days. It would take 14 hours to print.

‘I feel like Hamlet contemplating Yorick’s skull,” Koenig said last Saturday as he stood with Kelly’s head in his outstretched hand. Yorick was a beloved court jester from Hamlet’s youth. 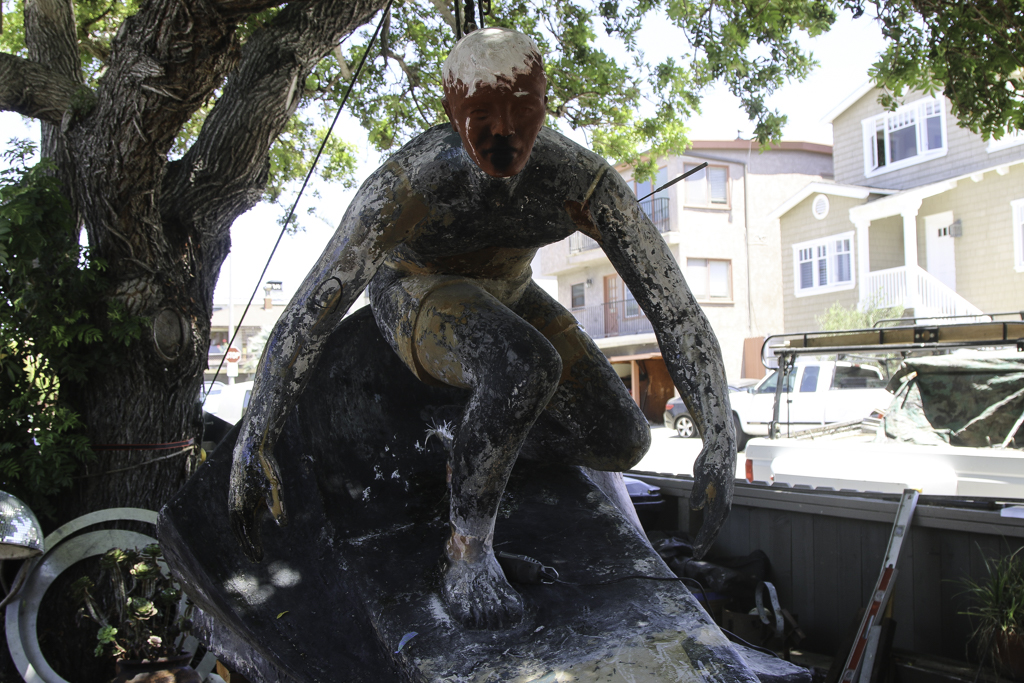 The original Tim Kelly statue will be finished with a bronze powder paint.

Koenig lined up four bolts he had sunk into the bottom of Kelly’s head with four holes he had drilled in Kelly’s neck. He squirted epoxy into the neckholes, gave the head a few paternal pats and said, “Here’s your head back, Timmy.”

The statue still needs to be fine sanded and sprayed with a powdered bronze paint Koenig recently used on the exterior of a Quonset hut in El Segundo.

Upon completion, Koenig said, he plans to light up the statue atop the pergola he built for it in his yard. ER