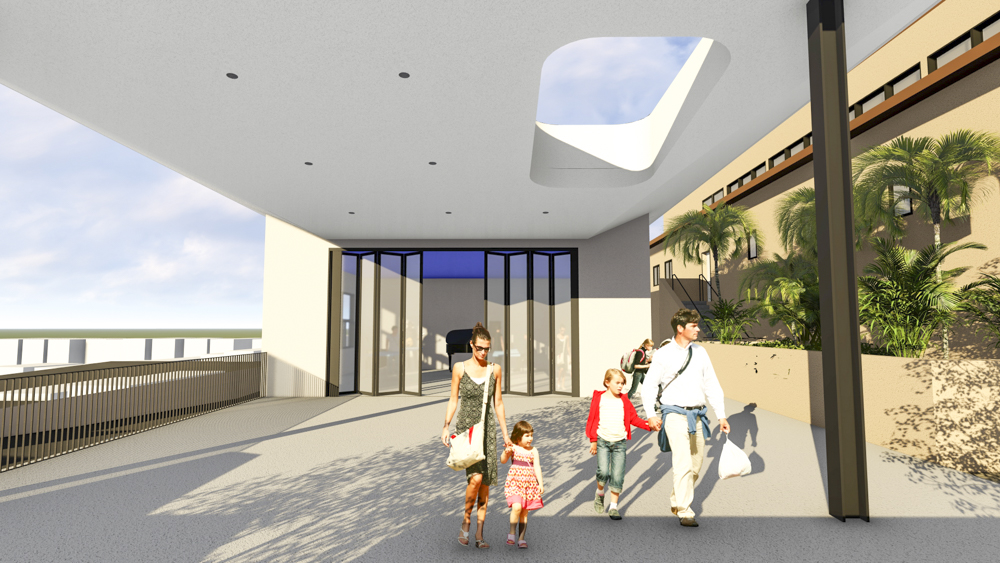 Architect Robert Kerr has designed a dozen school additions for the Catholic Archdiocese of Los Angeles. Generally, his designs compliment the school’s existing architecture. That wasn’t an option when he designed the new, 8,000 square foot classroom and conference building for Our Lady of Guadalupe Catholic School in Hermosa Beach.

Freed from the constraints of an existing architectural style, Kerr designed what he describes as “something of the moment, a time capsule.”

“Our Lady of Guadalupe’s differing styles are a way of marking how the church has moved through time,” he explained.

The original church and school reflected the sensible 1950s. The church’s remodel, on its 50th anniversary in 2008, was notable for its large rose window and cheerfully painted interior walls, but the architectural updates were consistent with the modest original. 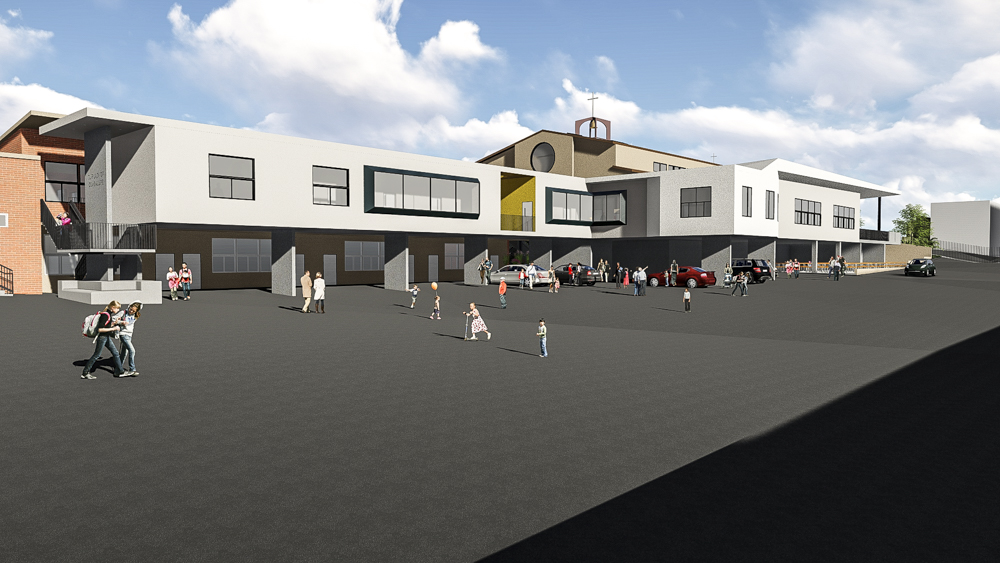 Our Lady of Guadalupe’s new arts and STEM classrooms connect to the old church while pointing to the future. Rendering courtesy of Robert Kerr Architecture Designs

“At my firm, design is a priority,” he said.

Like Hermosa Strand homes, the new building’s footprint is long and narrow. It includes a typical,  25-foot x 90-foot Hermosa lot, purchased from a devout neighbor who had hoped to build his home next door to the church.

The design is spare, in the style of contemporary Strand homes, with sharp angles, big windows and open passageways. Its exposed concrete and gray-white walls painted to look like exposed concrete will also be familiar to anyone who bicycles on The Strand. The window trim is black. 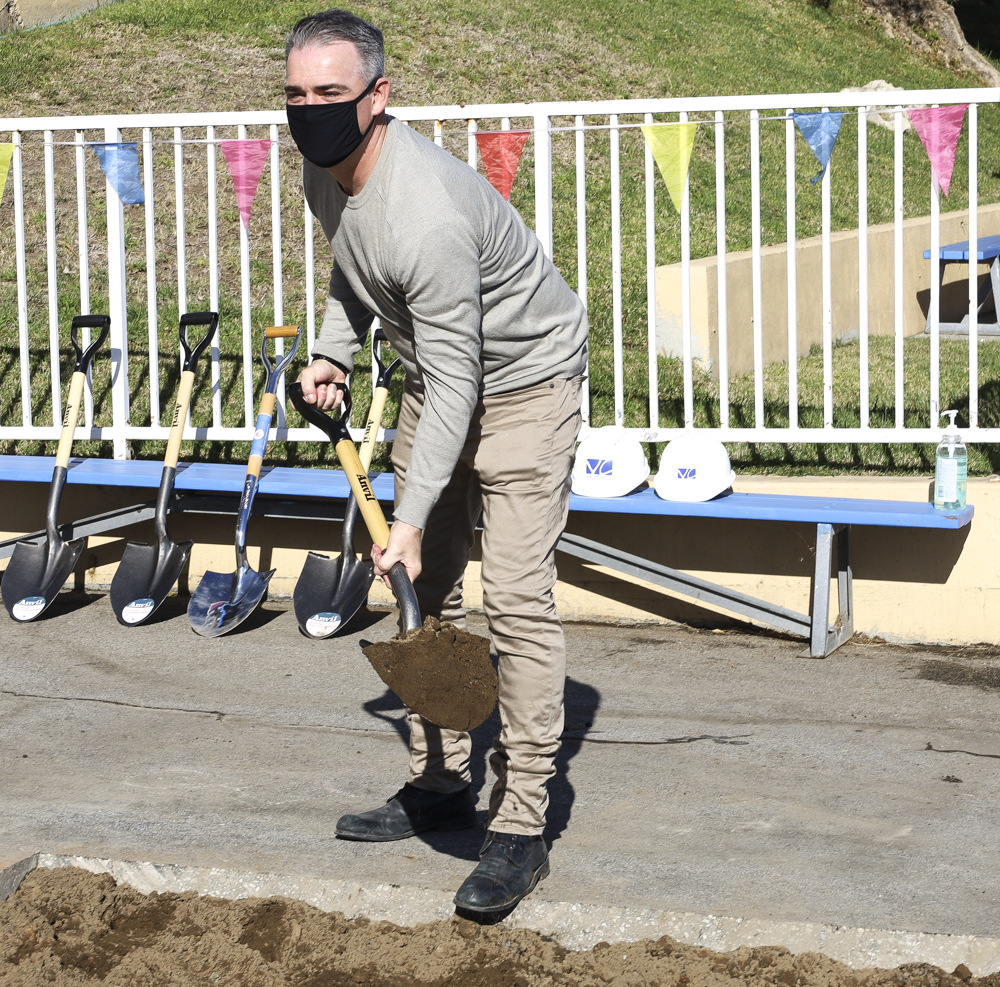 “We’re trying to be subtle with the coloring, so it fits in,” Architect Robert Kerr said at the groundbreaking, with no hint of irony.

“We’re trying to be subtle with the coloring, so it fits in,” Kerr said. Presumably, he meant with the town, not the school.

Its signature feature is a long, cantilevered roof with an opening to the sky, shaped like a floating, Calder mobile. The roof extends out from the entrance to the building, creating a place for people to shelter after Mass, on their way to the parking lot below.

The new building is elevated over the existing parking lot.

Neighbors opposed the new building when it was brought before the planning commission in 2018 because they feared it would worsen parking in the neighborhood. As a concession to those concerns, the new classrooms were designed to float over the existing parking lot. Additionally, the school agreed to cap enrollment at 280 students. It presently has 240 students.

“Preserving the parking was the biggest challenge. But it had the benefit of forcing us to tie the new building into the existing buildings,” Kerr said. The church and school are built on a sand dune overlooking the parking lot. 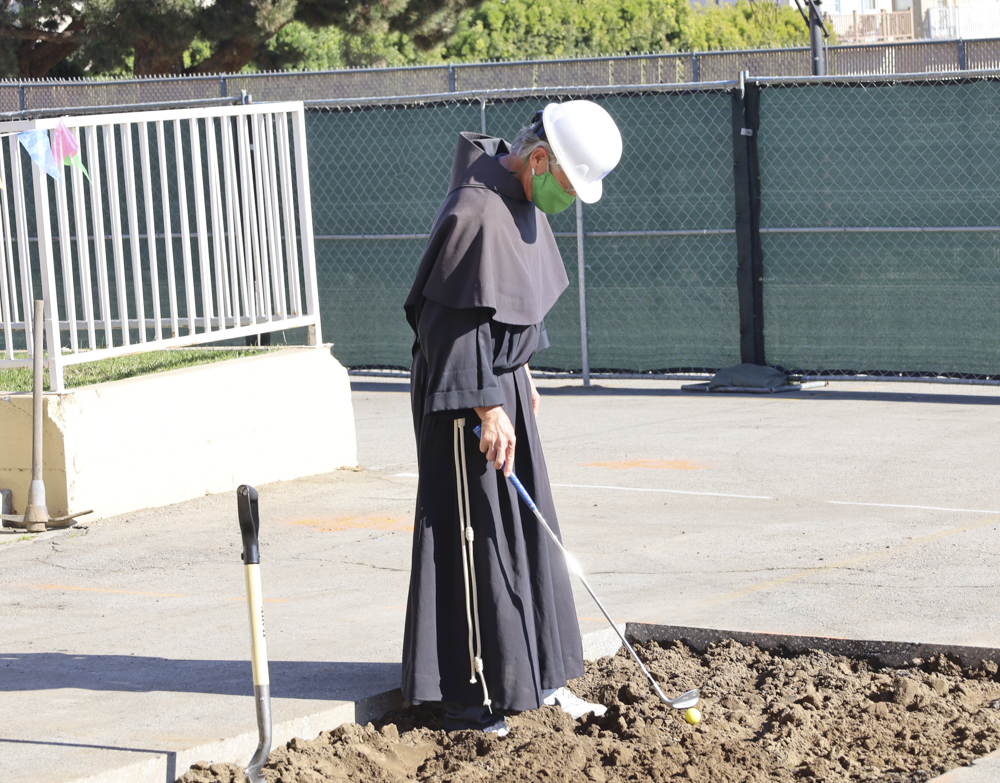 Our Lady of Guadalupe Pastor Paul Gawlowski breaks ground with a sand wedge.

“The goal from the beginning,” Principal April Beuder said, “was to bring the school and church communities together. The building was designed to create opportunities for that.”

Parishioners, including many without school age children, provided most of the funding.

Kerr said he expects construction to be completed by the end of 2021.

A blessing and groundbreaking for the project was held last Friday.

At the ground breaking Pastor Paul Gawlowski expressed appreciation to donors who, with 30 days left before the construction permits and a matching grant were to expire, stepped forward with the additional $650,000 needed to meet the $3.9 million budget.

After the ceremonial groundbreaking with shovels, Fr. Paul took a sand wedge to a golf ball teed up in the dirt and hit the ball over the fence. ER