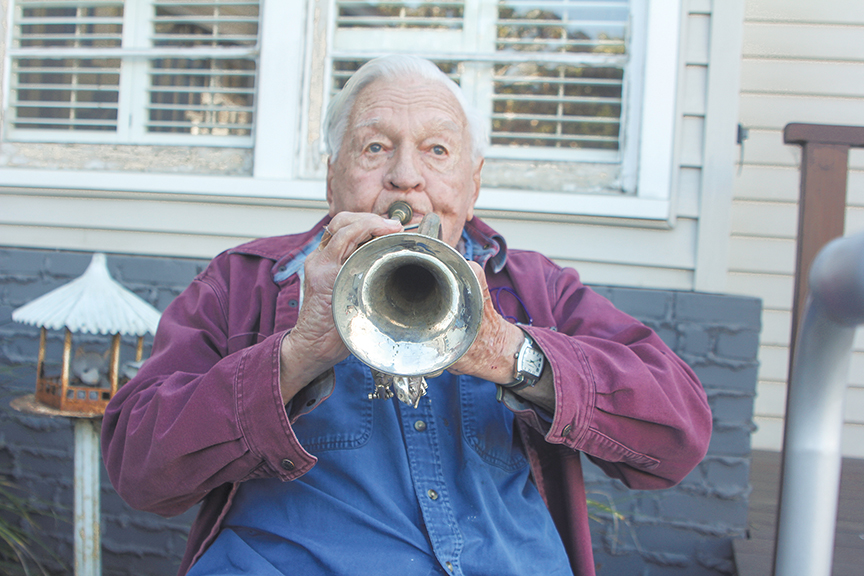 Bob White continues to play and sing Dixieland music at 93. Photo by Kevin 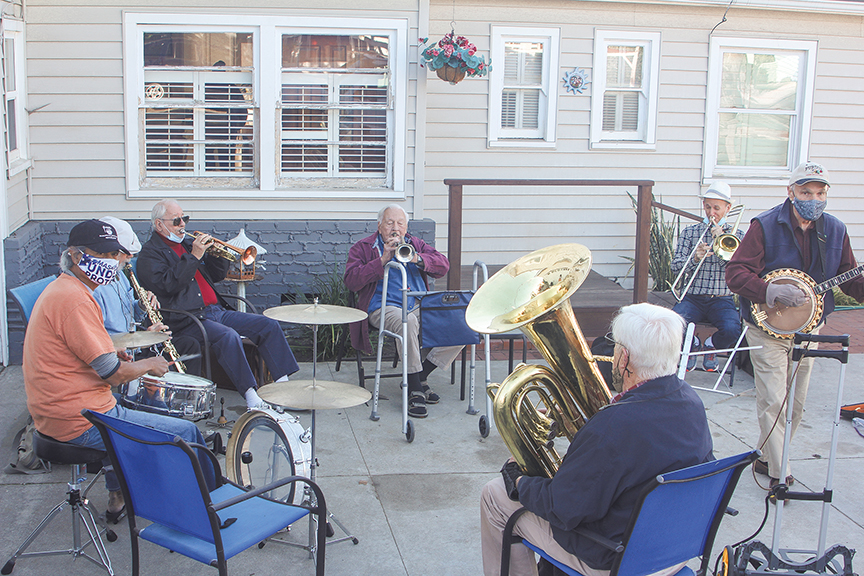 Bob White (center, on trumpet) rehearsing last week with the Hyperion Outfall Serenaders for an upcoming gig. Joining him are Louie Pastor on drums, Richard Tucker on trumpet, Ed Weiss on trombone, Jim Jones on Banjo and John Norton on Tuba. Photo

[Editor’s note: The City Council last month recognized 93-year-old Bob White, the founder of the Hyperion Outfall Serenaders, the official band of Manhattan Beach. Following are the remarks made on that occasion by Councilperson Steve Napolitano, a longtime friend of the White family.]

This year we are celebrating the 100th anniversary of the Manhattan Beach Pier, and while rumor has that Bob White was there laying the cornerstone, it’s not quite true.

We are here to honor him for his 93rd birthday, which was actually March 17. For obvious reasons we were not able to do that [then] and before we hit 94, we thought we’d do that now. His son Lincoln, who is also a very long time friend of mine, put together a whole book for me to read. So I’m going to go over some of this history, but when people ask what makes Manhattan Beach special….Bob has really lived what is special about Manhattan Beach, and has made Manhattan Beach special in his own way.

Bob White was born on March 17, 1927 in St Louis, Missouri to Bob and Gincie White. When he was a young boy, his family moved to the St. Louis suburb of Kirkwood where he and his younger sister, Mary, grew up and attended high school. As a boy Bob began playing trumpet, an endeavor that has served him well his whole life. We’ll get back to that in a little bit.

At 17, Bob joined the Navy with aspirations of becoming a pilot. The war was coming to a close, however, and his hopes were dashed. After serving two years in the Navy, he went off to lowa State University to study electrical engineering. Bob joined the Beta Theta Pi fraternity and made lifelong friends.

With degree in hand, Bob landed a job in Milwaukee working in sales for a company called Allen Bradley. He enjoyed his career, the bachelor life and two new loves, cigars and martinis. In 1956 Bob transferred with Allen Bradley to Los Angeles. Within nine months, he discovered Manhattan Beach. His first place was an apartment on 35th Street below Highland Avenue.

Business often took him to Hawaii. On one of those flights he met Connie Perrine, a United Airlines stewardess. Connie lived with roommates on 11th St. above Manhattan Ave. As Bob and Connie courted, their watering hole became Ercoles. They were married on July 30, 1960. Their first home was on 24th Street, across from Grandview school. It was at this home where Bob and Connie began a tradition of celebrating their birthdays, his March 17, hers March 11, with the annual Spring Rites and Beer Festival, an event that has continued ever since.

And I thought you were throwing that for me all these years. Silly me.

Connie worked as an airport guide at LAX and Bob continued his career with Allen Bradley. At the home of their good friends, Syd and Ethel Pattison, Bob often practiced his horn while Syd accompanied on clarinet. Like Connie, Ethel had been a United Airlines stewardess and was an airport guide. This connection to the airport served as a source for many friendships and gatherings over the years.

On one occasion, in 1970, Bob, Syd and their trombonist buddy Dale Van Scoyk decided to take their instruments to the airport to greet a visiting friend as he came off the plane. The “band” was an instant hit with all the passengers from the flight. They were also a hit with a man who offered to pay the trio to wait and play for his friend when he arrived. This outing parlayed into the first paying gig for what would become the Hyperion Outfall Serenaders, sardonically named after the nearby water treatment plant.

Not long after, banjo player Don Ryckman joined them and a true Dixieland band was born. Soon, the Hyperion Outfall was serenading audiences at weddings, bar mitzvahs, 10K races, and Little League opening day parades. They were a fixture at every Hometown Fair and Concert in the Park, from the beginning. In 1975 Mayor Joan Dontanville —  or as Bob likes to call her, Saint Joan, who is also the first female mayor of Manhattan Beach —  recognized the Hyperion Outfall Serenaders as the official band of Manhattan Beach. And that has not changed since.

Bob White continues to play and sing Dixieland music at 93. Photo by Kevin

Bob ran for school board, coached boys and girls soccer, and served as a board member and subsequently president of the Manhattan Beach Little League and Pony League. Bob and Connie enjoyed entertaining any chance they could. For decades, they hosted an open house cocktail hour every Friday night. (Why isn’t that still going on, Bob?) Sometimes it was an intimate gathering other times it was a raucous affair.

In 1986, Bob retired from Allen Bradley after 47 years. Bob and Connie got busy traveling; Germany, France Ireland England, Hong Kong and Australia were destinations they knocked off their bucket list. Band gigs Friday nights and of course Ercoles were always part of the social agenda. The kids were grown and finally out of the house.

In the fall of 2005, Connie passed away. To ease his grief and honor her memory, Bob continued an active social schedule. The band played at Hometown Fairs, fun runs, fireworks on the pier and many other events. For years, Bob ran Bobo’s Beach Bocce Ball Tournament. He stepped down from tournament leadership, passing the torch on to his younger Ercoles buddies. But his visits to Ercoles continue, where he enjoys seeing old friends.

Bob is revered for penning the song “It’s Christmas Eve at Ercoles.” If you’ve ever been there on Christmas Eve, you’ll know what this song is about. The song immortalizes the annual holiday gathering of friends and families at Manhattan Beach’s celebrated, oldest bar. With cowbell in hand, long before Will Ferrell made it famous, Bob enlists the crowd in singing at the top and bottom of every hour throughout the afternoon and into the evening. 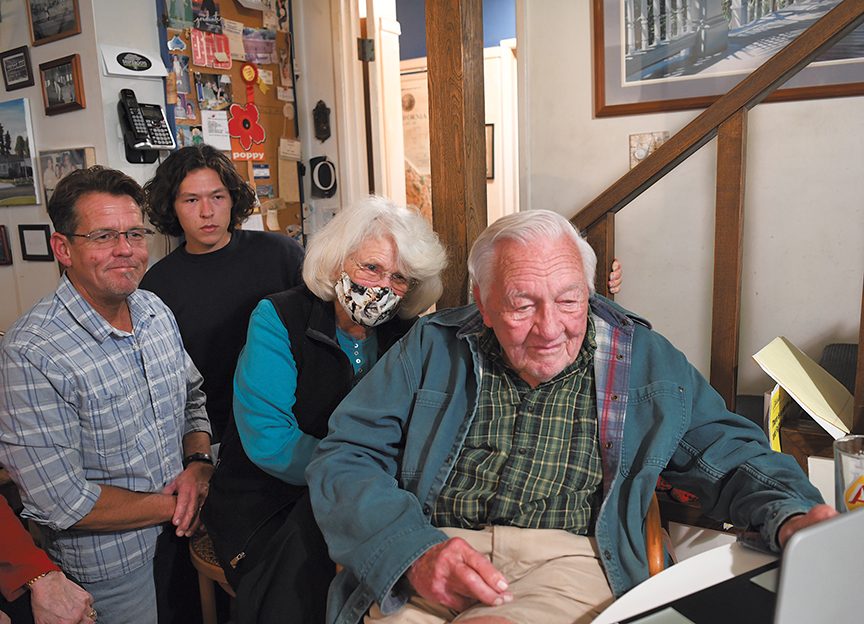 A stroke, a broken hip, and a pandemic have not kept him down. At 93, his strong spirit and gregarious personality continue to shine. Bob delights in having friends visit and attending social gatherings. He enjoys a cold beer, a martini, and a cigar every day. He is grateful to live in and be a part of the special community that is Manhattan Beach.

The council meeting was on Zoom, and White — who didn’t know beforehand he was to be honored — watched the proceedings surrounded by his family.

Mayor Richard Montgomery told him he and George Burns were his heroes. “We’ll take whatever words you have,” the mayor said. “The floor is yours.”

Bob White was short and sweet.