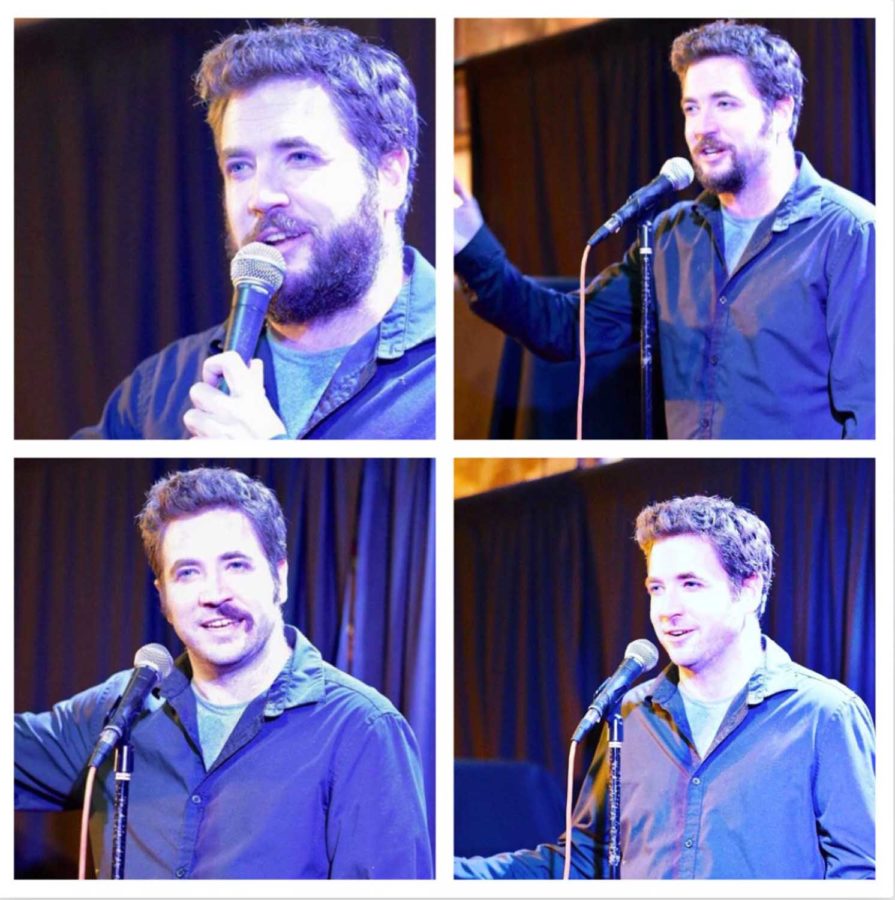 Danno Carter, losing hair while hosting Comedy Night at Pancho’s. “Nobody seemed to notice anything different, including the guys who walked into the bathroom when I was shaving in between comics,” he said. Photo by Capt. Mitch Cohen

Something strange happened on a day in early June in 2014. Two men drinking at a bar had a good idea.

Comedian Danno Carter and musician Dan Vos were having a drink at Pancho’s, the iconic Mexican restaurant at the corner of Highland and Rosecrans in Manhattan Beach, when the idea hatched. What if, they wondered, Carter hosted a comedy night right here, in this barroom?

Vos, who worked as a bartender at Pancho’s at the time, checked with management. They were in; on Monday nights, they’d tried trivia, and karaoke, and actual music, but nothing had worked. Why not try comedy?

“It was one of the few bar drinking conversations about an idea where the idea actually happened,” Carter said. “We had an idea to start on Mondays. I think a lot of people have had ideas while they are out drinking that don’t actually happen —  this one actually happened, and now it’s happening 300 times.”

It’s been a hit: the 300th Pancho’s Comedy Night happens this Monday night. The weekly show has become, if not quite a local institution, certainly the best entertainment value going on in the South Bay on Monday nights. It’s free, and the dozen or so comedians who appear each week have high-level comedic pedigrees —  Conan O’Brien, Jimmy Kimmel, Comedy Central, Netflix, and HBO are among their other stops, surely something no other free comedy night at a Mexican restaurant can boast.

The idea Carter quite literally stumbled upon five years ago possessed a cosmic comic alignment of some sort. Professional comedians, who have an absolute need to be on stage working out their craft, didn’t have many Monday night options. And Pancho’s, in addition to possessing a perfectly sized room (complete with an appropriately surreal collection of dead stuffed fish on the walls), a stage, and a sound system, had something few other comedy clubs can offer: an uncomplicatedly happy audience.

“It’s part LA comedy showcase, part classic comedy club, part weekly party. It’s the shit, ” said Caleb Synan, who frequently performs at Pancho’s and whose comedic resume includes Conan and Last Comic Standing. “The only thing every show [at Pancho’s] has in common is that it’s funny. That part is consistent. Big comics want to workout there, because it’s a real crowd of real people. And it’s just fun as hell. There’s nothing like it.”

“If you can’t have fun at Pancho’s, you better get your pulse checked,” said Councilperson Steve Napolitano, an occasional patron at Pancho’s Comedy Night. “The Comedy & Magic Club in Hermosa Beach is world famous for its acts, but it’s nice to know Manhattan Beach has a lesser known hidden gem that is Comedy Night at Pancho’s.”

Carter, who serves as host, sound man, lighting technician, talent wrangler and lion tamer in what frequently resembles the circus coming to town, is justly proud of the reputation Pancho’s Comedy Night has among comedians.

“I think they like that it’s a wildcard. It’s a different challenge,”
Carter said. “But it’s going to be fun. The crowds here are different than crowds in Hollywood. These are happy beach people, versus jaded Hollywood types who say, ‘Show me what you got.’ Most people here just want to have fun. They are excited about the show.”

“More and more end up going out with us after for karaoke at Manhattan Hennessey’s,” Carter added. “The Pancho’s wrap party, I call it, and all the comics go and sing a song. It’s almost like our second mic of the night, a different performance. It’s really fun; six dollar shot and a beer, and when we walk in the deejay usually announces to us. ‘Danno, Traven, and the comics are here.’”

Ah yes, Traven. As in Chris Traven, the deadpan comedian (and professional disc golf player) who is Carter’s best friend and the other staple of Pancho’s Comedy Night. Traven closes every show.

Carter, who was a homeless couch surfer when this all began, has moved up in the world. As a result of hosting at Pancho’s, he’s opened for the likes of Jeff Dye (who’s appeared on the Tonight Show and hosted Better Late Than Never on ABC) and Michael Costa (correspondent on the Daily Show). Most importantly, he’s now at the top of the food chain in terms of couch-surfing: he has a lawyer girlfriend, Tiffany, who has put a roof over his head and even allows him in the bed from time to time. Of course, there’s a cost and benefit to most things in life, and his newly pampered status has robbed Carter of the ability to use dating apps such as Tinder to help bring single women to the show.

“I’ve lost a lot of promoting through not being single because I used to use dating apps to get girls in here all the time,” he said. “So I actually joined Bumble BFF, which lets you search to find your new best friend. That’s my new method; it hasn’t worked yet. But the messages I get, I usually read them aloud on stage. They are just way too creepy. They say things like, ‘Hi! You look like someone I’d be interested in pursuing a friendship with!’ `I got a kick out of your profile!’ So I haven’t actually followed through. I’m not ready to be murdered yet.”

The final part of the magical equation that is Pancho’s Comedy Night is the room itself. About 40 percent of the audience, Carter estimates, are regulars —  including one of the best laughers on the planet, Dija.

There’s also the unremittingly sweet and skillful bartenders and waitstaff and the fact that Pancho’s Comedy Night is on the radar for an unwieldy array of weirdos.

“One time a guy showed up here with a set of juggling pins,” Carter said. “He walked up to me and said, ‘Are you Danno?’ I just said, ‘Nope.’ I know where this is going. It’s quicker if I say no.”

On a Monday night in April, a guy Carter hadn’t seen in four years showed up, distraught.

“Notre Dame is burning down, man,” he said to Danno. “Are all your family and friends okay?”

The man was confusing the cathedral in Paris, of course, with Carter’s college alma mater, the University of Notre Dame. But Carter, never one to risk losing a potential audience member, didn’t blink.

“That’s an example of you never know what’s going to get somebody to the show,” he said later. “Then he sat down in the front row, had a drink, fell out of his stool, faceplanted, and left the show.”

“There’s always a side plot going on, which doesn’t happen in most comedy rooms,” Carter said. “The room itself has its own act going on, sometimes on fire, sometimes too drunk. Most people come for the comedy, but my girlfriend comes for the drama —  who is hooking up with who, what comedian is going to go home with which girl.”

Carter says his long term plan is to make it big —  a TV show seems a natural fit, if you’ve witnessed his combination of ukulele skills and well-rounded showmanship —  and to live in Manhattan Beach with his girlfriend and her dog Ninja (“People tell you to get in with a girl’s best friend or her mom, but really the secret is to get in with her dog, and I got in with Ninja —  first time I went to her house, I brought toys and treats”). If everything works out according to plan, he’ll continue doing Pancho’s Comedy Night from here until eternity.

But in the meantime, Carter is burnishing his legacy, with show number 300 slated to be a particularly star-studded affair. He has his own baseball analogy in mind.