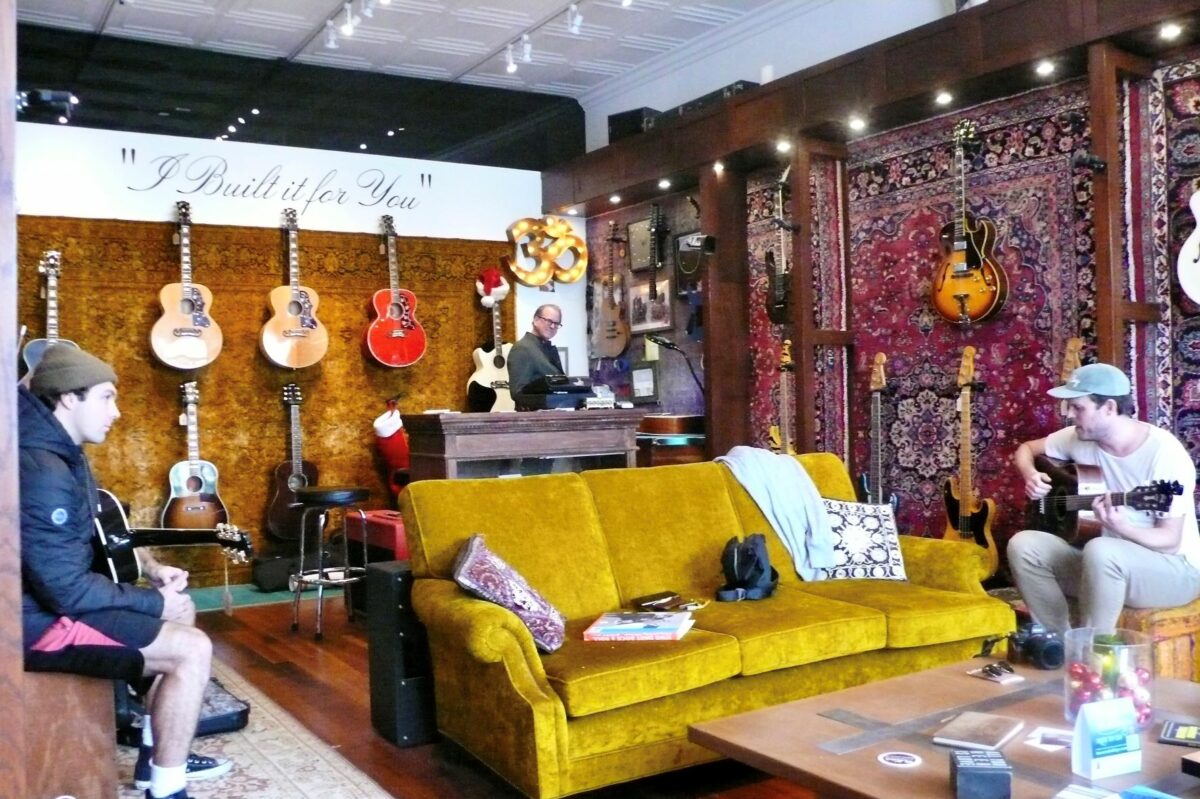 Mike’s Guitar Parlor, at the corner of Pier and Manhattan Avenues, in the old Cafe ‘50s building with the big clock, opened in 2020, after owner Mike Longacre moved from his shop across the street in the Marlin Equity building, which he opened in 2014.

“Their kids took lessons, and most of their people from Chicago were guitar players, too, so I got to make sales to them, which was nice. I was giving the rent to them and then they give it back to me by buying guitars,” Longacre recalled.

Then Marin Equity decided to remodel the building. 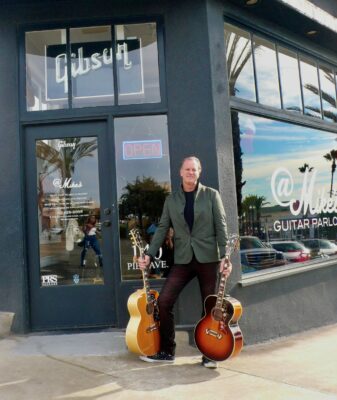 “So I walked across the street and looked at this building and it was just an amazing space,” he said. “I had all my old clients come over to the old store, and we filmed carrying the guitars across the street. Everybody dressed up like the Beatles in Abbey Road.”

“I never looked back. They closed the planet (because of the pandemic), and I did very well. I’m excited to do something special, to give back to the community as much as possible by servicing and custom building guitars. I did custom cars for 20 years with the family business in Hollywood. All the big guitar techs in Hollywood were customers, guys in the Chili Peppers, Jane’s Addiction… it was fun. When my parents retired I built a Formula 1 car in El Segundo and raced cars for a guy for 12 years. Then I built a house in Hermosa and when the house was done I just decided I was tired of wrenches.”

“I ended up going to Gibson and got a dealership with them for four years, and now I’m independent. That’s why you’ll see Jackson’s, Gretsch’s, and Fender products. I build a lot of custom stuff, and  there’s a lot of signed guitars – Kris Kristofferson, Johnny Winter, BB King, Jon Mayer — guitars that were owned by Ratt, Pete Townshend and Buckcherry. It’s really been fun. Who knew that someday I would just get rid of my “stamp” collection basically, and put it all on the wall in a little building.”

Along with selling, making, repairing, customizing and maintaining customers’ guitars, there’s a flourishing community of guitar players that Mike has built at the Guitar Parlor.

“On Sundays I have this little singalong thing. I started it at the first store. I would serve mimosas, and get donuts from this place in Redondo Beach. It’s grown to be a really big community, a free event every Sunday, 11 a.m. to 1 p.m. The place is just full of people. I sing songs, and people join in and sing. it’s really fun, stop in.”