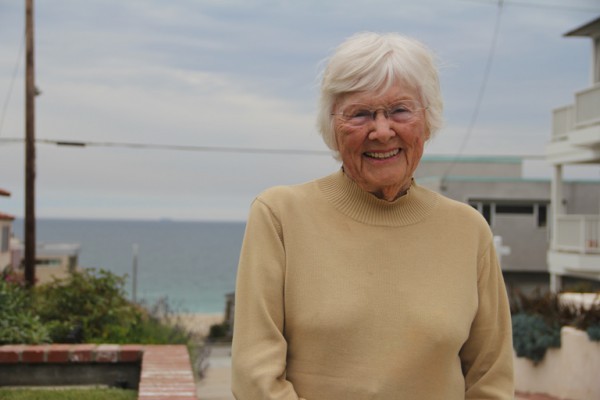 Lifelong Manhattan Beach resident Evelyn Frey, 98, has been lobbying for an ADA-accessible, senior-friendly concrete beach walkway, proposed nearly seven years ago. She will finally get her wish before Memorial Day. Photo by Alene Tchekmedyian

After nearly seven years from the time it was first proposed, a concrete walkway stretching out to the beach made the shortlist of capital improvement projects approved for funding by the Manhattan Beach City Council this year.

Pathway to Sea, a 70-foot-long and 7-foot-wide cul de sac to be installed from a bike path in El Porto, is expected to be built by Memorial Day. It was originally conceived by lifelong resident Evelyn Frey, who is now 98. Following an unsuccessful trudge through the sand to reach the water, she began lobbying for what she believed was a simple project that would benefit many.

“I live two blocks from the beach and I can’t go down to the ocean,” said Frey, who resides on Third Street and Highland Avenue. “I’m not handicapped. I’m doing everything myself, but I can’t go down to the water. That’s how it all started. I thought, ‘What a shame. There must be other people like me.’ I thought at the time it was a product with a simple answer and it could be done overnight.”

Frey believed she had won the battle in April of 2012 when the City Council voted 4-1 to approve the $50,000 walkway along with a coastal permit. It was to be installed next to an ADA accessible ramp near 42nd Street and extend about 150 feet from the high tide line. But nearly two years crept by, and she was still waiting.

“From then on, they were just playing kickball with it,” Frey said.

On Feb. 25, the City Council appropriated $5.8 million from the city’s operating budget to begin the undertaking of 12 infrastructural projects, including Pathway to Sea. Every year, the city presents a revised five-year Capital Improvement Plan, a framework of the city’s capital infrastructure needs that include renovations, replacements and new projects. 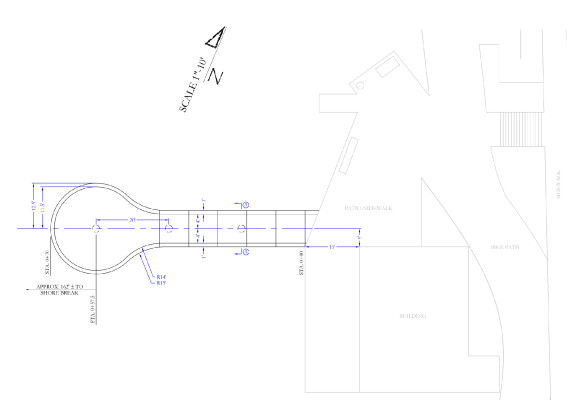 The pathway will resemble a cul de sac that stretches 70 feet from the bike path near 42nd Street. Courtesy of Manhattan Beach Public Works

Tony Olmos, the city’s public works director, attributed the delay for the pathway to permitting challenges. Because beaches are owned by the County, the staff had to draft a Memorandum of Understanding to be approved by the County’s Department of Beaches and Harbor. It was submitted and approved in January, Olmos said.

This project will funded by the city’s local return from Measure R, a ballot measure passed by voters in 2008 to fund transportation projects and capital improvement.

From here on out, the process to build Pathway to Sea will be “on an aggressive schedule,” Olmos said. By the first week of May, the City Council should award the bid to a contractor, who will also take on the annual sidewalk project, which constitutes repairing concrete walkways around town.

Among other projects scheduled to be completed before this summer are a new set of crash-rated bollards at the pier, approved for $100,000. This proposal follows an incident in November of 2012 when a car lost its brakes and careened down to the pier, crashing through the bollards and injuring five people in the process.

“The ones out there now are not engineered to absorb a lot of energy,” Olmos told the Council at the Feb. 25 meeting.

Another capital improvement project anticipated to be completed before summer is the installment of flashing beacons along the bike path at the pier. The city has allocated $40,000 to this undertaking, which will be paired with new striping and signage on the path.

Other projects approved for funding by the Council include a water main replacement for $700,000; an emergency water generator replacement for $100,000; intersection improvements on Sepulveda Boulevard and 8th Street for $248,000 (a federal Highway Safety Improvement Program provides $223,800 in grants); pedestrian improvements at 22 intersections for $248,600 ($223,700 in federal funds); a storm water cover for the city’s maintenance yard for an additional $200,000, as well as a required update to the city’s pavement management system for $40,000.

The City Council’s unanimous motion on Feb. 25 also allocated $3.6 million as another installment of funding for the Sepulveda Bridge Widening project.

With regard to Pathway to Sea, Mayor Amy Howorth called the final approval for funding “a long time coming.”

“it’s gonna mean a lot to a lot of people,” Howorth said.