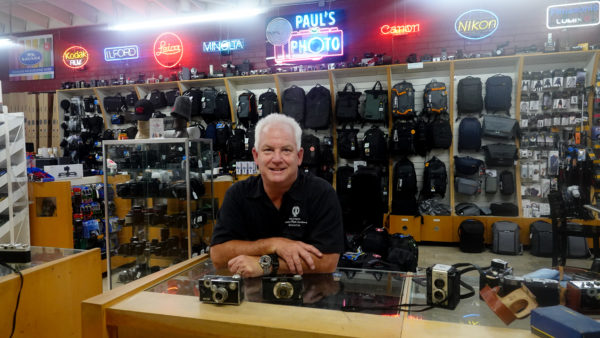 Mark Comon behind the counter at Paul’s Photo. By Jefferson Graham

When the COVID crisis started, Paul’s Photo owner Mark Comon wondered how he would be able to continue paying his 20 employees, and keep in contact with his 15,000 customers.

“We’re going to have to close down,” he thought at one point.

Then, as someone who spends a good deal of time around cameras tends to do, he turned to photography. One way to deal with the crisis and all those hours at home was to be creative, he thought.

He began filming one to two minute “Be Creative” tutorials on everything from how to photograph fruit to getting great shots on a bike ride.

And he’s kept it going for nearly 150 days and counting. With no plans to turn back.

“I was scared,” he says. “My customers were scared. My team was scared.”

But the series has paid off. Both in sales — people come to the store to buy gear based on his tutorials — and in phone calls and social media callouts, from all over the globe.

Plus, it kept the store alive during these challenging times that saw business off 75 percent in March and April, but down only 25 percent today.

Based on the endless enthusiasm from the Cal Worthington of camera dealers. Mark Comon will urge you to come on down to Paul’s and see the latest. The difference between him and a TV huckster — he’s also a master photographer.

Take a look at some of his excellently composed and exposed photos of the San Pedro Vincent Thomas Bridge or night skies out in the desert on his Paul’s Creative Photo Academy website. That focus on learning could be Comon’s secret to keeping the store alive at a time when the neighborhood camera store isn’t as common a site as it once was.

Erin Manning, a local photographer, educator and longtime customer, says Comon’s secret is in the training. “He knows that education is important,” and that it pays off with higher sales and repeat customers.

Linda O’Rourke, who has been attending Comon’s classes for 10 years, says it’s Comon’s “enthusiasm,” for the subject that resonates. “He just tells it like it is.” 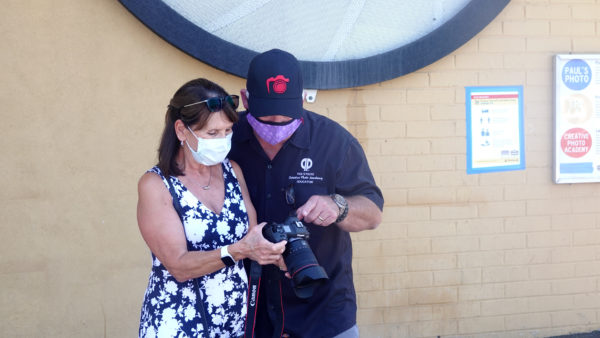 Comon, 60, has been at it since 1974 at age 14, when he started helping his dad Paul) at the family camera store, which has been open since 1961. (It’s in its third Hawthorne Blvd. location). Mark has three sisters who aren’t involved in the family business. Dad, now 89, is happily retired and no longer involved with the store, which he handed down to Mark and wife Sheryl in 2011.

Comon took a few years off for college, at El Camino and Long Beach State, and thought about doing something different, but the store won his heart.

“I was thinking about other careers,” he says. “I had thought about being a doctor, or joining the AirForce. I just decided that stuff really wasn’t me. This is what I wanted to do because I loved it. It was fun. It was exciting.”

Photography is “something I can share with people,” he adds. “I think I’m good at helping you get the right camera, learn how to use it and get the pictures you want.”

And dare we say, “be creative?”

Hs Facebook page reads: “Family and photo are my love. Creativity and sharing are my life.”

Sheryl, who photographs the social media videos on their iPhone while her husband waves his arms and urges people to get up and start doing fun stuff with their cameras, is amused to see how “Be Creative,” took off.

“He started it because we were bored and had so much free time,” she notes. “I’m not really sure what the stronger passion is, teaching people or being a photographer himself. It’s all about giving people a creative outlet.” 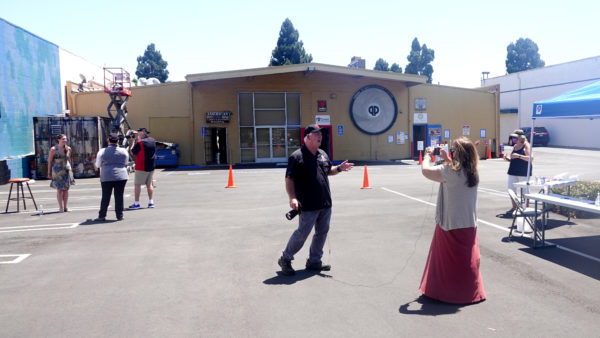 Paul’s Photo owner Mark Comon records a video with wife Sheryl behind the camera, at a Canon event at the store

Through the years, Comon has expanded Paul’s purview, not just with the Creative Photo Academy, but also adding an in-house photo lab to process film and digitize old home movies. (Yes, he says, people are still bringing in film to develop.)

The Lab and Academy represent 20 percent of his business, while camera sales still account for 80 percent.

Sure, the online e-tail business has changed everything for struggling retailers, but unlike, books, which Amazon heavily discounts, making it hard for brick and mortar retailers to compete, cameras and most electronics have standardized prices.

A Canon 5D IV camera sells for $2,499 on Amazon and at Paul’s. A Rode Go Wireless microphone setup is $199 at both locations.

“The margins are very low but the prices are stable and everybody charges sales tax now, so there’s no reason why you shouldn’t come here,” he says.

Still, many camera stores have shuttered their doors — L.A.’s Bel-Air Camera and Calumet are long gone, victims of online competition. Silvio’s Photoworks, on Hawthorne, just north of Paul’s and Samy’s chain of camera stores are among the few survivors. 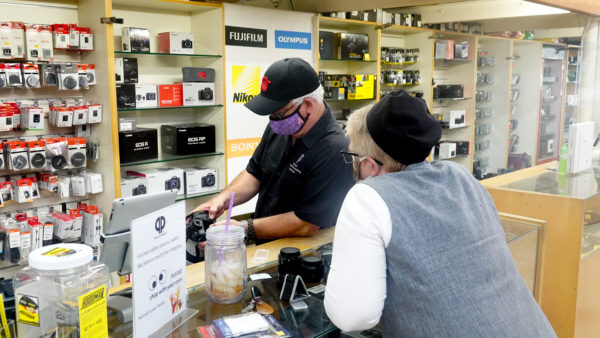 Mark Comon works with a customer at Paul’s Photo

“Personalized service, trade-ins, advice,” he says. “We get you hooked up properly.”

“We’re hoping more people start to realize that shopping online is not the best thing for our community. Going to a local store is a benefit.”

It’s the small business that helps fund the schools, police and fire department, he notes. “If you want them, you need to support your small business because that’s who supplies the sales tax revenue.” The classes, which Comon teaches four times a week, have shifted to online, and the tours he had planned to exotic places like Scotland, Italy, Cuba and Africa, are canceled, at least for 2020. 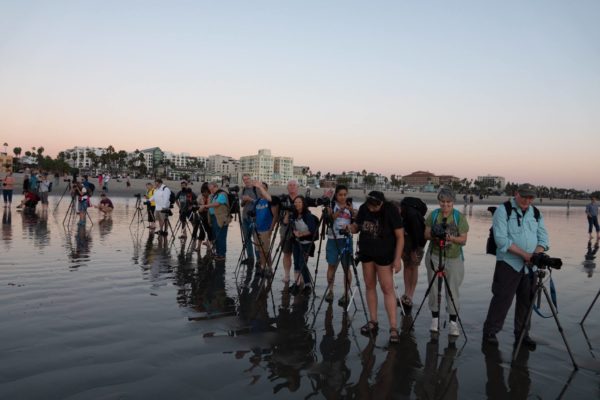 The good news is he’s getting better attendance with the online classes, and gaining customers and instructors from all over the world, people who learn what he’s doing with the “Be Creative” series.

His social media activities revolve around Facebook, YouTube, Instagram and LinkedIn, but he says he gets far and away the most response on the social network.

“Mark has really stepped up to the next level,” with the video series,” says O’Rourke. “He just has so much energy and enthusiasm and so much to give.” 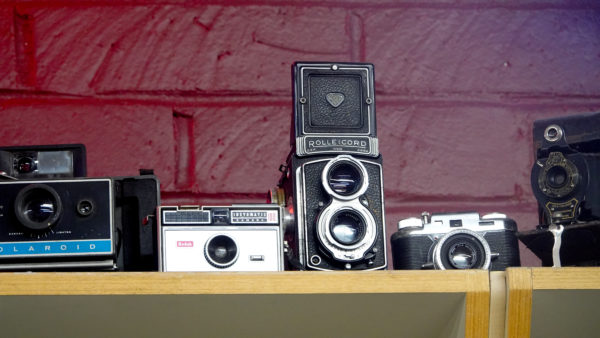 Comon isn’t sure where he’ll be in 20 years, but odds are, a Comon will not be running Paul’s Photo.

Mark and Sheryl have three kids, ages 32, 30 and 26 and none of whom have expressed interest in taking over the store. Son Wyatt, 26, says the next generation spent so many years being photographed that it turned them off to photography. “None of us are photographers,” he says. “We don’t even have cameras.”

Mom isn’t upset about how things turned out. “They’re all doing great, and that’s what matters,” she says.

For small business owners who wonder how to replicate Comon’s success with social media, we asked him for his top five tips:

Be Active: The more you post, the more people will see your message.

Educate and inspire: Have something to say. Show people something they didn’t know, or could know better.

Have a message: For Comon, it’s shop local, or Be Creative.

Be consistent: Commit to a schedule. If you say you’re going to post three times a week, stick to it. 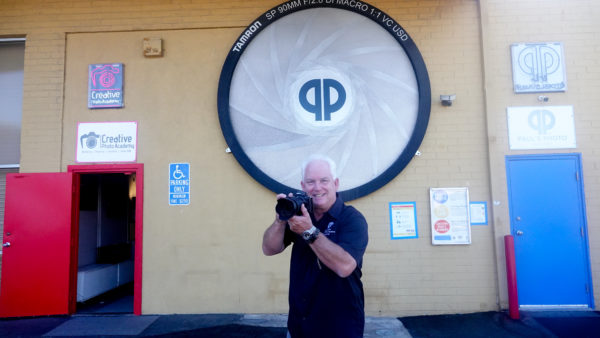 Mark Comon in the back of Paul’s Photo in Torrance