The Phantom of Redondo Union 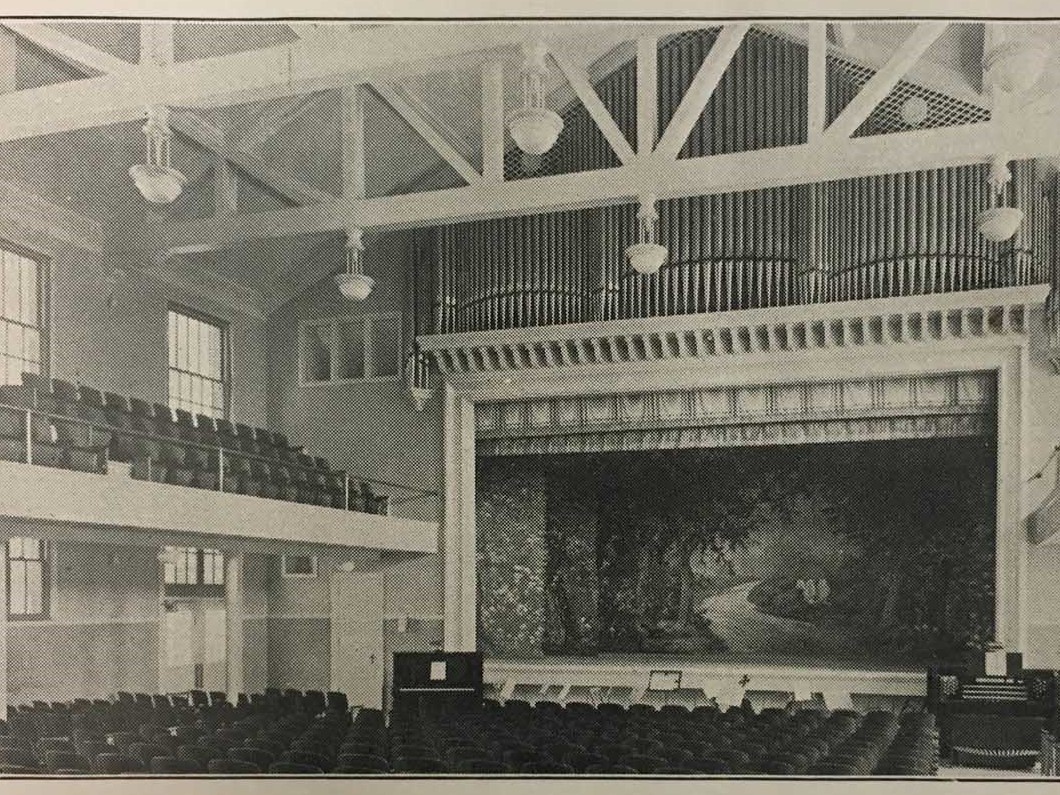 Redondo Union High School’s Old Auditorium, circa 1916. The then newly-installed pipe organ can be seen above the stage, rising toward the ceiling. Photo courtesy RUHS Archives

Redondo Union High School’s 101-year-old pipe organ was among the first of its kind when installed. But as years pass, the instrument gathers dust in the auditorium’s walls.

The first time Walter “Skip” Kennon played the Redondo Union High School pipe organ in the 19, it was as if magic was flowing through his fingertips.

“I remember turning it on, and hearing the sound of the blowers, the compressors,” Kennon said. He played a few notes, and then a few more, and gradually the sound grew and grew. “The pipe organ felt powerful — to be able to make that much sound without that much effort…I felt like a wizard.”

The then-50-year-old organ’s three-manual keyboard console sat to the right of the stage in the school’s old auditorium. The pipes rose above the stage to the old, wood building’s arched ceiling, supported by joists of Californian sequoia. And on that day, the console had been left unlocked.

Kennon was a promising musical talent, but he didn’t have permission to play the organ.

Before long, a school janitor heard him. He compliment Kennon on his playing but said he would still have to report him to the principal.

“You’re not supposed to do that without permission. So I’m going to give you permission,” Kennon recalled the principal telling him.

Kennon’s musical passions drove him to New York, where he became a celebrated composer of musicals. His one-man musical “Herringbone” was performed by Cabaret star Joel Grey at the Edinburgh Festival. During the high school’s 2005 centennial celebration, Kennon was recognized as one of the school’s 100 distinguished alumni. 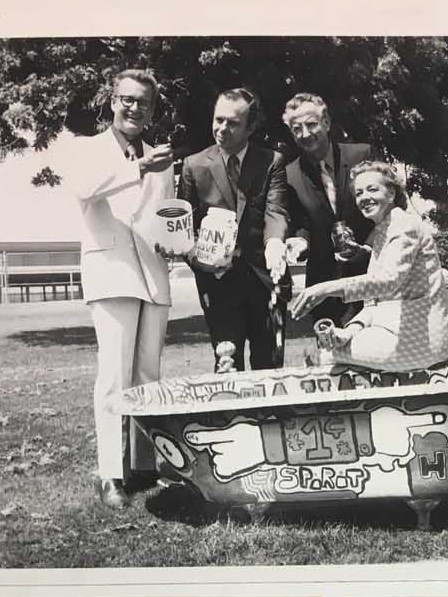 The school organ did not fare so well. After the old auditorium was torn down in the early 1970s, students and residents held fundraisers to pay for the organ to be installed in the new auditorium. But instead of the nearly 800 tapered pipes towering over the stage, they were hidden in chambers on either side, accessible only by a catwalk. The grand console was also out of sight, in the orchestra pit.

Today, the pipe chambers are storage for the drama department and the keyboard console is stored in the district’s old bus depot.

Bob McDonald discovered the pipe organ shortly after being hired as the Redondo Union High auditorium manager two years ago.

“What we have are the pipes, the blowers, the motors — everything’s there, all put away. It’s not just rotting,” he said. “When I discovered it, I just thought we should do something with this.”

McDonald has called organ builders — some world-renowned, some locally-based — but has been unable to enlist help in rebuilding the 101-year-old organ.

The Redondo Union pipe organ was built by the California Organ Company, a successor to the Murray M. Harris Organ Company. In 1904, the Harris Company built what was then the world’s largest pipe organ for that year’s Louisiana Exposition.

The Los Angeles Times reported that Redondo’s new auditorium was to be the center of biweekly social functions “for the betterment of the community.” The pipe organ and a film projector were to “bring the people of the district closer together and closer in touch with the school,” school board clerk G.S. Thatcher told the Times.

Organ music, according to the Reflex, was “one of the most efficient methods of counteracting the present deplorable and deplored tendency of the young mind to care only for the lighter in music.”

“The fact that…’organ music’ was almost synonymous with ‘church’ music is a matter for great regret. But that is today a thing of the past,” the Reflex article said.

Students were offered organ instruction through at least 1957, based on RUHS yearbook references.

In 1968, in anticipation of the old auditorium being torn down, a “Save the Pipe Organ” fund was established by the Associated Students Body and the RUHS Parent Teacher Association. An old, clawfoot bathtub was given a psychedelic paint job and wheels. The goal was to fill it with one million pennies, or $10,000.

“We took it all over town, to the Riviera Village, on school parades,” said Terry Martinez, a Class of 1971 graduate and former teacher in Redondo and Hermosa. Martinez is currently the school’s archivist and has been involved in multiple attempts to save the organ.

PTA minutes show that the 1968 drive began in November with a kick-off dinner that netted $400. Another collection was taken during a Nov. 1969 basketball game between the Los Angeles Lakers and the Cincinnati Royals at The Forum. Among the school’s archives are binders filled with news clippings and fundraising flyers.

By 1971, the “Save the Organ Fund” had collected $7,500. The school board approved spending another $2,500 to have the organ installed in the new auditorium. But with the organ no longer visible, interest in it waned.

In 1998, after prompting from Martinez, Betty Noble donated $4,000 to the school in honor of her late husband and real estate mogul Joe Noble, according to a Daily Breeze article. The gift was to restore the organ. By then it had been a decade since the organ had been used in a public performance and no major maintenance work on the organ had been done since 1985. It’s sat mostly dormant ever since. 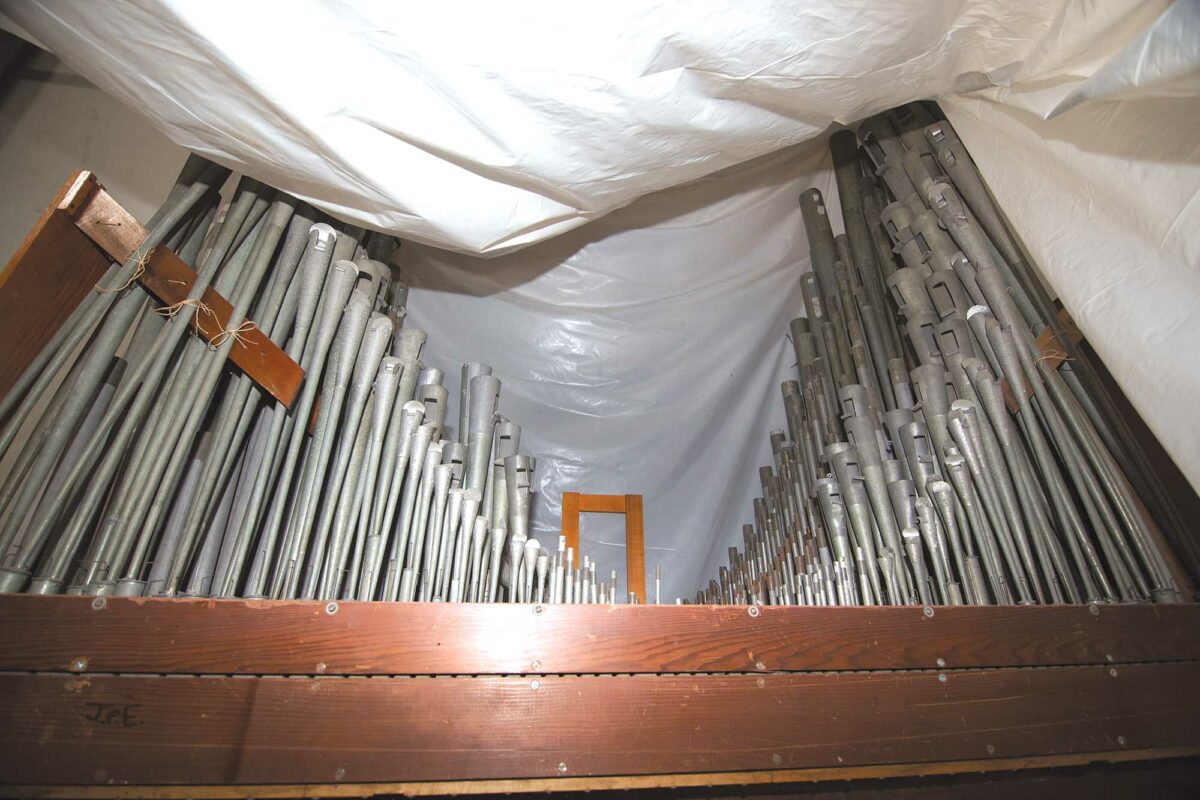 The pipes for RUHS’s organ lay covered and hidden in chambers accessible only from ladders on either side of the stage. The higher-voiced pipes, pictured here, are at stage right. Photo

“My first thought was that it was never going to play again,” Rosales said. “If it had never been tampered with and just needed a cleaning, all that old wire could stay in place. As long as it’s not tampered with, code allows you to ignore it,” The wiring is the biggest problem, he said. All of the wiring would need to be replaced to bring it up to code. The leathers that work the organ valves, bellows and hinges all need replacing, as well. Retrofitting would be required to meet earthquake codes, and – of course – the pipes need to be cleaned.

The other problem, Morales said, is that the organ was poorly installed.

“As soon as someone starts moving the wires around, they risk producing short circuits and other electrical problems,” Rosales said.

Restoring the organ to what Rosales calls “first-class shape,” could cost as much as $450,000. “It can be done for less, but…if we just bought a console and hooked it up to the organ the way it is, it wouldn’t play well.”

The organ’s most recent keyboard console is intact, however. According to Fred Naile, the district’s director of facilities and maintenance, it was moved to the RUHS bus depot around 2010, when the auditorium was remodeled. Its old wires are still visible in the orchestra pit.

The original console briefly resurfaced about a decade ago when a local furniture refinishing shop, The Strip Joint, offered it to the RUHS archives. “But there was no place to put it when I had the chance,” Martinez said. A manager of The Strip Joint, which has since moved from its location on Catalina Avenue to Normandie Avenue in Torrance, said that they don’t recall the organ console — it had been about 10 years, after all. 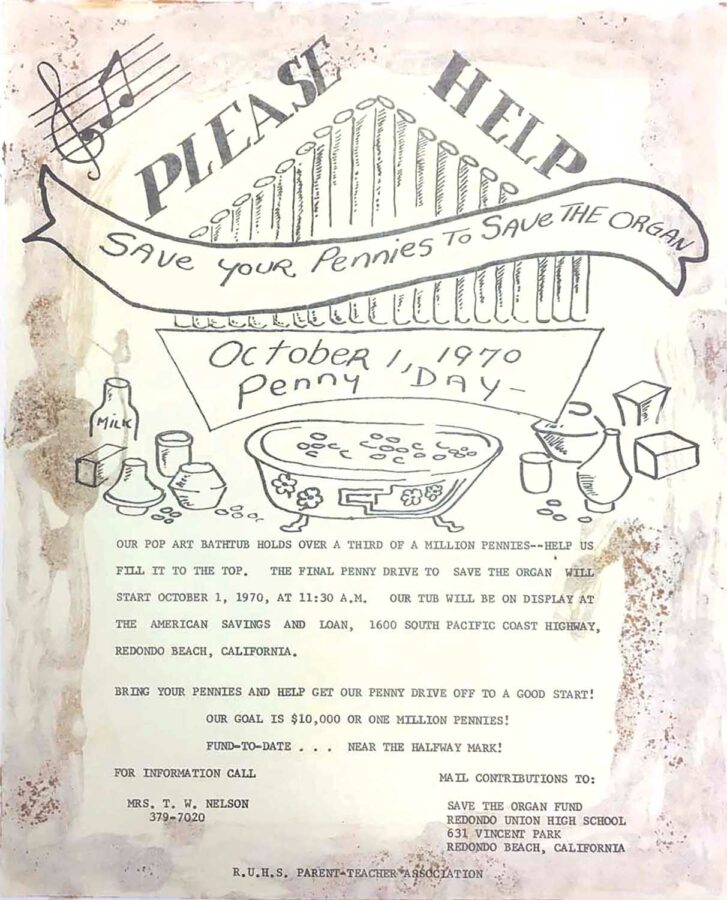 Organ restorations are not unheard of. In 2015, Whittier High School installed a Wurlitzer organ that was acquired by the school’s Alumni Association 10 years earlier. According to the Whittier Daily News, that organ required $150,000 worth of repairs, not including the cost of adding air conditioning to the building.

“It definitely would increase the attractiveness [of the auditorium],” said RBUSD School Board President Brad Waller, who learned of the organ through his daughter, who was part of the school’s theater arts tech crew. “Adding a pipe organ…there are no other [high school] pipe organs anywhere around, I can think of. If someone wanted to play one, it’s us or maybe a church.”

There’s also precedent for restoration projects at RUHS. The school’s old custodian building was modernized just this year as an Alumni House, curated by Martinez. It showcases items from throughout the school’s 112-year history. That movement was sponsored by a foundation created specifically for the renovation and helped by South Bay nonprofit Sharefest Community Development.

But according to Assistant Superintendent Janet Redella, the organ’s future may depend on its utility.

“Students are not as interested in playing the organ, and I don’t know what the audience is like…it’s a program question, and would depend on if there’s a need to restore it,” Redella said. “We’re all into restoring old things, but we don’t want it restored and not have it cared for and used.”

McDonald said the organ would be perfect for RUHS theatre productions such as “The Phantom of the Opera.”

“It would be nice to use these rooms for more than just storage,” McDonald said as he looked at a rack of audio cables in the stage right pipe chamber.

For Martinez, who has assembled informational pamphlets about the instrument, restoring the organ would be the culmination of her attempts to bring the organ back to life, dating back five decades.

“I’ve had a secret dream of having [the late] Ray Manzarek of The Doors play that organ. I always thought I could sell that out,” Martinez said. “It’s such a cool place up there, and you can just feel the history, and what’s gone through those pipes, the hundreds of people who have put their hands on the consoles and made music.”