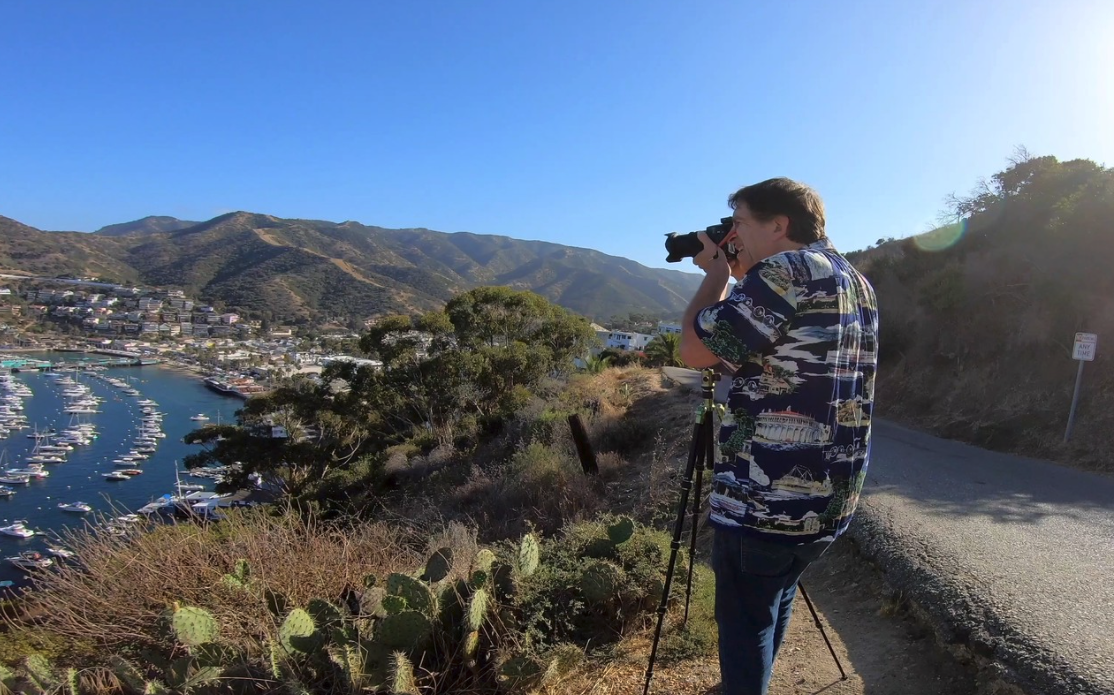 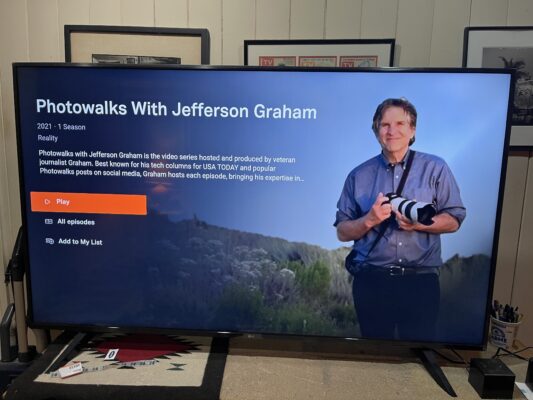 My travel photography series Photowalks just debuted on Tubi, the free TV streaming app. In the series, first hatched in Manhattan Beach from my garage, I set out to bring viewers with me to great places and show them how to get postcard-perfect photos.

How many times do we travel and complain that our photos don’t look anywhere as great as the postcard image the local tourism boards show us? I can help with that.

The first six episodes of Photowalks are set on the Oregon Coast, the Big Island of Hawaii, Portugal, Los Angeles, Morro Bay and Catalina and Balboa Islands.

The series began in 2019 as a YouTube series, but it’s been a long dream of mine to have the show available to TV viewers, on streaming, so I’m thrilled we’re now on Tubi, as well as Google Play, Comcast and Cox video-on-demand.

I got the idea for the show while visiting Japan, where things were really as wild and electric as you’ve probably heard in in Tokyo, at Shibuya Square, and in Osaka, in the Dotonbori district, I had to capture it all with my camera and make a travel video.

I showed the video to my friend Bill Weiner, and while he liked it, he told me it was wanting.

“But where are the photo tips? Anyone can do a travel video. But if you do it, we expect to hear tips on how to get great photos with our smartphones.”

I took Bill’s suggestion to heart, and realized he had justification for the comments. I was the author of “Video Nation: A DIY Guide to Planning, Shooting and Sharing Great Video,” I had taught video classes, and had done zillions of articles and videos for USA TODAY about how to get better photos with your smartphone.

Another friend, Xavier in Spain, had asked me about visiting L.A., and where he should go. Like many overseas travelers, he had an ambitious schedule that would knock most of us out. He wanted to do L.A., Malibu, the South Bay, Disneyland, Las Vegas, Zion National Park and the Grand Canyon, plus San Francisco in about 2 weeks.

I wondered if I couldn’t do a series aimed at someone like Xavier, showcasing the best spots to visit while here, and thus making his planning easier. And throw in photo tips for Bill.

So I grabbed another friend, Tony Prince, and asked him to join me at the Hollywood Walk of Fame to try a travel video with photo tips.

We spent the day in Hollywood exploring and had a total blast. After years of making tech reviews for USA TODAY, I was hooked.

So from Hollywood, I did short episodes on Hermosa, Manhattan and Redondo, Palos Verdes, all the Orange County beach cities (Laguna, Huntington and Newport, Dana Point) some inland (Riverside and Orange), Las Vegas and Toluca Lake, as well as Pismo Beach.

Then in 2020, my friend Alex Kruglov, who founded the social app Pop.in, suggested I meet up with Peter Spirer, who runs the Rugged Entertainment production company. I’ll be indebted to Alex forever for this! 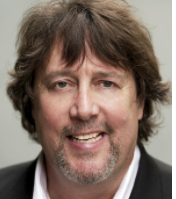 Peter liked what he saw, and was interested in Photowalks, but as a full-length TV series.

I was all in. And so we went to work together on expanding some of the earlier episodes with additional footage, and creating new ones. We ended up with 6 half-hour episodes, which hopefully will find an audience. If people like it, we’ll get to do more. So please watch.

As I started making episodes, it dawned on me that fun of these travel shows was including the voices of locals, instead of just the guy who helicopters in for a day or two. I made a cold call to a photographer named Charlotte “Ginger” DiNunzio and she agreed to meet me in Morro Bay and Cayucos. Jennifer Little, who did publicity for Morro, hooked me up with Bailey Christenson, who gave us a tour of the waters from an electric boat. The great photographer Jose Manuel Santos accompanied me on the back streets of Porto, Portugal. Kristin Metcalfe brought me to the “best sunset” spot on Catalina Island. Susan Dimock showed me how to photograph Face Rock and other icons of Bandon, Oregon., while Sharon Biddinger and Janell Goplen showed us around Newport Oregon.

My son Sam designed the logo for the show. My brother Jez did much of the music, along with Peter Spirer and my guitar teacher Paul Ellis. My wife Ruth held the camera for several key shots in Oregon and Portugal. Dean Robaina helped out with sound mixing. Jan Schrieber took the cover art for the series and designed the awesome poster.

After we wrapped production, I got an opportunity to leave USA TODAY after a three-decade career (it’s called a buyout) which timed perfectly with the launch of Photowalks. So now it’s all photos, video and blogging for me.

Meanwhile, it’s great to be outdoors, and out of the car, with someone who knows the area, because when you’re in a drive-by, you miss so much. Plus, my friend Bill was onto something. Traditional travel shows wow you with beautiful pictures of places you’ll want to visit, but never slow down and show you how you got them. And because I’ve spent so many years reporting about smartphone technology, I could show you how to get those shots, without spending a fortune on camera gear, with an average smartphone.

For instance, take a look at this photo of a Southwest airplane heading towards LAX in Westchester. Shot on an iPhone!

Here are more examples of what you can do with your smartphone for photography:

And what exactly is Tubi?

Tubi is a free TV streaming service that’s available wherever you stream: Amazon Fire TV, Apple TV, Roku, Google Chromecast, smart TVs from Sony, Samsung and Vizio and Comcast video on demand. If you don’t have it already, just download the app via your streaming player.

I hope you’ll tune in to the show and check it out. Please let me know what you think!

You can reach me via my newsletter: http://jeffersongraham.substack.com