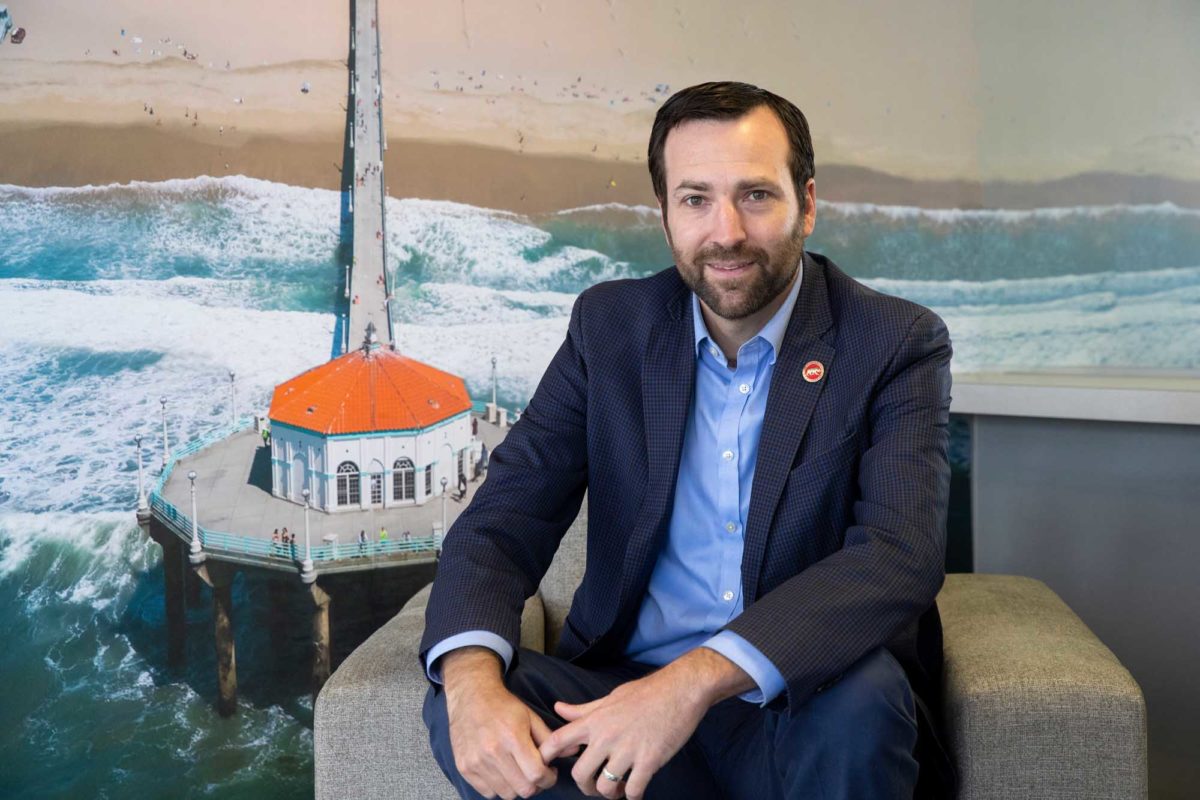 South Bay State Senator Ben Allen has authored a bill that would prohibit the sale of plastic water bottles by 2030. Photo by Brad Jacobson (CivicCouch.com)

A bill authored by state Senator Ben Allen (D-Santa Monica) that would phase out the manufacture and sale of single-use plastics in California by 2030 was passed by the State Senate and is now under review by the State Assembly. If approved by the Assembly, it will go to Governor Gavin Newson for his signature.

“The dire impacts of single-use plastic on our oceans, marine life, the broader environment, and human health are too powerful to ignore. Local cities are forced to spend millions of taxpayer dollars on waste management and cleanup that should be spent on other essential services. I thank my colleagues for recognizing the need to address the plastics crisis by passing SB 54,”  Allen said.

According to Allen, whose 26th District stretches from Palos Verdes to Santa Monica, less than 15 percent of single-use plastic in California is recycled. The plastic that is recycled is worth less than the recycling costs. Cleaning up California’s plastic pollution could cost $2 billion a year.

The problem with plastic pollution, Allen said, has been compounded by China’s 2017 National Sword policy, under which China has stopped accepting recyclable waste. As a result, plastic waste previously sold to China now piles up in recycling centers or is sent to landfills or illegal incineration facilities in Southeast Asia.

Also known as the “California Circular Economy and Plastic Pollution Reduction Act,” SB 54 would dramatically reduce the manufacturing and sale of single-use plastic and require what is allowed to be recyclable or compostable by 75 percent by 2030.

Allen traces his concerns about plastic pollution to having spent countless days at the beach as a child growing up in Santa Monica.

“I think we’ve all seen the startling increase in the amount of trash, especially plastics, that have marred our ocean environment,” Allen said in a recent interview.

“We can’t keep ignoring the public health threat posed by mounting plastic waste. Everyday Californians generate tons of non-recyclable, non-compostable waste that clog landfills, rivers, and beaches. The waste is often broken down into toxic chemicals — some of them cancer-causing — that find their way into our food and water systems. Rather than continue to tinker around the edges with one-off bans of individual plastic items, we need a comprehensive solution.”

Allen said roughly two-thirds of all plastic ever produced remains in the environment. Plastic fragments into small particles, known as microplastics. Microplastics have been found in tap water, bottled water, table salt, fish, shellfish and agricultural soils. Exposure to these plastics and associated toxins has been linked to cancer, birth defects, impaired immunity, endocrine disruption, and other serious ailments.

Allen’s bill was joined by a companion bill in the State Assembly. Assembly Bill 1080 was authored by Assemblywoman Lorena Gonzalez (D- San Diego) and it too was approved by that house this week.

“We have to stop treating our oceans and planet like a dumpster,” Gonzalez said. “Any fifth grader can tell you that our addiction to single-use plastics is killing our ecosystems. We have technology and innovation to improve how we reduce and recycle plastic packaging and products in our state. Now, we have to find the political will to do so.”

Both bills will now go before Gov. Gavin Newsom for consideration later this year.

Both pieces of legislation have been opposed by the California Chamber of Commerce who called them “job killers.”

A chamber spokesman said the bills contain language that is “unclear and vague,” and that it establishes deadlines that are not practical. Finally, the chamber says it is worried the legislation provides CalRecycle, the state’s recycling authority, with too much power over the plastics industry.

“SB 54 aims to establish a comprehensive framework to address the pollution and waste crisis,” a Surfrider press statement said.

Plastic pollution has grown into a major global crisis for the oceans, with an estimated 17.6 billion pounds of the material entering the marine environment from land-based sources every year. Taxpayers and local governments spend more than $420 million annually to clean up and prevent litter in streets, storm drains, parks and waterways, but these efforts cannot keep pace with the production of single-use disposable items.

“Solving the plastics problem in our oceans will take a concerted effort by the companies that are producing and selling these materials,” said Geoff Shester, California campaign director and senior scientist at Oceana, a leading proponent of SB 54. “This legislation will create the framework desperately needed to turn the tide on our single-use plastics problem.”

The bills mirror the European Union Directive on plastic, which takes a comprehensive approach instead of passing bans on individual plastic items.

“Without action, (the amount of) plastic in the ocean will exceed (the amount of) fish by 2050,” Allen said noting that a study by the University of Exeter and Plymouth Marine Laboratory in the United Kingdom found plastics in the gut of every single sea turtle examined and in 90 percent of seabirds.

“We all have to ask ourselves is this the legacy we want to leave for our children,” Allen said.