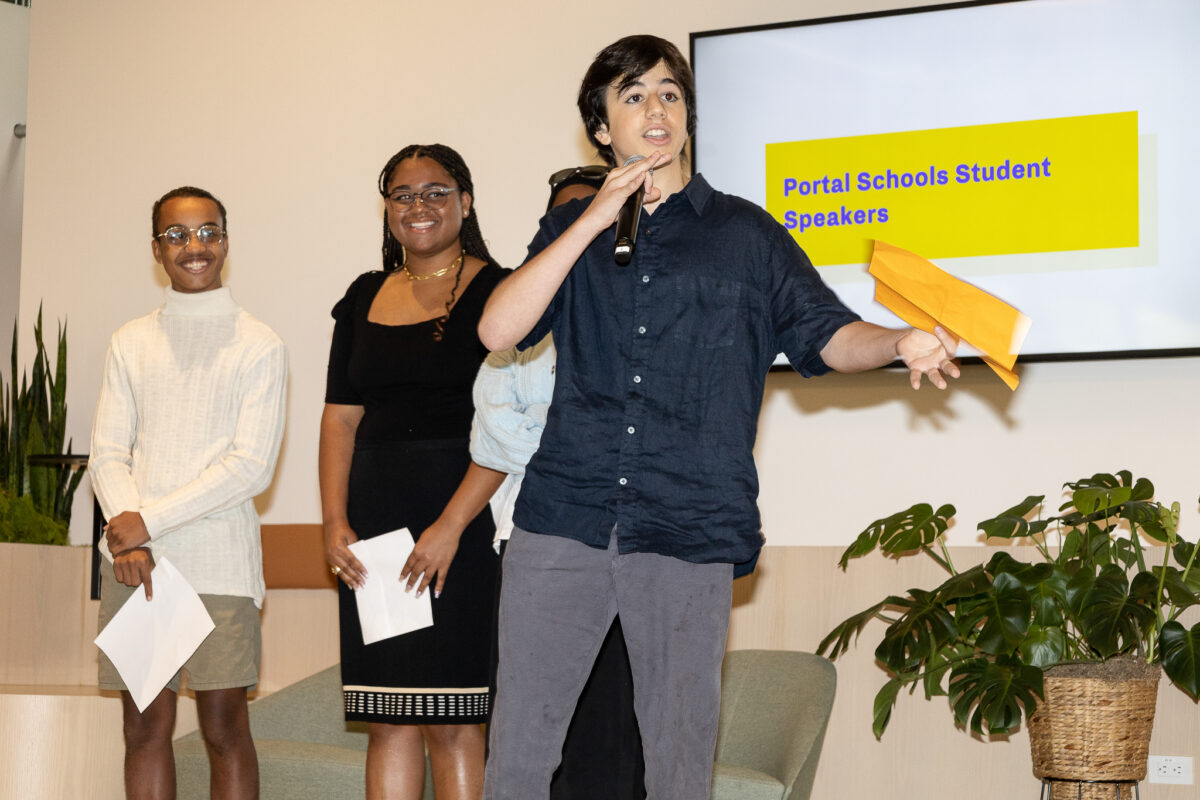 Portal Schools student Milo expresses his appreciation for his school in a rap. Photo by Kevin Cody

Portal Schools, a self identified disrupter of traditional high school education, found itself the target of disruptive thinking during an otherwise traditional ribbon cutting at its new campus in El Segundo last week.

The school’s motto is “High School done Differently.” Its campus is at the corporate headquarters of Belkin, whose ubiquitous computer accessories range from data cables to home automation devices.

The corporate location is fundamental to the Portal’s goal of preparing students for the workforce.

“Too often, students leave high school and college lacking the knowledge and skills required to transition to the workforce,” Portal’s website notes.

To facilitate that transition, the school’s 60 students are each assigned a Belkin employee as a mentor. 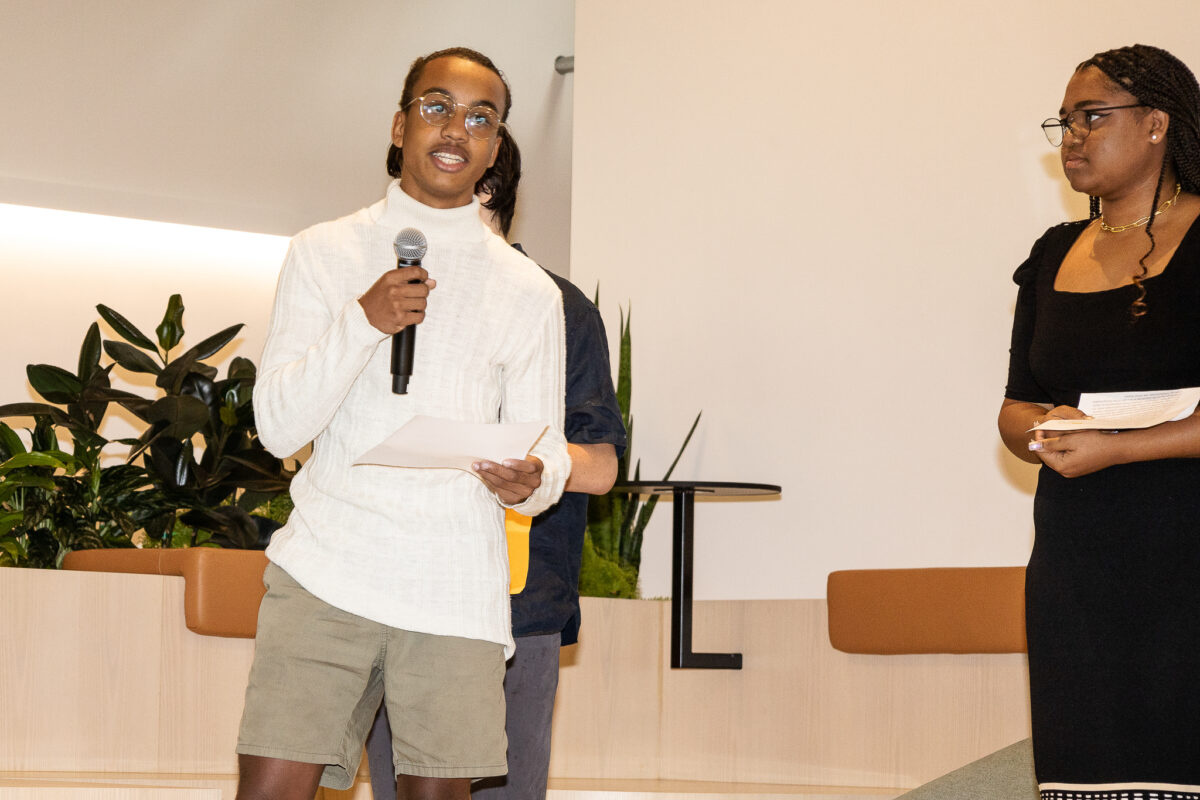 Portal Schools student Mokai tells of the opportunities the school has given him to meet business leaders. Photo by Kevin Cody

But of the four students who addressed business leaders attending the ribbon cutting, including Pat Clark, of the Los Angeles Chamber of Commerce, only one expressed an interest in a business career.

The final student speaker described his ambition in a rap:

Portal will accomplish my goal

a director, producer, cast a role

Sorry if this was a bit offbeat

Thanks, now I’ll take my seat

His rap was interrupted by a classmate, who  in flash mob style, leapt from the audience to declare:

Portal has started the fire

It is ever burnin’ and we are learnin’

Portal has started the fire

Together with Belkin, everyone’s welcome 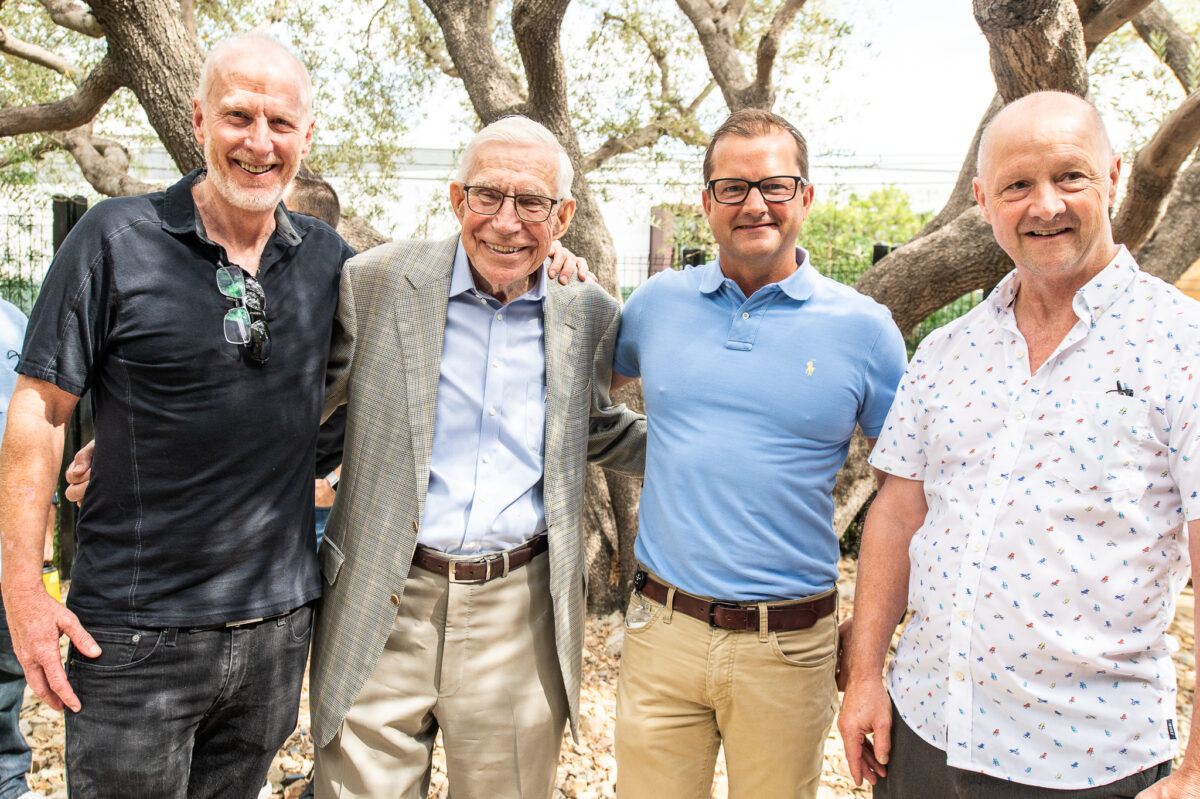 Portal co-founder Chet Pipkin, of Manhattan Beach, who was in the audience, must have been pleased.

“I wanted to start a business. But I was told, ‘No, no. First you have to follow the education track,’” Pipken recalled in an Easy Reader interview in 2021, the year the school opened at Belkin’s previous headquarters, in Playa Vista.

“But what if we made school a truly immersive space, where students were exposed to real world experiences, while getting an education,” he said.

Pipkin dropped out of UCLA after two quarters because he saw a need to connect Apple computers to non Apple Printers. He began making printer cables in his parents’ Hawthorne garage in 1983. In 2018, he sold the company for close to $1 billion to Taiwan-based electronics giant FoxConn.

Fortunately for the students who spoke at the ribbon cutting, Belkin is sufficiently wide ranging to have employee mentors for aspiring actors, writers, and directors, as well as future titans of industry.

Michael Keegan, a former Hermosa Beach council member, said at the ribbon cutting that his daughter wants to study art, and is being mentored by a Belkin graphic designer. 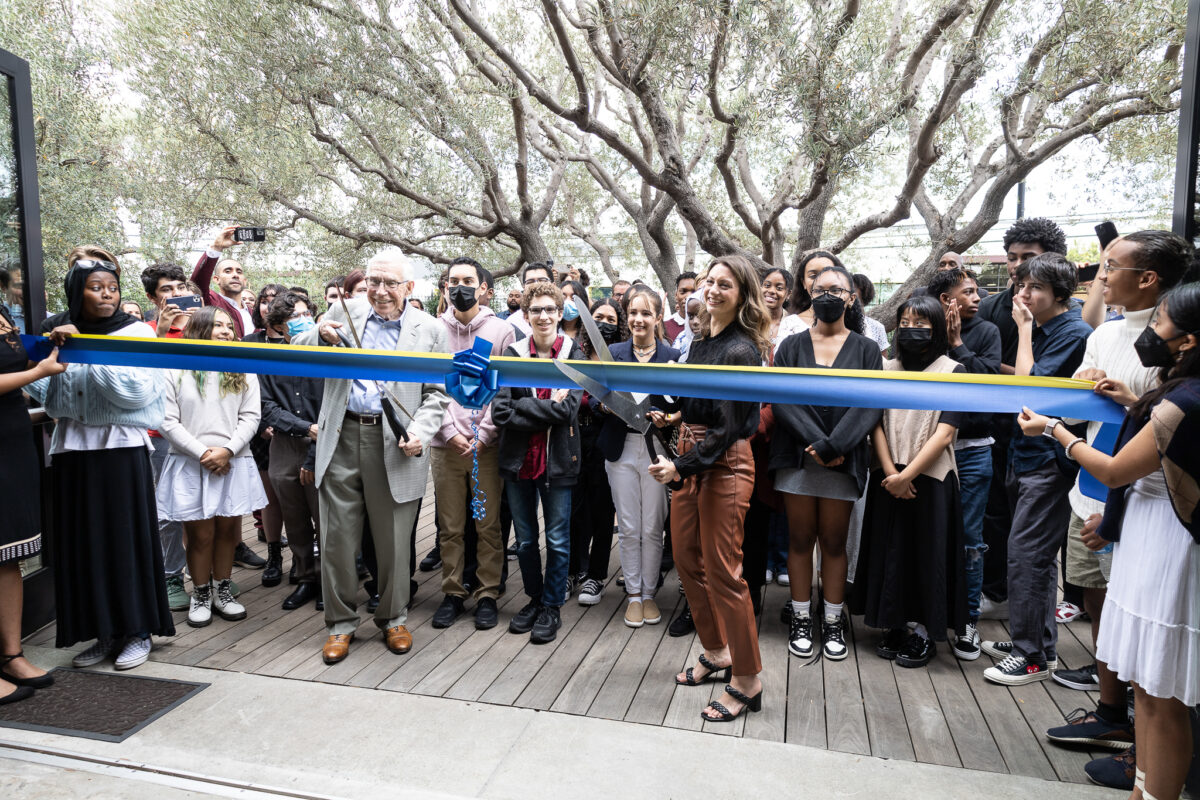 Though costly, at $22,000 a year, Portal is less expensive than most other private South Bay high schools.

Portal also makes the argument that families will save on college tuition because students take college courses, and are expected to graduate with a two-year Associate College degree, or a four year Bachelor’s College degree.