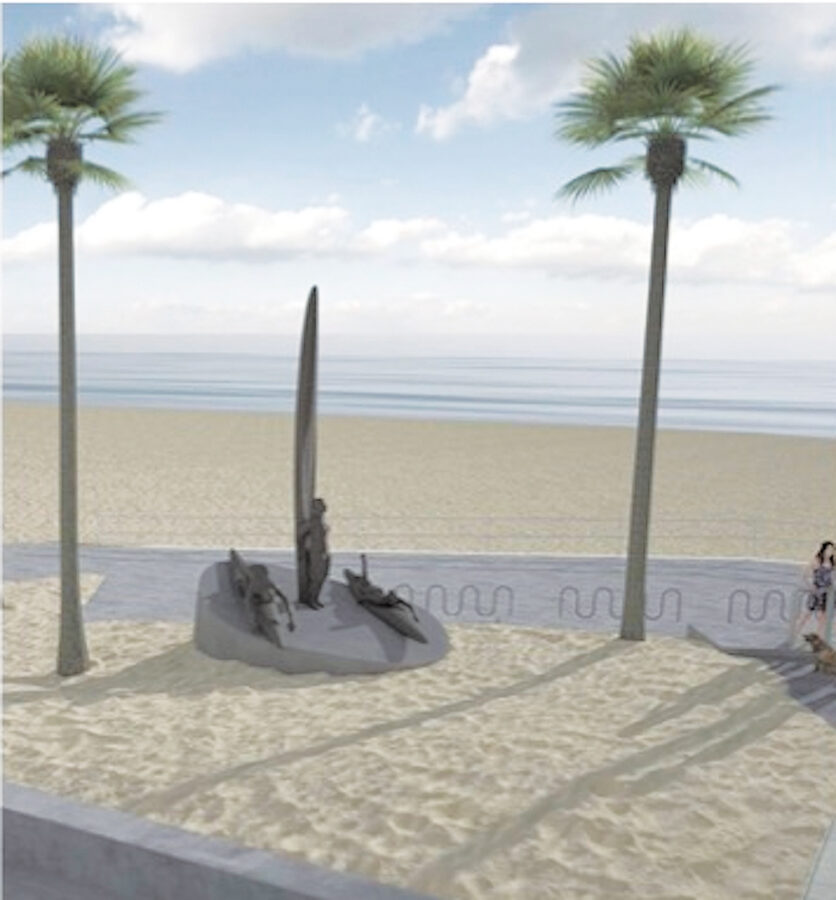 The South Bay Boardriders' Catalina Classic was designed by Brian Kingston and will be sculpted by Chris Barela. Rendering by Michael Lee and Associates

A phenomenon exists among those who undertake the Catalina Classic, the paddleboard race which begins at Two Harbors on Santa Catalina Island and ends —  for those who are indeed able to finish —  32 miles later at the Manhattan Beach pier.

When paddlers reach the R-10 buoy, four miles off Torrance Beach, they turn north and begin the final home stretch. But at this point, a strange thing frequently happens. Though they keep paddling, their progress relative to land appears to stall. It’s an optical illusion caused by the geometry of the turn north  —  one paddler called it “the eternal hypotenuse” —  but it has broken the will of many a paddler who has failed to finish the Catalina Classic. Yet it is challenges like this that have made the Classic a treasured part of local waterman lore.

“My original intention was to do it once and once only,” said Russell, who has completed the race 17 times and died near the R-10 a few other times. “It’s basically a goal of anybody that grows up here in the South Bay and surfs. In the back of their head, they know they always have to do the Catalina Classic. It’s a rite of passage. That rite of passage will carry on via this statue.”

Russell was speaking in favor of the South Bay Boardriders Club’s proposed gift of a $300,000 statue commemorating the Catalina Classic near the foot of the Manhattan Beach pier. And like the optical illusion at the R-10, the Boardrider’s attempts to erect the statue appeared mired after nearly three years of redesigns and discussions with commissions and subcommittees.

The statue was first proposed in July 2018, reviewed by the Cultural Arts Commission that October, and conceptually approved by the Council that December as a joint project between the City and SBBC. The City was prepared to tap into its Public Art Trust Fund to build a large patio and SBBC agreed to pay for the statue. The original design, by SBBC member Brian Kingston, was modeled after the iconic statue of Duke Kahanamoku standing in front of his surfboard at Waikiki Beach, in Hawaii. Councilperson Steve Napolitano advised the Boardriders that a woman paddler also needed to be featured. The scope of the design broadened to include both a standing paddler and two prone paddlers, including a woman, and a larger concrete patio that connected with the Strand. Given the increased scope, SBBC in December 2020 requested the Council pay for the statue while it paid the smaller costs for the infrastructure. That offer met a cool reception, and in September, a council subcommittee that included Napolitano and Councilperson Suzanne Hadley expressed concerns about the cost and the scope of the project.

And so Tuesday, the Boardriders returned with a greatly simplified design, featuring no patio, a male paddler standing in front of a 16-foot-tall paddleboard, flanked by male and female knee paddlers, accompanied by an adjacent plaque in which all the winner’s names would be listed. The proposed location is a 25-foot-square sandlot, adjacent to the bike path, just south of the pier.

“Thank you very much for your time and for the years working with us on coming up with this final design,”  SBBC president Tom Horton told the council. “We’ve taken a lot of input from the City, from residents, and from others to come up with this statue, and those of us that have been involved are really happy with this design —  even with the statue itself being placed in the sand, without the plaza, we think it just looks very organic and natural being there….Most of the residents we’ve talked to, even those that have not paddled or surfed before, they are in awe of this event and the people that do it and they want to preserve a part of their history that everyone is so proud of.”

Longtime resident John Ward said the statue would honor an important part of Manhattan Beach history. The Catalina Classic originated in 1955, and within a few years attracted thousands of spectators at the pier —  leading to the founding of the Manhattan Beach Open volleyball tournament and the International Surf Festival.

“I think it’s a very important part of our city’s history and our heritage,” Ward said.

At the outset of the council’s discussion, however, it appeared that the SBBC’s efforts effort might once again founder.

Mayor Hildy Stern wondered if the statue could be scaled down.

“Could we take what is now just an interpretive vision of it and scale it down, so that it is not this huge life-sized, and what looks almost like a bulky installation at this point?” Stern asked.

Architect Michael Lee said reducing the scale of the statue would reduce its power.

“We’re celebrating not only the race, but we’re celebrating the physicality of the athletes and the beauty of the boards,” Lee said. “So to make them three-quarters size or half size would trivialize the power of the piece.”

Councilperson Richard Montgomery finally interceded and made a motion fully in support of the proposal. He said the outpouring of community support for the project was unprecedented for any piece of public art ever commissioned within the city.

“Two and a half years,” Montgomery said. “We’ve watched it go through multiple revisions. We’ve watched going from having a landing, an ADA pad, and everything else…This was done by 800 Manhattan Beach residents, who took a long time, and patience, to go and give a gift like this to all of us, to the city. I am not going to sit there and micromanage and tell you five feet shorter or five feet longer. They listened to our community, listened to our Cultural Arts department and commissions and they added more bodies to it. So for me, this is not a hard decision.”

Montgomery’s motion passed unanimously. Napolitano said the process that led to the statue’s approval was long but worthwhile.

“The gift is appreciated,” he said. “But it was done right.” ER