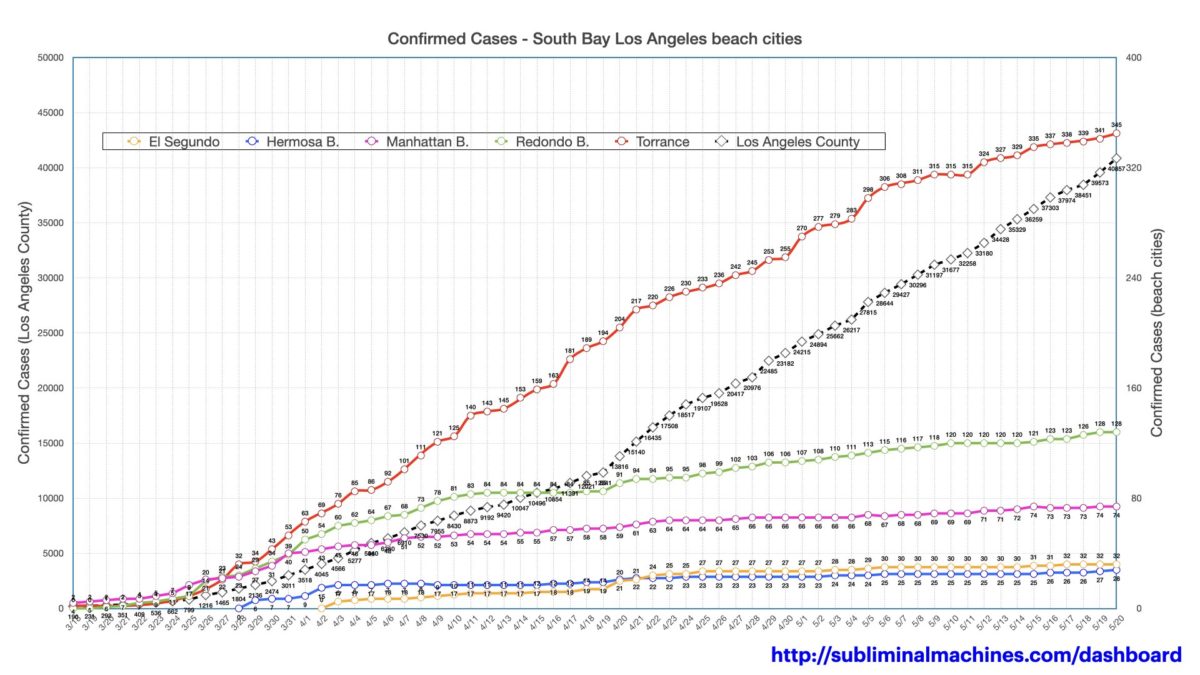 Although case totals continue to increase, public health officials said they may begin growing at a slower rate. Chart by Bernard Wong (subliminalmachines.com/dashboard)

Although case totals continue to increase, public health officials said they may begin growing at a slower rate. Chart by Bernard Wong (subliminalmachines.com/dashboard)

The coronavirus is spreading slowly enough to allow further relaxation of the restrictions put in place to battle it, Los Angeles County officials said Wednesday, and to begin to reopen sectors of the economy struggling to survive.

The average number of people infected by a person with an active case of COVID-19, the disease caused by the coronavirus, has fallen below one, said Dr. Christina Ghaly, director of the Los Angeles County Department of Health Services. This is a remarkable change from eight weeks ago, when the average was about 3.5 new cases per infected person, a figure far higher than the number for seasonal influenza. The decline is almost certainly attributable to the stay-at-home order and social distancing measures put in place in late March, Ghaly indicated. It means the number of new cases of COVID-19 is likely to continue to decline in the coming weeks, further easing concerns that the area’s medical system would be overwhelmed by a surge of cases.

Safer at Home, the name given to the county Public Health Department’s order asking people to shelter in place, has been amended multiple times over the past two weeks, with new types of businesses allowed to operate, and beaches and recreational areas opened for limited activity. Ghaly said the county plans to continue easing restrictions, but at a slow pace and with many of the trappings of the coronavirus pandemic, such as face coverings and maintaining six feet of distance among people, and remaining in effect. Over the past few months, scientists have learned that COVID-19, along with having a high number of asymptomatic infections, can have a lengthy presymptomatic phase, meaning that it could take weeks for a change in the infection “curve” to be detected.

“Should the rate of transmission increase, the people infected today will not be ill enough to seek medical care for two to four weeks. By the time we notice an increase in cases, there will have been increased spread for a number of weeks, causing increased strain on our healthcare system and the workers who are so dedicated to it,” Ghaly said.

Nonetheless, many of the medical system indicators that state officials have identified as key metrics for measuring an area’s progress on containing the coronavirus show progress. The number of available ventilators, hospital beds, and spots in intensive care units are well within margins public health experts consider sustainable. In areas badly hit by the virus, like New York City, the medical system was overrun, and models from the University of Washington’s Institute for Health Metrics formerly forecasted that demand for ICU spots and ventilators would exceed capacity in California.

Dr. Barbara Ferrer, director of the Los Angeles County Department of Public Health, reported 57 deaths from COVID-19 Wednesday and 1,324 new cases. The number of new cases is higher than the daily median, which may reflect some tests processed in batches over the weekend.

The county has administered more than 379,000 tests since the pandemic began. In a key indicator, the number of people taking PCR tests who received a positive result declined this week to about 9 percent, after remaining stable at about 11 percent for more than a month. The smaller share of people testing positive means the increasing numbers of cases the county is reporting do not necessarily reflect a faster rate of spread for the virus.

Despite the encouraging news, Ferrer urged people to continue following social distancing recommendations over the approaching Memorial Day weekend, pointing to parties and social gatherings that have recently been the sites of clusters of new infections.

“The virus hasn’t changed. It’s still relatively easy to get infected,” she said.

Elected officials also described a “sense of urgency” to address the mounting economic damage caused by the coronavirus and the measures taken to contain it. Tuesday marked the first gathering of the Los Angeles County Economic Resiliency Task Force, a gathering of elected officials and representatives from various economic sectors. The industry representatives offered an overview of how businesses had responded to the pandemic and subsequent closure orders. Los Angeles County Supervisor Kathry Barger described their assessment as “sobering.”

Small businesses and the poor have been particularly impacted. Many small firms indicated that they will lack the resources to reopen even when allowed to. Of the more than 1 million employees who have filed for unemployment benefits in the county, about 75 percent of them were laid off from jobs in which they made less than $50,000 per year.

Barger said that she understood the desire among some businesses to reopen, and said many of the restrictions could be lifted by July 4. In the interim, elected officials will await guidance from the state, and the assessment of local doctors and scientists.

“Public health is going to drive that discussion and provide the parameters as to how each sector is going to open,” Barger said.