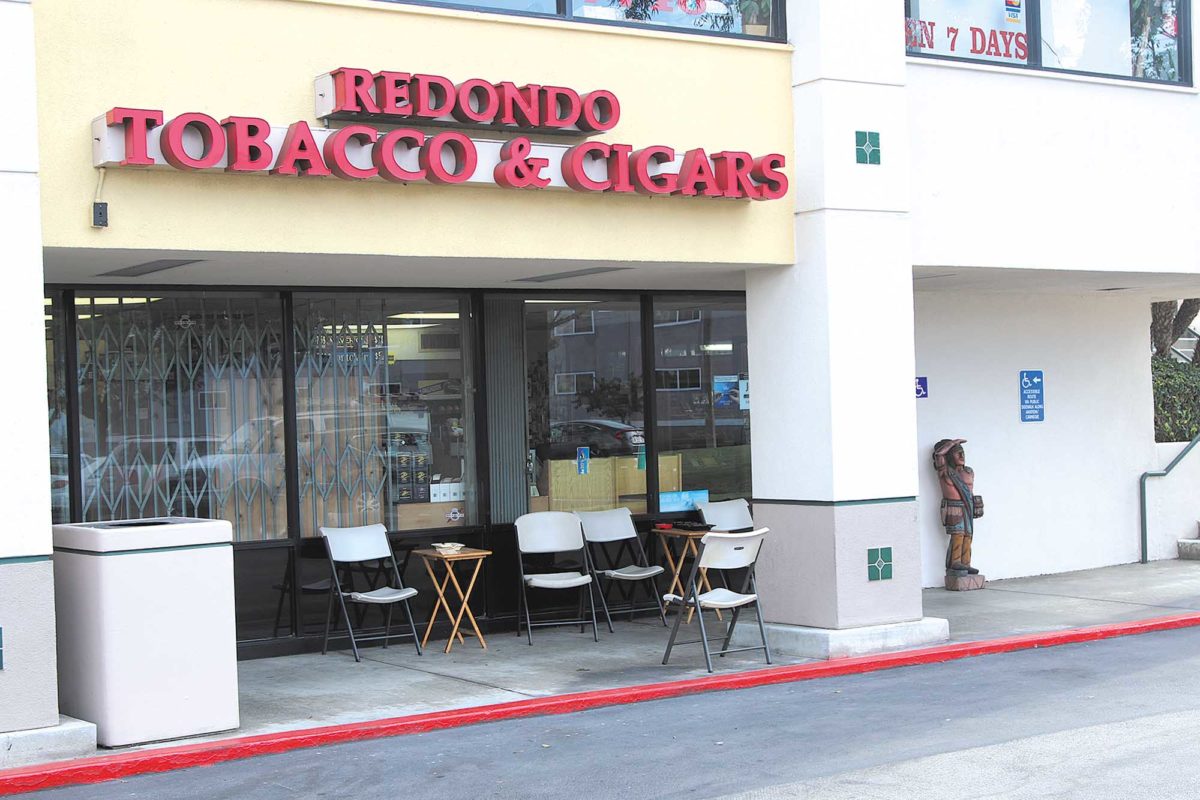 Redondo Tobacco and Cigars, near Aviation Boulevard and Artesia Boulevard, will be required to comply with new tobacco retailer laws after the Redondo Beach City Council passed an ordinance Tuesday night. Photo

By 2020, Redondo Beach will be largely smoke-free thanks to a series of ordinances passed by the Redondo Beach City Council, banning smoking in most public places, requiring retailers to get licenses to sell tobacco, and forcing the city’s smokers to go elsewhere to buy flavored tobacco and vape products.

According to the ordinances passed on Tuesday night, in separate ideologically-split votes, Redondo Beach’s 43 tobacco retailers will be required to halt sales of all flavored tobacco products, following petitions by a series of audience members and impassioned arguments by Councilmembers Todd Loewenstein and Christian Horvath. A previous draft ordinance would have allowed for the sale of “established” flavors, including menthol- and mint-flavored tobacco.

The ban is of particular significance to Mayor Bill Brand, who is currently undergoing treatment for lung cancer. A lifelong non-smoker, he believes he’s at least partially a victim of second-hand smoke, owing to his late mother’s daily habit of smoking unfiltered Pall Mall cigarettes.

“I’ve got a 20 percent chance of being here in three years, but I’ll take it,” said Brand, who has already survived bouts with other forms of cancer twice. “I’ve had worse odds.”

“Flavors have addicted youth, but the flavors that are getting teens addicted are not just sugars and fruits: mints are just as addicting,” said Redondo Union High School senior Jenna Tripoli. “It’s ignorant to pretend that mint-flavored products are exclusively attractive to adults and unappealing to minors.”

Tripoli, along with RUHS sophomore Jadelynn Collins and freshman Rani Crosby, argued against the tobacco products on the grounds of student safety. Advertising for the products is frequently visible online and in everyday life for students. And students using public transportation, such as the Beach Cities Transit lines that connect RUHS to much of Redondo, can frequently find smoke shops advertising tobacco and vaping products within steps of bus stops.

“I’m seeing girls vaping in the locker room, a Juul falls out of someone’s pocket, advertisements on websites we use to study; teen vaping is steadily rising and getting worse as time progresses,” Tripoli said. According to a 2019 Beach Cities Health District report, 28 percent of local 11th graders reported using e-cigarettes or vaping devices in the 30 days prior to being surveyed.

The ban on public smoking — which includes streets, sidewalks, and parks, as well as private places open to the general public, such as bars, restaurants and stores—puts Redondo Beach in line with neighboring Hermosa Beach, which passed a ban in 2016, and Manhattan Beach, which passed a ban in 2014. However, Redondo’s ordinance allows a carve-out for property owners to apply for permits creating designated smoking areas on their land.

Long-time advocates for smoking prohibitions were thrilled, including Carol Almeda of the Asian-American Drug Awareness Program. Almeda has been petitioning the City to enact ordinances restricting smoking for more than seven years, through the tenure of three mayors.

“The situation has evolved to a crisis of sort, endangering the lives of our youth and not only that, but compromising the future…we’ve done events at high schools and found, right in our midst, vape cartridges,” Almeda said. “Children and youth who are not supposed to be in possession of these products need to be protected, and this ordinance protects the underaged youth.”

But retailers argue that they and their customers will feel left out in the cold without a match.

A group of 7-Eleven store franchisees, accompanied by a 7-Eleven corporate representative, argued that their stores have comprehensive checks against sales to minors, including ID check systems.

7-Eleven Market Manager Kia Hasheminejad said that he could not find an instance of any of his stores failing inspections or secret-sales in Redondo Beach within the last five years.

Jaime Rojas, of the National Association of Tobacco Outlets, argued that tobacco usage by minors is not as significant a problem as alcohol and cannabis use, which are reportedly used in greater numbers by Beach Cities minors.

Council members were largely unmoved by the retailer’s arguments.

“Let’s not kid ourselves; kids will find their way around [ID checks]. It’s like water around rocks,” Loewenstein said.

“Like everything, it’s always the bad apples that create the issues that come to us,” Horvath said. “People are making lousy decisions that are affecting people who are doing it right…like Todd just mentioned, any adult can walk in and purchase any of these products,” then hand them off to waiting minors.

Council members Nils Nehrenheim and John Gran were less favorable toward full-flavor bans; Gran preferred a “stepped approach” to the ban that was less likely to immediately harm retailers. Nerhenheim supported a ban against flavored products, but argued that the City was seeking to make out retailers “like they’re evil,” and was skeptical that police and code enforcement would be able to enforce the ban. He and a number of his like-minded colleagues (including Loewenstein) likened it to the city’s leaf blower ban, which they find to have been ineffective.

Councilwoman Laura Emdee made the first move, favoring an ordinance that banned all tobacco flavors but mints; however, after learning that Brand would veto the ordinance immediately, Emdee supported a ministerial change that allowed for a complete ban of flavored products. The Council then allowed for a 12-month grace period for retailers to come into compliance — and ready themselves for a post-flavored-tobacco world — after the ordinance took effect.

Soon after, a split vote of the Council approved a plan to largely ban smoking in public places, save for businesses that seek permits with the City, after a motion for a total public smoking ban was defeated.

The ordinances will come back for their second reading at a later date. But at one point in the meeting, Brand mused that Redondo may not be done yet.

“Hopefully we can take it to the next level and ban sales in the city,” he said.