“The basic nature of human curiosity is to look up in the sky and wonder; how alone are we? Where do we come from, and are we alone? Who wants to be the generation that stops (learning)? I don’t. We’re in this continuum. We are a curious species, this is what we do.” — Scott Willoughby, program manager,  James Webb Space Telescope.

Built by humans in Redondo Beach, it will never be seen by us again.

It launches into space Dec. 24 from French Guiana, taking a month to fly to its destination a million miles from Earth.

If something goes wrong, like the last time, it will be unreachable.

The $10 billion project is the James Webb Space Telescope, the successor to the Hubble telescope, for which a microscopically-too flat mirror blurred its images until a Space Shuttle crew went up and corrected it.

The Webb will include no such opportunity for repair.

Pointed more than 10,000 times farther out, named after the director of NASA in the time of President Kennedy, the Webb is seven times larger than Hubble, a hundred times more powerful and that much more fragile.

While its predecessor was small enough to launch essentially fully-formed, this has to unfold in flight.

As the vehicle thrusts past the moon next week, the most complex deployment ever attempted in one mission begins — with more than 300 single-point failure items, and 50 major deployments – all needed to unveil the telescope like Origami in reverse, including five layers of a thin, tennis-court sized sunshield.

For three weeks, into the new year, the Webb will form as it flies, deeper into space. 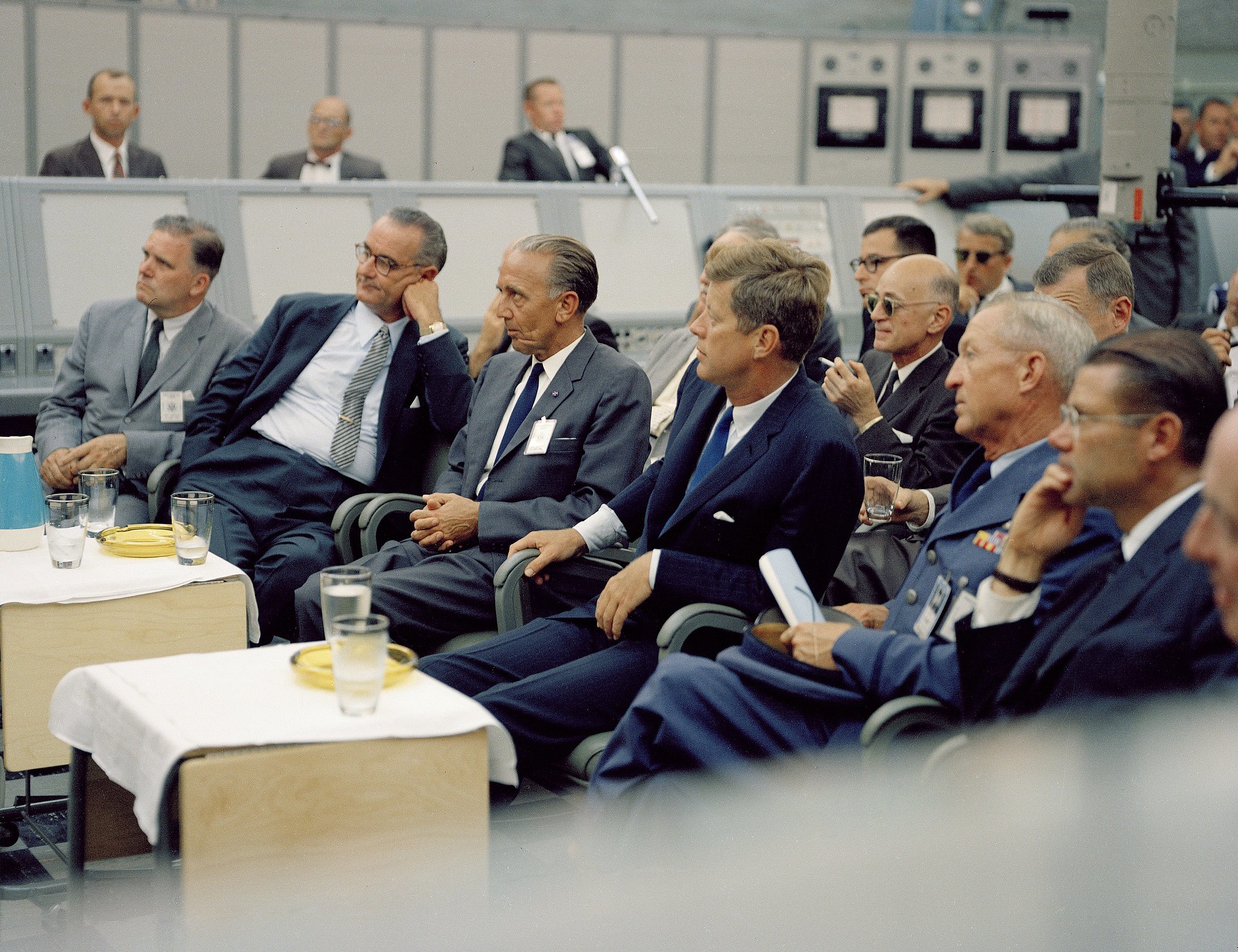 To the launch pad

Since 2002, from 500 to 1,000 Northrop Grumman workers at Space Park in Redondo Beach, at a given time, have been assigned to the Webb project, part of an effort by 300 companies and universities in 29 states and 14 countries.

Many at Northrop Grumman have spent their entire careers so far on the Webb telescope.

On the night of Sept. 24, technicians bolted the packed telescope inside a steel container and lifted it onto a trailer. It was driven down Pacific Coast Highway to a cargo ship at the Seal Beach Naval Weapons Station.

A 16-day, 5,800-mile sea voyage followed, through the Panama Canal to Europe’s spaceport at the northeastern edge of South America.

The main piece built in Redondo Beach, and the Webb’s most delicate, is the sunshield.

Before the telescope itself unfolds – locking in a 21-foot, 18-piece honeycomb mirror coated with a layer of gold 700 atoms thick – the shield goes first.

“I think of the sunshield deployment as similar to a Rube Goldberg machine,” said Krystal Puga, Spacecraft Systems Engineer at Northrop Grumman in Redondo Beach.  “ …Triggering one event after the other until the entire sunshield is deployed.”

First, its front and back pallets fold down. Then all 107 sunshield release mechanisms need to fire on cue, to pull the layers and extend them by mid-booms into its diamond shape.

After the metallic sheets are drawn into place, separations occur and tension is added by pulleys and more motors.

The shields originally had 109 release devices. It got simplified to 107.

The sunshield is made of Kapton, a material similar to Mylar, along with aluminum and silicone. Each layer consists of 54 rectangles, connected by therma-spot bonds, which act like rip stops, containing damage from micrometeorites/meteoroids.

“Its own base characteristics are very strong,” Willoughby said.

Each layer acts as backup for each other — diluting any sun rays that make it through, and sending them out the side.

How the shields fold was another issue to be perfected.

“That sheet on your bed, every time you fold it, you don’t know where that crease is going to go,” said Willoughby.

After launch, to avert potential problems, the four-day process to set the sun shields may be slowed down by ground control. 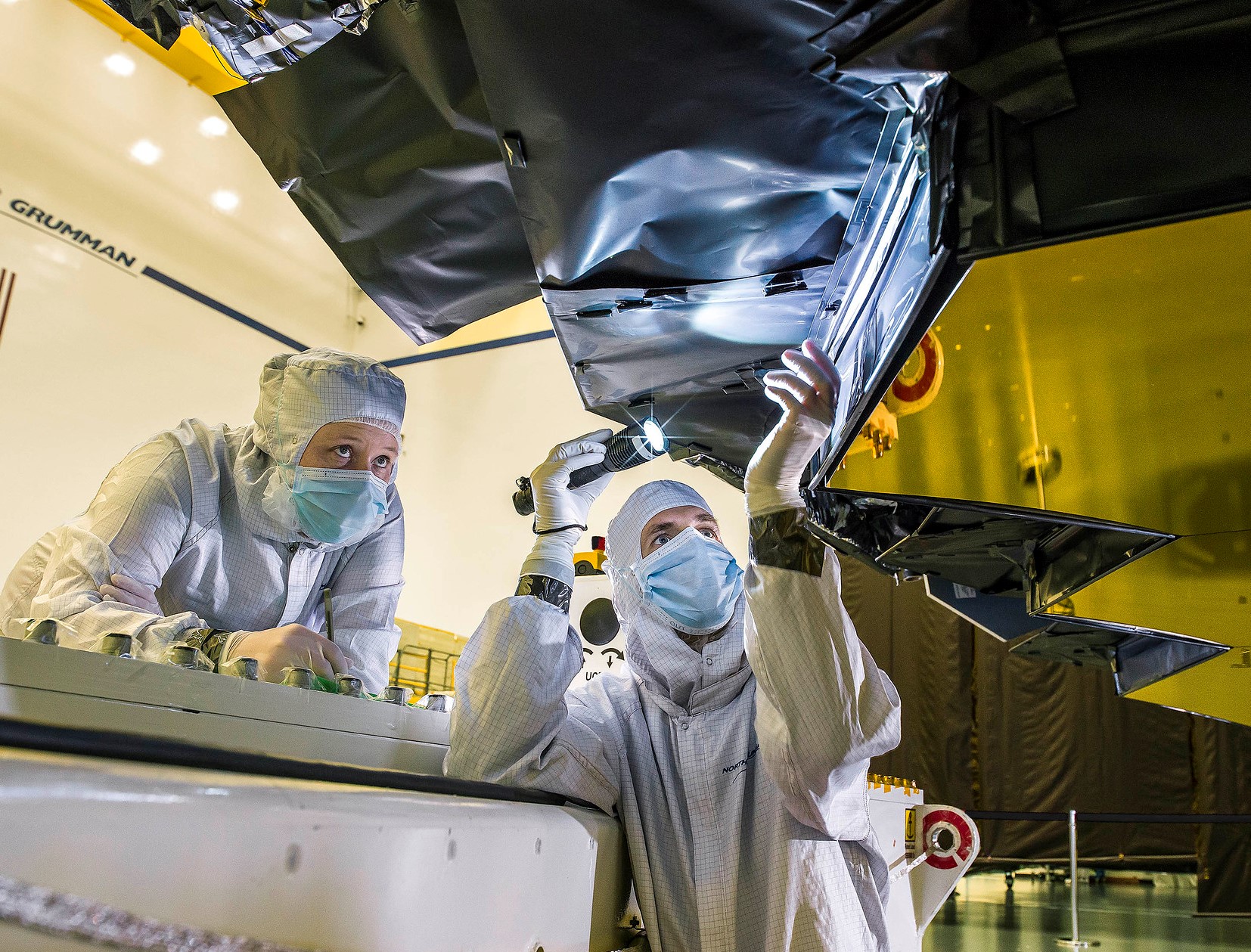 Webb is the largest, most powerful and complex space telescope ever built.

Now, as NASA stated, ‘to unfold the history of the universe, we must first unfold this telescope.’

Onboard instruments will have two main tasks — to take pictures and break down light into its wavelengths, in order to decipher chemical and physical properties of cosmic matter. Webb’s sensitivity could theoretically detect the heat signature of a bee as far away as the moon is from Earth.

As for the pictures, they will aim for the distance of space – and time.

The further you get away from Earth, the more you can look into the past of the universe, because of the time it takes for light to travel.

When we gaze up at the moon, we see it as it was 1.3 seconds earlier. Looking at Jupiter is looking at it 40 minutes ago.

A young planetary system known as Beta Pictoris and its space dust will be one of Webb’s first studies.

At a distance of 63 light years, in infrared light, the dust appears bright, which suggests information to gather. The properties of this dust — from the collisions of comets, and larger rocks – will help scientists determine whether the contents of our solar system are unique.

In order for the Webb to get a closer look, many things have to go right – especially the sunshield.

Encroaching meteors in the path of the telescope are not a concern.

“It’s a very small probability,” Willoughby said. “And we can move our vehicle. There’s not much out there in this orbit.”

Originally planned for launch in 2010, delays on the Webb project stacked up. It was nearly canceled by changing congressional representatives as funding required reappropriation at regular intervals.

Local engineers and technicians built the 12-rocket thruster propulsion system, along with the “cryocooler” – like a refrigerator in space – powered by converting helium from a gas to a liquid, to chill the telescope’s infrared sensors behind the mirrors.

The spacecraft bus, which holds its electrical power, telecommunications, guides and navigation systems, was also built by Northrop Grumman in Redondo Beach. 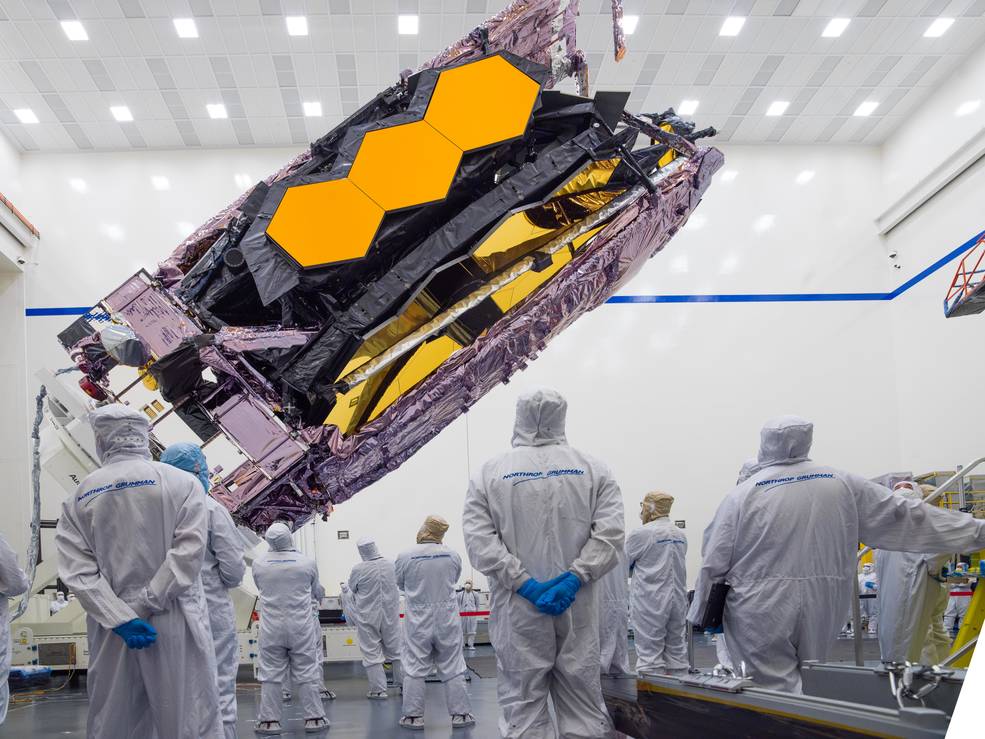 Northrop Grumman engineers observe the folded NASA Webb telescope in Redondo Beach in October as it was prepared for launch. Courtesy NASA/Chris Gunn

In one local test of the unfurling sunshield, it tore.

Engineers responded with a “shake” experiment, during which another 20 screws, of the thousand that secure the sunshield cover, came loose, leading to concerns of another tear.

The screws were an addition after nuts were added previously so the screws would not stick out too much. The bolts led to a few screws not properly threading. Another issue to fix.

“You design it, you build it, you design a computer model to imitate it,” Willoughby said.

All of it had to be done while eliminating something that was there regardless.

“You have to off-load gravity,” said Willoughby. “Gravity did it. The system didn’t do it on its own. We couldn’t put the (shields) in a pool like astronauts.”

Other issues were to account for vibration in the launch process, both sounds and physical.

“You can feel sound,” he said.

Much of the aim was to reduce the amount of moving parts.

Refined testing led to technological advances for a telescope that, although seven times as big as Hubble, has half the mass.

“We were inventing as we went along,” said Willoughby.

Testing continued on each element until the shield’s five layers were folded and stowed.

Why spend the $10 billion, the time, the materials, the international effort for a project that may not work?

“As a species, our curiosity is to learn more. The basic nature of human curiosity is to look up in the sky and wonder; how alone are we?” Willoughby said. “Where do we come from, and are we alone?

“(Through time) it’s been humans learning more. Who wants to be the generation that stops? I don’t. We’re in this continuum. We are a curious species, this is what we do.”

The Hubble telescope, after it was repaired in 1993, delivered startling images that we have all seen, such as a tower of pink and gray clouds, gas and dust at the birth of stars in the Eagle Nebula.

Other revelations from Hubble were that the universe is significantly older than previously thought, the existence of “supermassive black holes” was confirmed and water vapor exudes from an ice-covered moon of Jupiter.

In the 1920s, Edwin Hubble’s university work found that there was at least one other galaxy besides ours. His namesake telescope showed there are billions more.

The Hubble still orbits 375 miles above the Earth.

Webb mission lead systems engineer Menzel was asked at a Nov. 2 NASA press briefing if the sunshield is the most daunting element of the entire project.

“The sunshield is one of these things that is almost inherently undeterministic,” he said.

He explained that the shield’s motors are capable of making some adjustments, and with a cryogenic margin of error (45-50 degrees) built in, if part of the five layers fail to fully unfold into place, the telescope may be okay.

Webb is not encased in a tube like most other telescopes, because it would interfere with its cooling.

So when can, or will, the scientists and engineers breathe a sigh of relief after launch?

Bill Ochs, NASA’s Webb Telescope Project Manager, explained that it depends on what your job is.

“This team does not give up,” Ochs said. “We don’t talk about ‘what do we do if we fail.’ We talk about how we correct problems we see on orbit and how we move forward from there.”

If there is any way, in the future, for humans to reach this, is the Webb serviceable?

“It has not been designed that way,” said Ochs. Though he noted that the fuel tanks, the contents of which are expected to last 10 years, perhaps up to 13, are accessible.

“The ‘gas tank’ is available so if somebody was ingenious enough to get up there and try to refuel it, they would be able to refuel it,” he said.

After liftoff and 29 days of flight and deployment, the Webb’s thrusters will fire again to propel the craft into its prescribed orbit, aimed for a “LaGrange” spot in space – where the Earth’s gravity is offset evenly by the sun’s.

From there, if all has gone according to plan, the Webb is expected to send its first images back to Earth in six months.

Another milestone – imagined for years in the minds of many in the South Bay.

“I can’t help but see the reflections of the thousands of individuals who have dedicated so much of their lives to Webb, every time I look at that beautiful gold mirror,” said Ochs. ER