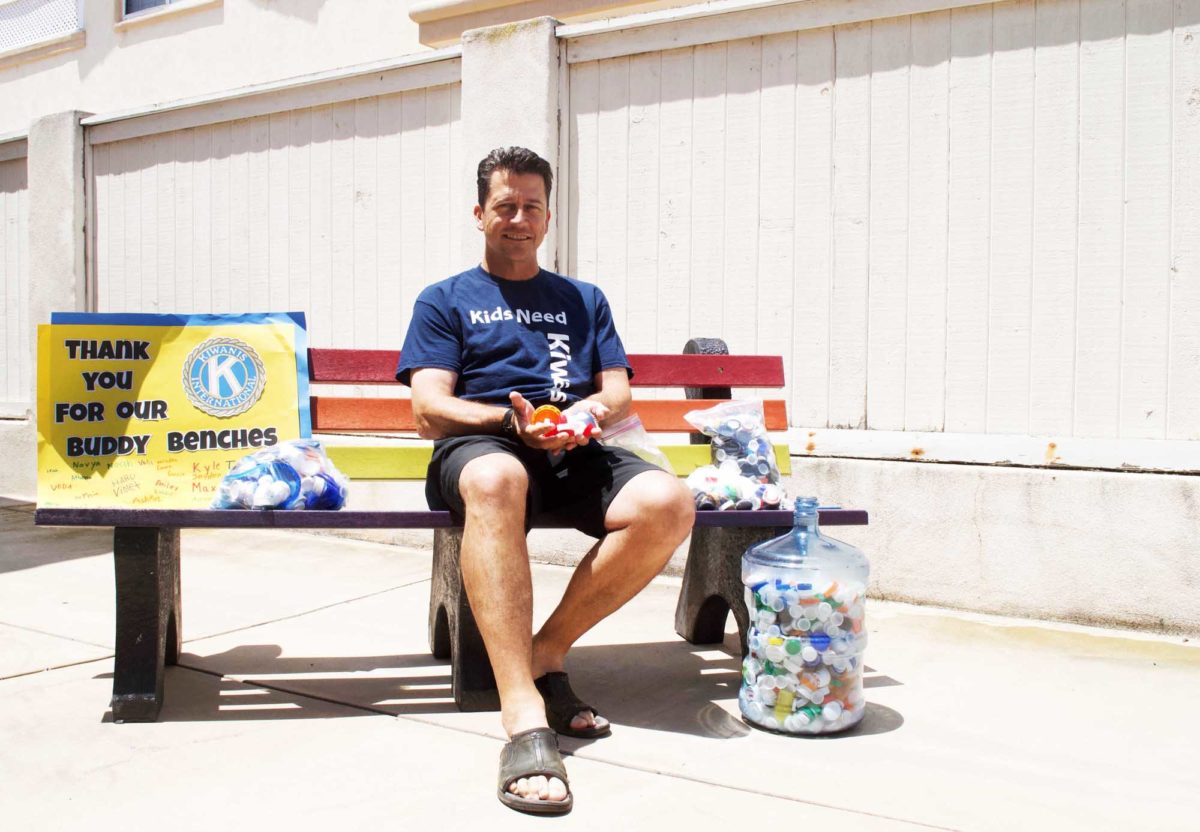 John Gran on a Buddy Bench that will be installed in South Bay schools. Photo by Sarah Plenge

by Sarah Plenge
The slogan of Torrance’s Joseph Arnold Elementary School is “if you can be anything, be a friend,” something that Buddy Benches embody entirely. Buddy Benches are meant to serve as an emotional space for children on school playgrounds. The idea is that when a child is feeling sad, left out, or just needs someone to talk to, they have a place to go and sit. When the other children see someone on the bench, it signals an opportunity for them to step up and socialize with someone who might otherwise feel cast out.
These benches are not yet in use at Arnold Elementary, but will be installed on school property in the coming months. At least nine schools within the South Bay and surrounding areas have reached out to show interest in the Buddy Bench program.
The program, in this case, is led by the Kiwanis Club’s Pay-It-Forward Buddy Bench program, and spearheaded by Arnold Elementary special needs physical education teacher Carol Schreiner.
The main focus of any charitable initiative, Redondo Beach City Councilman and Kiwanis Club President John Gran said, is to see projects as “a way to give back.”
The process to create an actual bench takes a village — and a lot of recycling. Bottle caps are collected over the course of several months from all reaches of the community. As such, the Kiwanis Club has been acting as a “pipeline for caps” to be used for benches. Each bench is composed of roughly 500 pounds of recycled bottle caps that are sent to a company in Indiana, where the plastic is processed.
“I even had people showing up at Kiwanis Club meetings with bagfuls of caps,” says Gran. “Sometimes I’d even get them on my doorstep.” Schreiner sees this kind of involvement as “empowering” for the community as a whole, as it inspires everyone to get involved.
Gran and his wife, Cynthia, drove cross-country in a U-Haul to deliver the first round of caps, and then ferried the first benches earlier this year. Although the road trip was “a great time,” Gran hopes to find a sponsor like Target or Walmart in order to keep the process sustainable.
When asked how they plan to mitigate any possible social backfire these benches might have, Schreiner delegated that it would be the “school’s responsibility” to ensure that the benches were used appropriately.