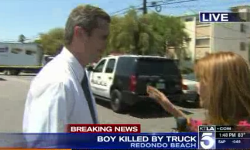 A 7-year-old boy was killed Friday morning as he bicycled near the Albertson’s grocery store on Artesia Boulevard in North Redondo Beach. A truck making a delivery accidentally ran over the boy near the store’s loading bay.

According to police reports, at about 10:28 a.m. an Albertsons truck was backing into the bay when the driver sensed something wrong. Redondo Beach Police Department Sgt. Shawn Freeman said that the driver stopped his vehicle and jumped out to take a look when he discovered the boy and his bicycle pinned under the truck.

“He thought, ‘You know, something is not quite right,’” Freeman said. “He gets out to look and unfortunately discovers this 7-year-old boy under the truck.”

A 911 call was made immediately and paramedics quickly transported the boy to a local hospital, where he succumbed to his injuries. No charges have been made and police are investigating the matter as an accident.

“It’s a horrible, tragic accident for the family, for that truck driver, for the store, and for everyone around that neighborhood,” Freeman said. “Especially the family, obviously – this poor family is going to have to deal with the loss of a 7-year-old boy.”

The loading bay is located on the north side of the store, near the surrounding residential neighborhood.

Police did not release the boy’s name.  Neighbors who appeared on televised reports identified him as Jeremy Perez and said his mother was a newly hired employee at Albertsons.  According to neighbors, the family lived nearby and the boy — in the care of a babysitter — was going to visit his mother at work.

“He was my nephew, a very outgoing, full of life little boy,” wrote David Lopez, the boy’s uncle, on a Facebook posting on the NBC Los Angeles website. “I will miss him so much…my family has suffered four deaths this year.”

Investigators are conducting an independent review to determine exactly how the accident happened.

This is the second traffic accident fatality in as many days in Redondo Beach. On Thursday, a 71-year-old Long Beach man passed out while driving down Harbor Drive and crashed into a hotel sign. He suffered a cardiac arrest and was pronounced dead shortly thereafter at a local hospital.