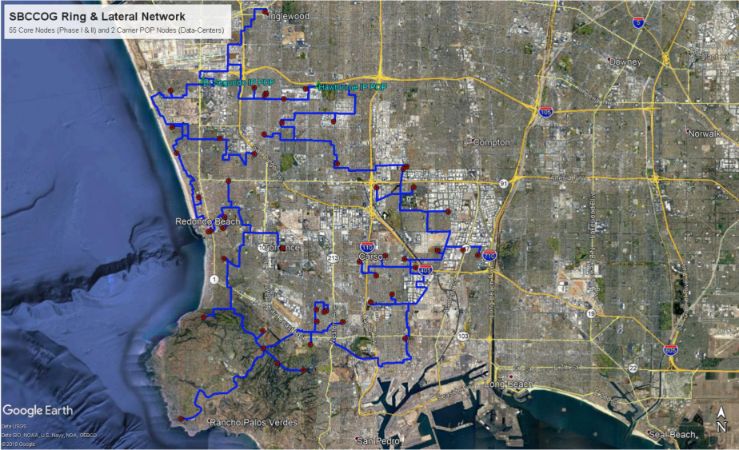 A map of projected sites that will connect to the regional fiber network. Image courtesy South Bay Cities Council of Governments

The South Bay may be the next Southern California community to future-proof its infrastructures with a regional fiber-optic cable network that will bolster city-run facilities and programs. However, leaders believe that boosting the infrastructure will also benefit residents and businesses that need top-shelf Internet speeds.

On July 11, the South Bay Cities Council of Governments announced it had contracted with American Dark Fiber to provide a gigabit, scalable broadband network for its 16 member cities and unincorporated communities.

“First, it will create savings for each of the cities. That’s always good, anytime cities can save money by working together and cutting down costs,” Horvath said. SBCCOG’s agreement with American Dark Fiber stipulates that cities will have access to one-gigabit upload and download speeds for $1,000 per month.

According to a report commissioned by SBCCOG, a survey of 10 South Bay cities indicates that municipalities are paying an average of $3,627 per month for internet speeds well under one gigabit. Redondo Beach, the survey shows, is paying $6,300 per month for 100 megabits of service.

The second reason, he said, is that the cities will not be on the hook for infrastructure costs. Instead, initial costs will be paid for using $4.4 million in Measure M sales tax revenues, approved by voters in 2016.

Getting approval from the County to tap into those funds was a hard sell, according to SBCCOG Executive Director Jacki Bacharach, until Inglewood Mayor James Butts helped to win LA Metro’s attention. Metro acquiesced, then set up a condition of approval: The South Bay could get the money, but needed to connect to LA County’s real-time traffic information system.

“They may have been thinking we’d be upset, but we’re thrilled with that,” Bacharach said. Networking with the regional traffic system at real-time speeds will allow for “true signal synchronization beyond each jurisdiction,” Horvath said, hopefully bringing “positive changes” to surface streets throughout the South Bay, and prepping the cities for automated vehicles and other high-tech transportation solutions.

“But no one talks about the trip not taken,” Bacharach said, alluding to increasing trends in telecommuting and working from home. SBCCOG leadership believes that the fiber infrastructure, once in place, can then be leveraged to benefit businesses and residents.

“If we run conduit as a part of traffic projects, then we’ll have a backbone of a network that we can tap into for major commercial corridors and residential streets,” Horvath said, before extending the tendrils of the network further into neighborhoods during street resurfacing programs.

Once those are in place, cities — including Redondo — will have plenty of options in leveraging that network infrastructure, including in possible public-private partnerships with internet providers.

“ I would hope we’d be able to offer it for cheaper prices than what the current commercial system is offering,” Horvath said.

Creating that backbone would put cities in league with the neighboring Silicon Beach, and hopefully stem the outflow of companies leaving South Bay cities for other areas with better networking infrastructure.

Running conduit in that manner, without grant funding from sources such as Measure M, will be expensive, and must necessarily be part of municipal capital improvement project plans dating out years into the future.

“But it’s gotta be a moonshot. If we don’t make it a priority, it’ll never get done,” Horvath said. “We have to hold ourselves accountable to saying we’re going to do it, figure out how to do it and how to pay for it.”