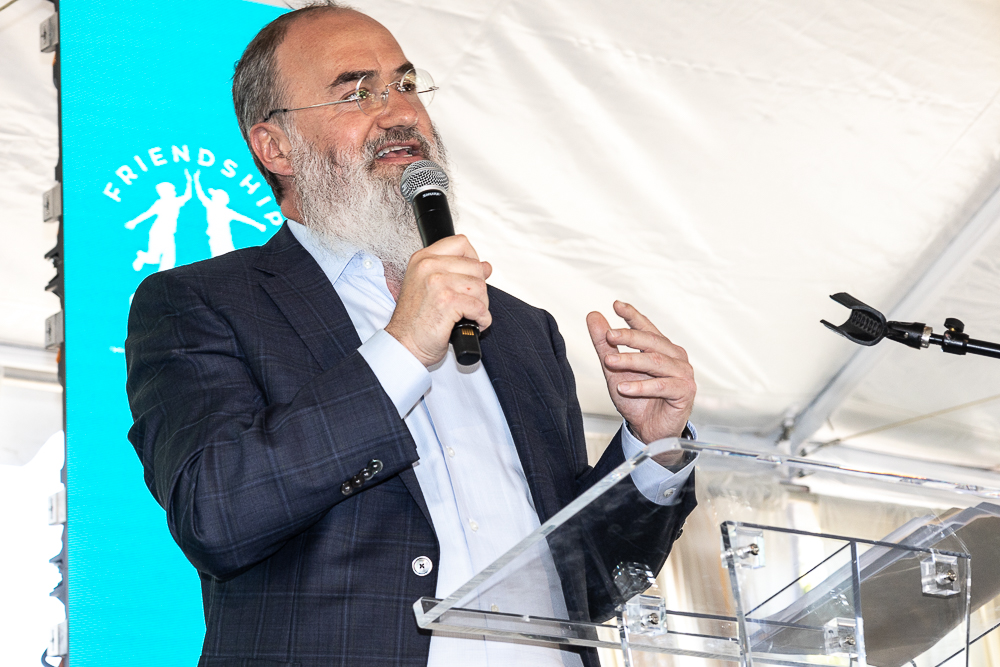 Rabbi Yossi Mintz shares his vision for the Friendship Campus during its groundbreaking last Wednesday, August 10. Photo by Kevin Cody
by Kevin Cody

“If you want to light a candle, if you want to inspire other people, first you need to be a candle yourself,” Rabbi Yossi Mintz is fond of saying, even when he is unabashedly that candle. 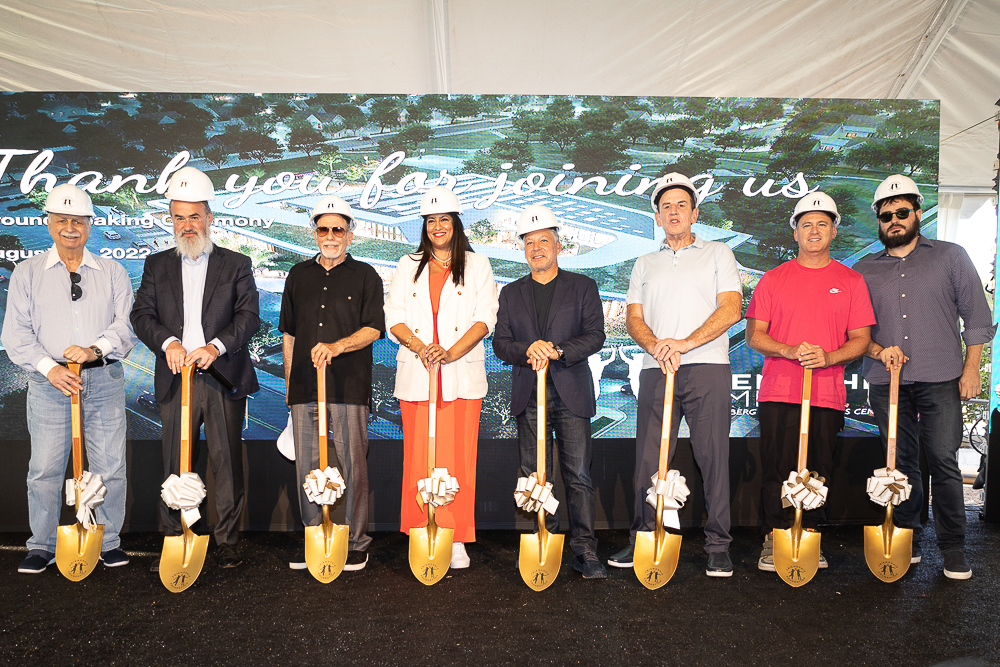 Those five donors, alone, contributed over half of the $36 million initially budgeted for the Friendship Campus. The budget has since increased to $55 million. Of that, $42.5 million has been raised, well past the 50 percent threshold conventionally raised before construction begins.

The five legacy donors, all Manhattan Beach residents, all traced their support of the Friendship Campus to a personal interest in special needs kids, sparked by Rabbi Mintz’s vision.

The Jewish Community Center Chabad rabbi “touched my soul,” as Greenberg put it, in 1996, when he approached him for support of the Friendship Circle.

The Friendship Circle, now known as the Friendship Foundation, provides social opportunities for autistic, Down Syndrome, and other special needs students by pairing them with mainstream students.

“My third grade teacher asked for volunteers to help kids who had mobility issues walk from class to class. I raised my hand,” Greenberg told the groundbreaking audience..

Since that 1996 meeting, the Friendship Foundation has expanded from Sunday meetings at the Jewish Community Center to 10 South Bay School districts with 40 school clubs, serving over 2,000 students annually. The program is largely funded by the Skechers/Friendship Circle Pier to Pier Walk, which has raised over $20 million in the last 10 years. 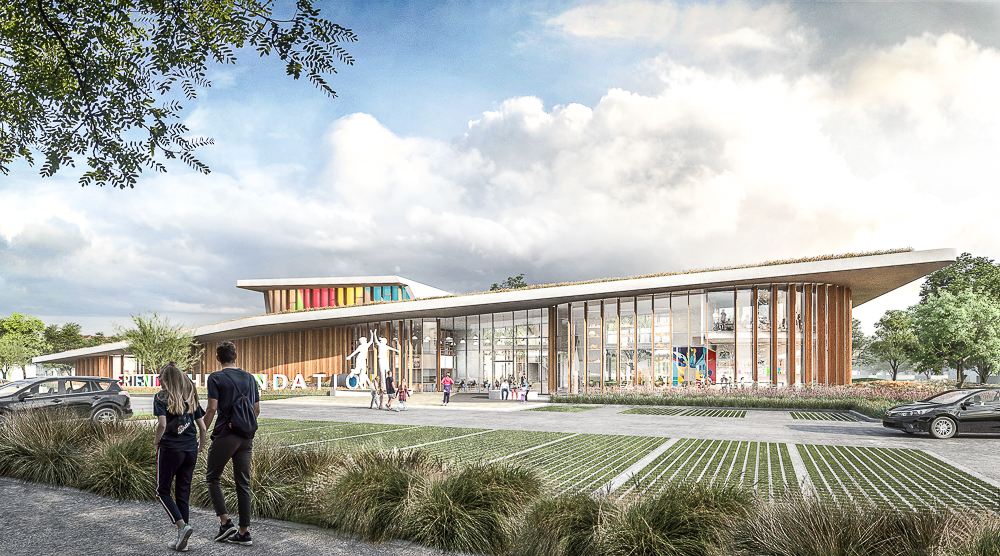 But the Friendship Circle wasn’t the end of Rabbi Mintz’s vision. At that 1996 meeting, he told Greenberg he wanted to start a vocational school for special needs students. After high school there is little opportunity for them. The unemployment rate for special needs adults, nationwide, is 83 percent.

“When I see someone who has a challenge, I see someone with a gift who just needs the opportunity to bring it out,” Rabbi Mintz said during his remarks at the groundbreaking.

Toibb told the audience Rabbi Mintz touched his soul by evoking his memories of helping elderly Jewish refugees from Russia in the 1980s.

“I was involved at the time with a preschool. Jews who were being thrown out of Russia had no money, and no place to go. So we made room for them at the preschool. I learned a lot from watching them help with the preschoolers. They had patience, and there was no language barrier. When Yossi told me his vision, I saw it was my vision also,” Toibb said.

He and his wife, Linda, jump started the Friendship Campus capital campaign with a $5 million donation.

“‘You crazy bastard, what are you doing?’ Michael Greenberg said to me. “I said I may be a crazy bastard, but I know what I’m doing. I want to create some noise.”

“Michael told me I’d be the perfect guy to fund this project,” Schwartz recalled at the groundbreaking. “I said I’d be proud to be involved. The vision is spot on. But I have a better idea for fundraising. Let’s find six people to put in $3 million each. I’ll be the first.”

Portia Cohen learned of Rabbi Mintz’s campus vision 15 years ago when he invited her to a Redondo school campus to see a Friendship Circle activity, she told the audience.

“I asked Rabbi Mintz, so where do you go from here? He opened a desk drawer and pulled out a sketch of a campus, with a machine shop, a kitchen, a gym and lots of happy kids. He said he wanted to create a future for these kids, and an environment where they felt loved.”

“I looked at the drawing, and said, ‘You need an architect,” Cohen recalled.

Toibb took on the responsibility of enlisting architect Andy Cohen. His company’s previous projects included The Ritz Carlton at LA Live, the Banc of California Soccer Stadium, and Shanghai Tower, the second tallest building in the world.

“Fortunately, Andy lives in Manhattan Beach. It wasn’t a hard sell. He said he’d be honored to design the campus. Then I told him it was pro bono. That was a harder sell. He asked what I wanted. I said, you tell me. He came back with what he thought was a great design. I didn’t like it. He did a second design. I didn’t like it. I think he thought I was abusing my pro bono privileges. But he treated us like a paying client, and finally he got the indoor/outdoor concept right.”

“It was at the tail end of a conversation when the rabbi said something about needing property for  something special,” Redondo Beach Schools Superintendent Steven Keller told the groundbreaking guests.

The district’s prime location school properties were already leased — one to the Pep Boys on Artesia; and the others to the Heritage Point, Kensington, and Seasons senior housing, all on Pacific Coast Highway, Keller said.

“I dropped the old, ‘Rabbi, I have this lovely property right down from the school school district office. It wasn’t lovely, and I never thought he’d bite.”

The school had recently been vacated by a preschool, and had been poorly maintained.

“On a tour of the property, Harris Toibb asked me, ‘What do we need to make this happen?’ I looked down at his Cole Hahn tennis shoes, and said, ‘Harris, I’ll take your shoes.’”

Toibb responded by asking if Keller minded if he wrote something down. He wrote “One million dollars” on a check and handed it to Keller.

“We’re off to a good start,” Keller recalled saying.

Attorney Jerry Katz, another Manhattan Beach resident, drew up the agreement for a 66 year lease, exclusively for an education, and development center for young adults with special needs. At Keller’s insistence, the agreement requires the new campus to serve the Redondo School Districts’s Transition program for 18- to 22-year-old special needs students.

Rabbi Mintz closed the groundbreaking ceremony by reminding guests that another $12 million is needed to complete the campus, and that bricks on The Pathway of Inspiration are available for $1,000.

Then he disclosed that his vision doesn’t stop with South Bay special needs kids. He said he wants Freedom Campus to host conferences on neurodivergence for educators and scientists from around the world.