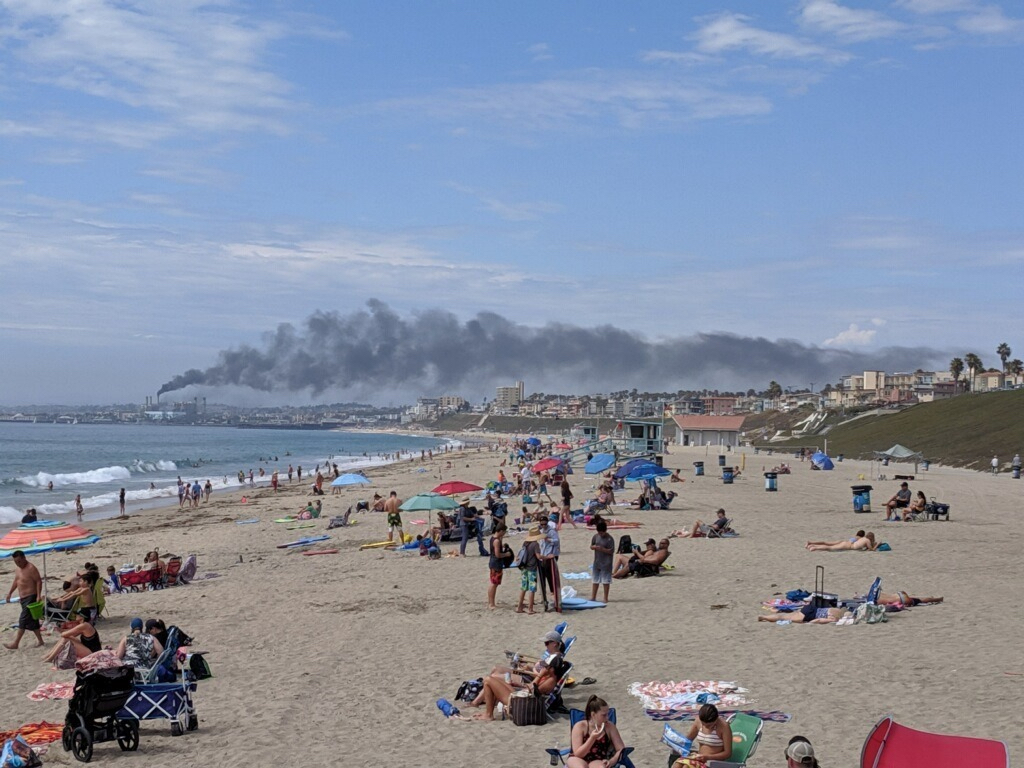 AES power plant on a bad day The plant is scheduled to close in December, but is seeking an extension to operate for three more years. Photo by Nils Nehrenheim

While the coronavirus has tragically cost lives and livelihoods, upending all of our daily means in one way or another, we also have other important, time-critical public issues that require attention, such as the retirement of the AES Redondo Beach power plant.

Ten years ago, this plant was scheduled to permanently retire December 31, 2020.  Retirement of this plant will initiate the demolition and remediation of the power plant site, and also make way for removal of the large power line corridor that stretches all the way to the 405 freeway.  Unfortunately, the California State Water Resources Control Board (WB) is considering extending the operation of this polluting eye-sore, as well as three other local power plants.  A public hearing will take place on July 21, where the WB will vote on these extensions.

Why? Because it is a noisy eyesore that pollutes our ocean and our air, and has blighted our waterfront for decades. It kills everything that enters the 14-foot diameter intake structures that draw in seawater to cool their operations. It spews tons of soot, nitrous oxides, sulfur oxides and fine particulate emissions into our neighborhoods every time it operates. Because of its antiquated technology, when it starts up, it releases black plumes of toxic smoke and emits jet-engine-like noise that scares and awakens everyone nearby at all hours of the night. This behemoth must go.

Don’t be fooled by those with financial conflicts of interest who claim this will be good for Redondo Beach; nothing could be further from the truth. We don’t need their seemingly charitable promises to remediate the site – they’re already obligated to do that by law at no cost to the City of Redondo Beach or its residents — AES has stated this publicly numerous times over the last 20 years. Nor do we need their promises of dedicated parkland — parks and open space are already the only permitted use on the site. They need a zoning change and entitlements that will require a public vote before they can build anything. Their purported promises of parkland and public amenities, if only we allow them to continue their operation, is just a con – don’t fall for it.

So why would AES and the new property owners want to continue to operate this plant?  Money!  And lots of it. Tens of millions of dollars of profit to split at the expense of the local residents and businesses. The actual amount is all a big secret of course, but know that the City of Oxnard recently agreed to stand down from their opposition to an extension for the GenOn power plant in their town because GenOn agreed to pay $25 million to demolish and remediate the site once the three-year extension is over.  One can imagine that there is at least another $25 million waiting for GenOn though, making a three-year extension worth at least $50 million.

Redondo Beach doesn’t need such promises of remediation.  If the new owners’ intent is to walk away from the 50-acre mess they just bought, the City, the County and the State have several tools at their disposal to require demolition, clean-up and remediation, including eminent domain.

The Water Board is accepting public comments on this issue prior to their July 21 hearing. The deadline to submit comments is 12 noon, May 11 this coming Monday.  Email your comments to commentletters@waterboards.ca.gov.  Write in the subject line of your email, “Comment Letter – OTC Policy Amendment.”

Hermosa and Redondo Beach have voted unanimously to oppose any extension.  We hope you will show your support by emailing the Water Board your opposition as well.

Regardless of what you hear, there is nothing in any deal for Redondo or Hermosa Beach except more pollution and noise, and now underhanded threats. All the money will go to out-of-town and out-of-State interests. This retirement date was agreed to 10 years ago. It’s time to move on and remake our waterfront with the beauty and open space it deserves. ER