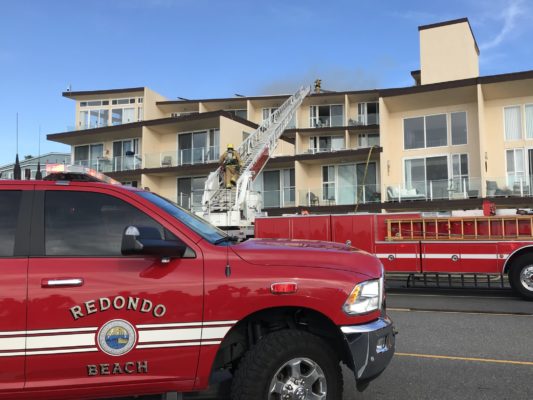 Firefighters climb a Torrance Fire Department ladder truck to get to a fire under the roof of a five-story apartment building along the Esplanade in Redondo Beach on Jan. 27. Photo by David Mendez

It took Redondo Beach firefighters a little more than an hour to extinguish a third-alarm fire at an apartment building along the Esplanade. The extent of the damage was unknown at the time the fire was knocked down, but firefighters believe that no one was injured as a result of the fire.

Firefighters were called to the five-story multi-building complex along the 1700 block of the Esplanade at 2:44 p.m. on Monday, when — according to a neighbor — a resident began to smell smoke coming from an appliance installed in their apartment, and called 911. When firefighters arrived, they found the fire had spread from an attic-like scuttle space above the reporting resident’s unit to three of its neighbors. Firefighters cut holes in the building’s roof to vent the fire and smothered it from below with water.

Initially, firefighters urged residents to shelter in place, but soon changed tactics. Police went throughout the building to evacuate residents. According to Redondo Beach Fire Chief Robert Metzger, firefighters were briefly delayed when a standpipe within the building burst, forcing them to use another nearby source to charge their firehoses.

Four additional fire departments, from Torrance, Los Angeles County, Manhattan Beach and El Segundo, were called to the scene to assist after Redondo escalated the call to a third-alarm, bringing a total of at least a dozen vehicle units to the scene.

Metzger said that he was unaware of any injuries caused by the fire.

“It’s too early to say what caused [the fire],” Metzger said. An inspector would soon be on site to determine how the fire began, the chief added.