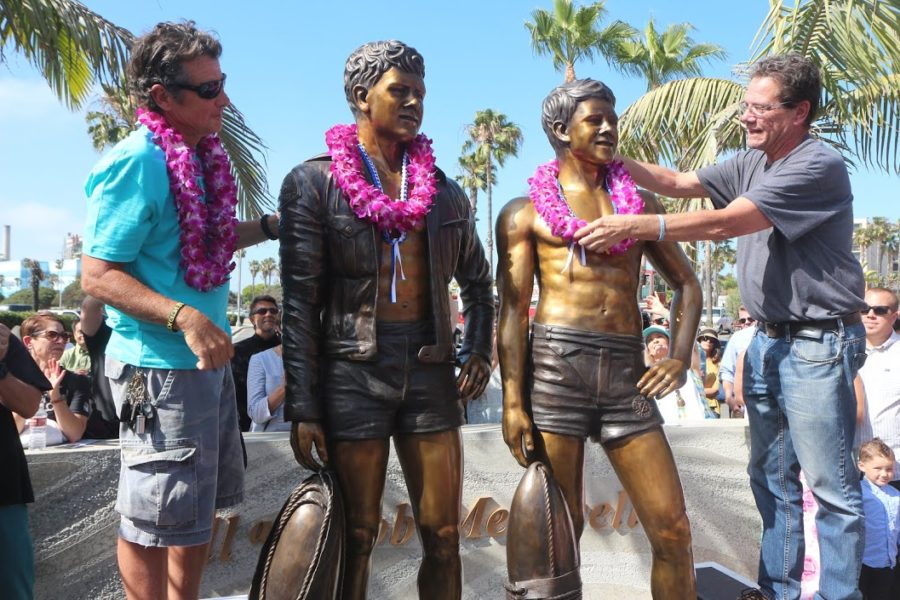 Perhaps the only uncontroversial improvement proposed for King Harbor in 2014 was the unveiling of the Bill and Bob Meistrell statues. Billy and Robbie Meistrell place leis on the statues of their twin parents, who were the founding owners of Dive N’ Surf and Body Glove. Photo

Bob Meistrell died last year at age 84, seven years after his 77-year-old brother Bill died, closing the book on the story of two of the most influential men in the history of surfing and diving.

In January, Redondo Beach approved the installation of a statue memorializing the two men who lived their lives along the waterfront and invented the modern-day wetsuit.

The statue was sculpted by former Hermosa Beach pro surfer Chris Barela and unveiled on  June 4.

“It’s fitting that the the statue be placed in King Harbor, at the entrance to Seaside Lagoon because my dad and uncle drove up and down this street two to four times a day, running between their Dive N’ Surf shop and their boat,” Bill’s son Billy told the hundreds of watermen and water women who attended the unveiling. 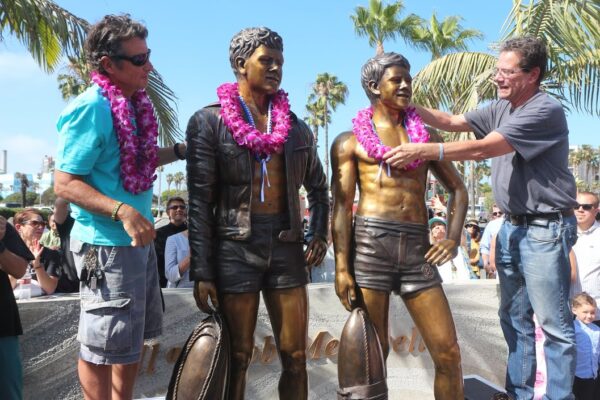 Perhaps the only uncontroversial improvement proposed for King Harbor in 2014 was the unveiling of the Bill and Bob Meistrell statues. Billy and Robbie Meistrell place leis on the statues of their twin parents, who were the founding owners of Dive N’ Surf and Body Glove. Photo

Workman out, pay raises in

In April, Redondo Beach City Manager Bill Workman was terminated following his loss of support from city employees, a result of troubles tracing back to a recession driven pay cut. “He has not been fair, respectful or honest with city employees,” Brad Sweatt, Firefighters Association president and Coalition of Redondo Beach Employees member, said last March. “We have said that he needs to change how he does business or he should be asked to leave.”

In June, Redondo Beach Firefighter Andrew Yamamoto filed suit against the Redondo Beach Fire Department and other past and present city officials alleging, among other things, emotional distress following a temporary firing. Yamamoto was terminated in 2012 following multiple accusations of sexual battery during a nightclub outing. He was reinstated after arguing in an arbitration hearing that his behavior resulted from his drink being spiked with a date rape drug. The next court date in his lawsuit scheduled for Jan. 7.

Voters struck down a November effort to extend term limits for Redondo Beach City Council members and Redondo Beach Unified School board members. The move would have allowed local elected officials to run for a third term. Councilman Bill Brand, in an argument opposing the measure, wrote, “The longer a politician is in office, the more he understands how to sway voters, raise money and build an empire.” 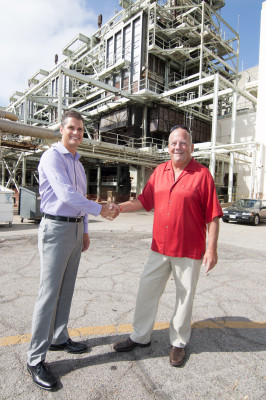 After decades of fratricidal strife between the AES Power Plant and the City of Redondo Beach, AES vice president Eric Pendergraft and Redondo Beach Mayor Steve Aspel joined forces in June to replace the power plant with a mixed commercial and retail development. Photo

In July, AES surprised the community by proposing to replace its aging power plant with the Harbor Village, an 85,000 square feet of commercial real estate development with 600 residential units. Mayor Steve Aspel expressed support for the plan but Councilman Bill Brand questioned whether or not the development is a responsible use of Redondo’s shoreline. Thanks to AES’ initiative campaign, the issue of the land’s zoning will comes to a vote in March, placing the waterfront’s fate in the hands of the electorate.

Tulita and Lincoln Elementary “flipped the switch” this year, using funds from Measure Q. Voters approved Q in 2012 to install solar panels at every Redondo Beach school. The solar panels will save the district $15 million over the next 25 years. School Board member Laura Emdee, who is stepping down to run, unopposed for the Council District 5 seat, credited Measure Q with keeping RBUSD from going into receivership.

Hermosa, Redondo tear down the wall

Redondo Beach Mayor Steve Aspel invoked Ronald Reagan in a decidedly less dramatic act last month than tearing down the Berlin Wall. Instead, Aspel let the effort to tear down the wall on The Strand separating Redondo and Hermosa Beach . The wall’s destruction was part of a $4.6 million project aimed at creating safer spaces for cyclists and pedestrians along Harbor Drive.

In January, RBUSD rolled out a pilot program to test the utility of Chromebooks, Googles’ lightweight,inexpensive laptop. After the initial program of 1,000 students and 35 faculty turned out a success, the district made plans to provide a Chromebook to every student from third through twelfth grade. The program is funded from the $18 million in Measure Q money earmarked for technology. 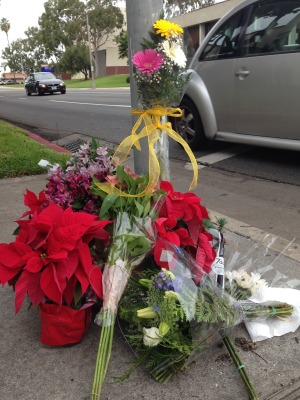 A memorial left at the corner of Pacific Coast Highway and Vincent Street, where four pedestrians were killed and eight others injured. The driver was charged with driving under the influence of prescription drugs. Photo

One week before Christmas, an accident on Pacific Coast Highway in Redondo  took the lives of four people and injured eight others. On Dec. 17, Margo Bronstein ran a red light and struck a group pedestrians who had just left a Christmas recital at St. James Catholic Church. The Redondo Beach resident is suspected to have been under the influence of prescription medications. She was arrested and faces five charges, including four counts of felony vehicular manslaughter.

Shade to turn lights on in Redondo

Miki Zislis, who made his mark in the Beach Cities with the Shade hotel in Manhattan Beach, is opening a second Shade in King Harbor.

“I truly believe Redondo is ready for a big transformation,” Zislis said. “It really needs a rebirth, and I really believe that Shade will be the catalyst of this rebirth.”

“I’ve got rooms that are set up for families, for bachelor parties, groomsmen, girls nights out. I’ve got a few penthouses that are crazy designed. Shade is where people go for their 50th birthday party or their bar mitzvah or their wedding. It’s very community-oriented.” Shade Redondo is scheduled to open in 2015. ER